The Thousand Faces of the City 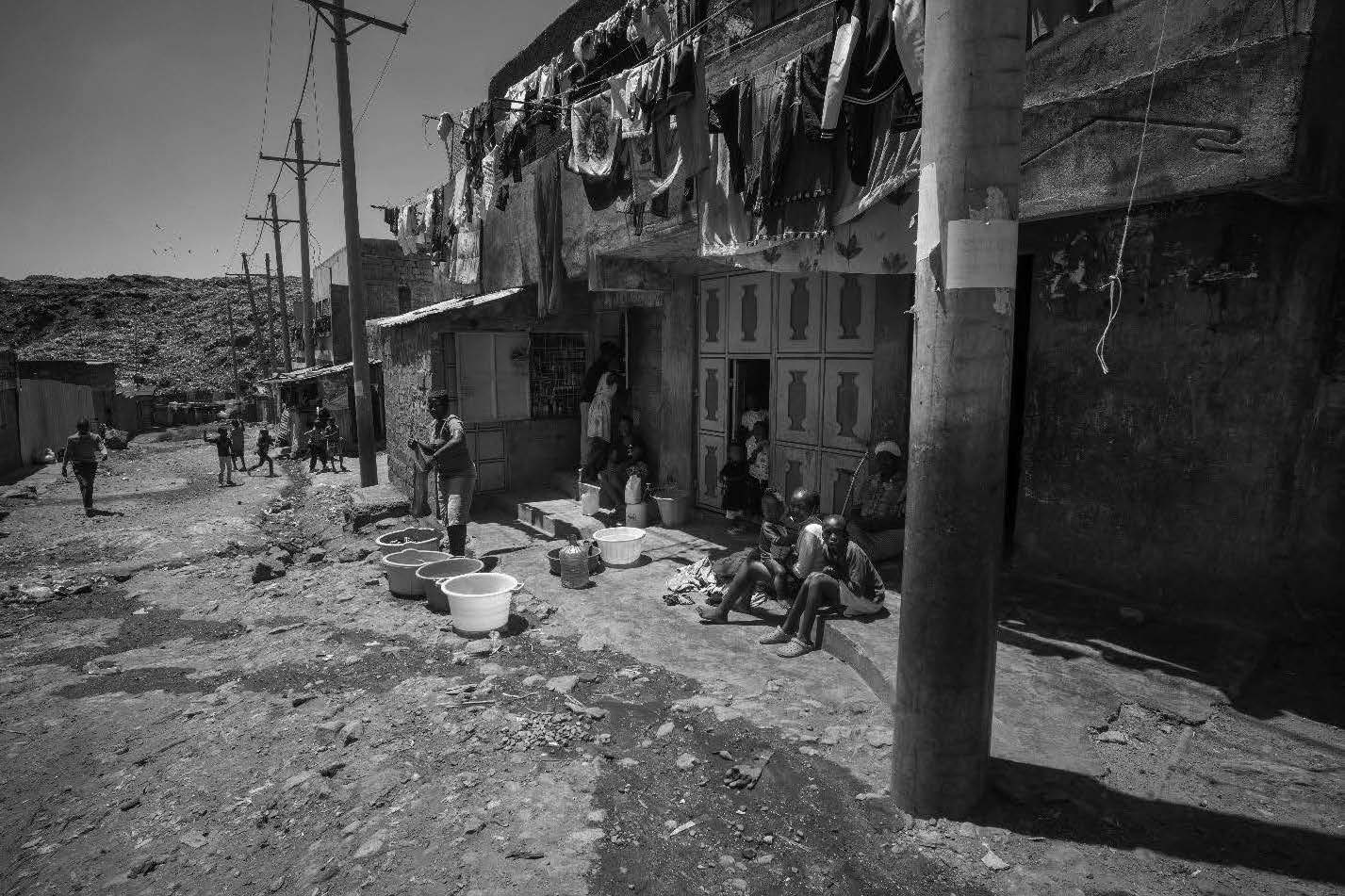 The road into Korogocho 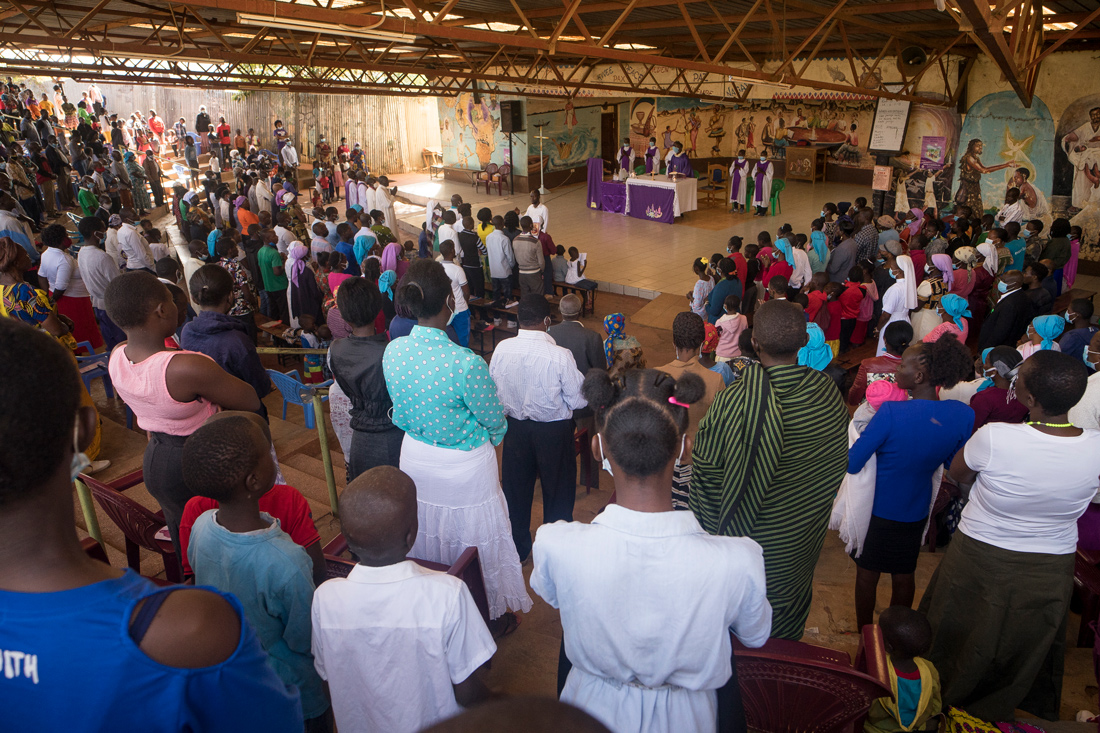 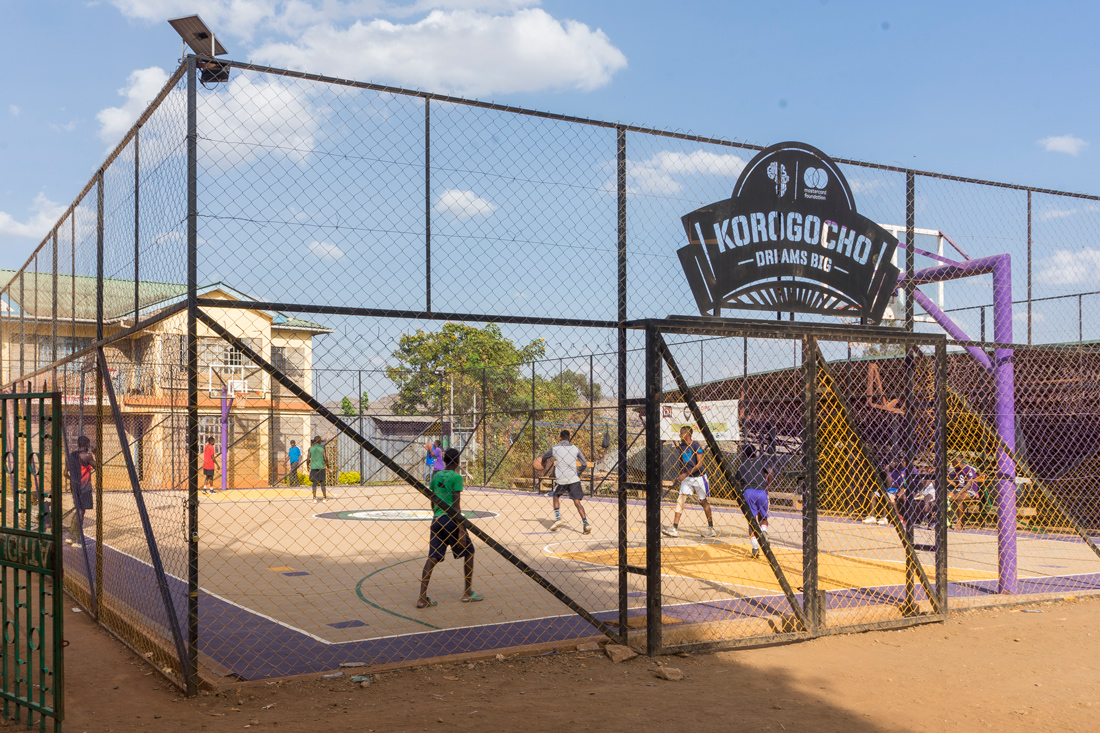 The basketball courts at St. John’s in Korogocho 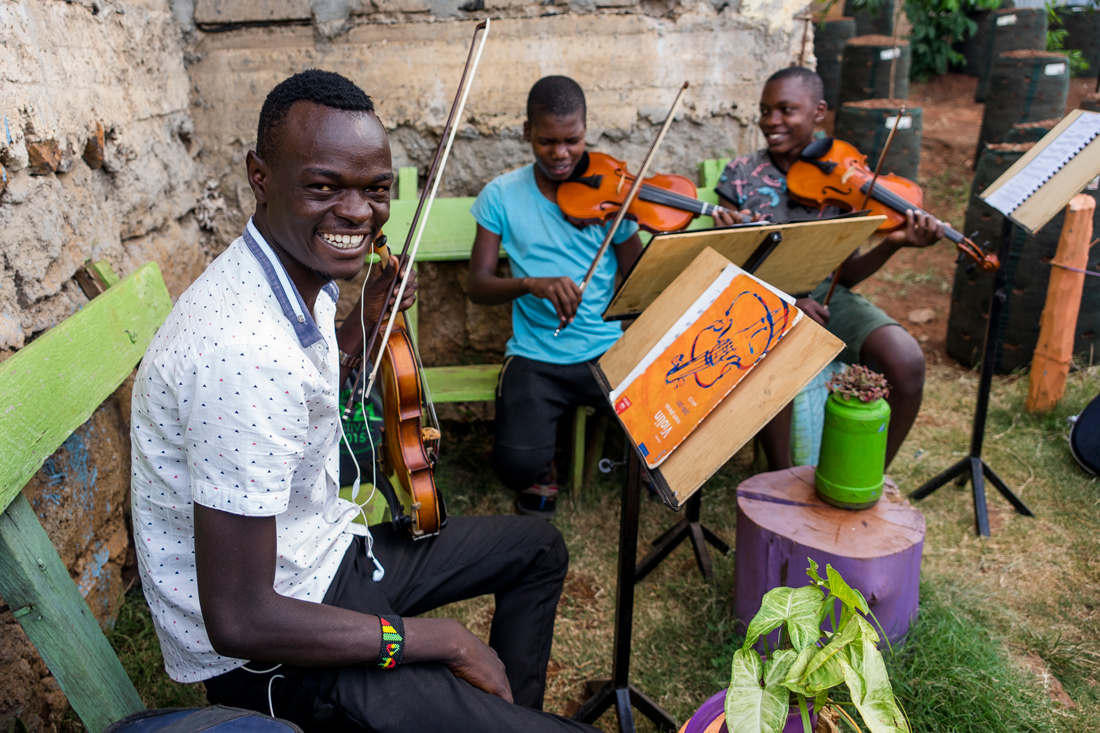 Just over two kilometers separate the parish church of Kariobangi from the chapel of St. John in the Korogocho neighborhood. The asphalt is strewn with bumps that force you to slow down. “Without these speed bumps we would have to deal with accidents every day,” says its parish priest, Fr. Andrew Wanjohi, who accuses the drivers of the boda bodas, as motorcycle taxis are called in Nairobi and  elsewhere in Africa, of being reckless.

As we approach Korogocho, the multi-story buildings mutate into degraded single-story dwellings. Suddenly, at the end of one of the streets, an impressive mountain of garbage appears. It’s just the tip of the iceberg, because we immediately distinguish the huge Dandora dump, the largest in East Africa, where all the waste generated in Nairobi and other parts of Kenya ends up.

Dandora is the most polluted and unhealthy place in the country, which has not prevented the formation of slums or “tin neighborhoods” such as Korogocho, Cannaan or Shashamane, from where thousands of people enter the landfill every day to recover plastics, metals, bottles and anything that can be reused. Although the people who work in the dump contract numerous diseases in this space, the campaigns that have tried to relocate the dump have found great opposition among the inhabitants of the adjoining slums, who would thus see their main means of subsistence disappear. When we arrive in St. John we see countless cables, devices and objects of all kinds rescued from the dump and waiting to find a new life in the hands of future buyers.

The Korogocho slum is part of the territory of the Kariobangi parish, which was established in 1974, the same year that the Comboni Missionaries arrived. Later three other religious congregations would be incorporated: the Missionaries of Charity, the Franciscan Missionary Sisters for Africa and the Missionary Servants of the Word. The approximately 20,000 Catholics in the parish – 18% of the population – fill to overflowing the eight Sunday masses that are celebrated in the three parish churches: the central one in Kariobangi, dedicated to the Holy Trinity; the chapel of St. John in Korogocho, and that of San Daniel Comboni, in Huruma. The four priests of the parish, some nuns and about thirty catechists, mostly women, ensure the liturgy and preparation for the sacraments. The parish has an average of 500 baptisms a year, most of them babies, but only about twenty marriages, which gives an idea of the family crisis in the area.

The four missionary sisters, Servants of the Word, three Mexicans and one Kenyan, contribute much through their charism to the task of evangelization. According to Fr. Wanjohi, “it is a blessing to have these sisters in the parish. They move through all the neighborhoods without fear of places considered dangerous and visit and pray with the families.” The nuns have created a network of biblical groups that are, at the same time, apostolic teams. One of them, Sr. Maria de la Luz Gonzalez affirms that “it is important to have the Word of God in the heart, because without it there is no change in life and one does not live, but rather one survives.”

To the biblical groups and other apostolic groups of adults and youth are added the “base communities,” the authentic center of parish life. According to the parish priest, “they are small domestic churches, made up of several families, which meet weekly for Christian formation and respond to the requests for help from the sick and the poor. Only later are many other projects animated from the parish.”

One of the fields where the Church’s action is most necessary is in education. The parish manages five primary schools and one secondary school, where some 1,600 boys and girls study. They all offer quality school education and canteen services, although only St. John’s Primary School is in Korogocho. In this neighborhood there are two other public schools that are very crowded, so many boys and girls study outside the slum, for example in the three centers managed by the Franciscan Missionary Sisters for Africa that maintain exceptionally low school fees to facilitate access to education for children from disadvantaged backgrounds.

During the 1990s, AIDS hit Kenya hard and a large generation of orphans arose. To welcome them, the Comboni Missionaries opened the Watoto Wetu (Our Children) school in Kariobangi, which now operates as a primary school. In those years, the Comboni Sisters founded the Comboni Health Program (CHP) in Korogocho – today managed by the Comboni Sisters – to accompany HIV-positive people. The government of Kenya provides retro-virals free of charge and the center is in charge of carrying out diagnostic tests and personalized follow-up of patients, some of whom take complementary medications against tuberculosis, meningitis and other occasional illnesses. The CHP, whose medical team is made up of a doctor, a psychologist, several nurses and physiotherapists, in addition to a social worker who regularly visits the sick and makes sure they take their medication, also supports the infirm with food they need. During our visit, the accompanied patients were 671, of which 70% reside in Korogocho.

In the Kariobangi parish compound, there is also a physiotherapy center for children with mobility problems two days a week. This project works in collaboration with the Ruaraka Uhai Neema Catholic Hospital in Nairobi. However, the largest health structure in the parish is the health clinic run by the Comboni Sisters in Kariobangi, where hundreds of people receive medical care every day.

In 1990, the Comboni missionary Fr. Alex Zanotelli began an experience of insertion in a humble house in Korogocho. Other missionaries joined the Italian, and from that place evangelization and human promotion in the slum were promoted. The lack of personnel forced this community to close in September 2014, but its mark remains to this day.

One of the projects that arose then is the St. John Sports Society, which another Italian Comboni Missionary, Fr. Daniele Moschetti, started in 2003. Korogocho is not a pleasant place to live, there is not a single public park where young people can meet to develop activities that keep them away from the danger of alcohol and drugs. Therefore, the space next to the St. John chapel was converted to build a soccer field and a basketball and volleyball court. They are the only sports fields worthy of the name that exist in the slum. In addition, a building was set up for boxing, karate and taekwondo practice. It was only necessary to open the doors so that these spaces were filled with young people who wanted to improve themselves. The pride of the St. John Sports Society is the boxer Elizabeth Akinyi, who represented Kenya at the 2020 Tokyo Olympics.

Music moves young people as much as sports. In 2007, the Comboni missionaries participated in the foundation, also in the St. John chapel area, of the Ghetto Classics Music Programme, a nationally and internationally recognized music school that has trained hundreds of young people in Korogocho.

The library of St John’s is another of the jewels that the Comboni Missionaries have bequeathed to Korogocho. With thousands of volumes and approximately 300 reading stations distributed in several rooms, the library offers a serious study environment for young people who mostly live in homes where it is almost impossible to find an appropriate space to advance their education.

All these social initiatives were born with the aim of uniting and creating ties between people in a place where ethnic divisions are manifest and where violence has been present in moments of social crisis, such as in some of the last elections.

Attention to the most vulnerable in all stages of life is what best defines the social commitment of the Kariobangi parish. For 30 years the Pro-life program has been helping young women who suffer gender-based violence or are experiencing a premature pregnancy. Ann and Georgina are specialized social educators and work full time listening to these girls and raising awareness in schools and families. For the most serious cases of young people who must leave their families, the Missionaries of Charity have a space to welcome them in their Hurumu community.

Also the most impoverished, abandoned children with neurological problems, as well as disabled people or the mentally ill have found a home among the followers of Saint Teresa of Calcutta. One is not allowed to take photos in Hurumu House, but walking through those rooms and seeing the affection with which the sisters accompany and care for these people, you feel that there is hope for humanity.

Another challenge in the urban periphery where the parish is located is that of street children. Many families cannot secure food or school fees for their children, so some decide to make a living on their own, often in the Dandora dump.

There they discover the harshness of life, which leads many of them to drug use. To try to recover this wounded youth, both the Franciscans and the Comboni missionaries have created specialized programs through which they accompany hundreds of these young people. For their part, the Comboni sisters have been running the Kariobangi Women Promotion Training Institute since 1992, a professional school where a hundred girls with problems of social integration can choose between three specialties: tailoring, hairdressing and beauty or hospitality. The courses last one  year and the students receive an official degree from the Kenyan government that allows them to  face life with a better chance of success.

In this non-exhaustive list of initiatives in favor of life, we must mention the Kariobangi  Cheshire Home managed by the Franciscan Sisters. With capacity for 40 people, this home currently  accommodates 26 elderly people. According to the director of the center, the Indian nun Lydia D’sa, “the protection of the elderly is something very important in African culture and although it  continues to be so in rural areas, in the cities poverty is very great, people move frequently and the situations are very complicated. The elders who are in the center have no one in  the world, except ours.” In addition, the Franciscans offer food three days a week to another 260  elderly people who live in the neighborhoods of the Kariobangi parish.

More space would be needed to tell about the evangelizing service and human and social promotion that is being carried out in the parish of Kariobangi. Many names and initiatives have been left out. This work is an example of synodality, its promoters walk together, synergies are created, challenges identified and acted upon.