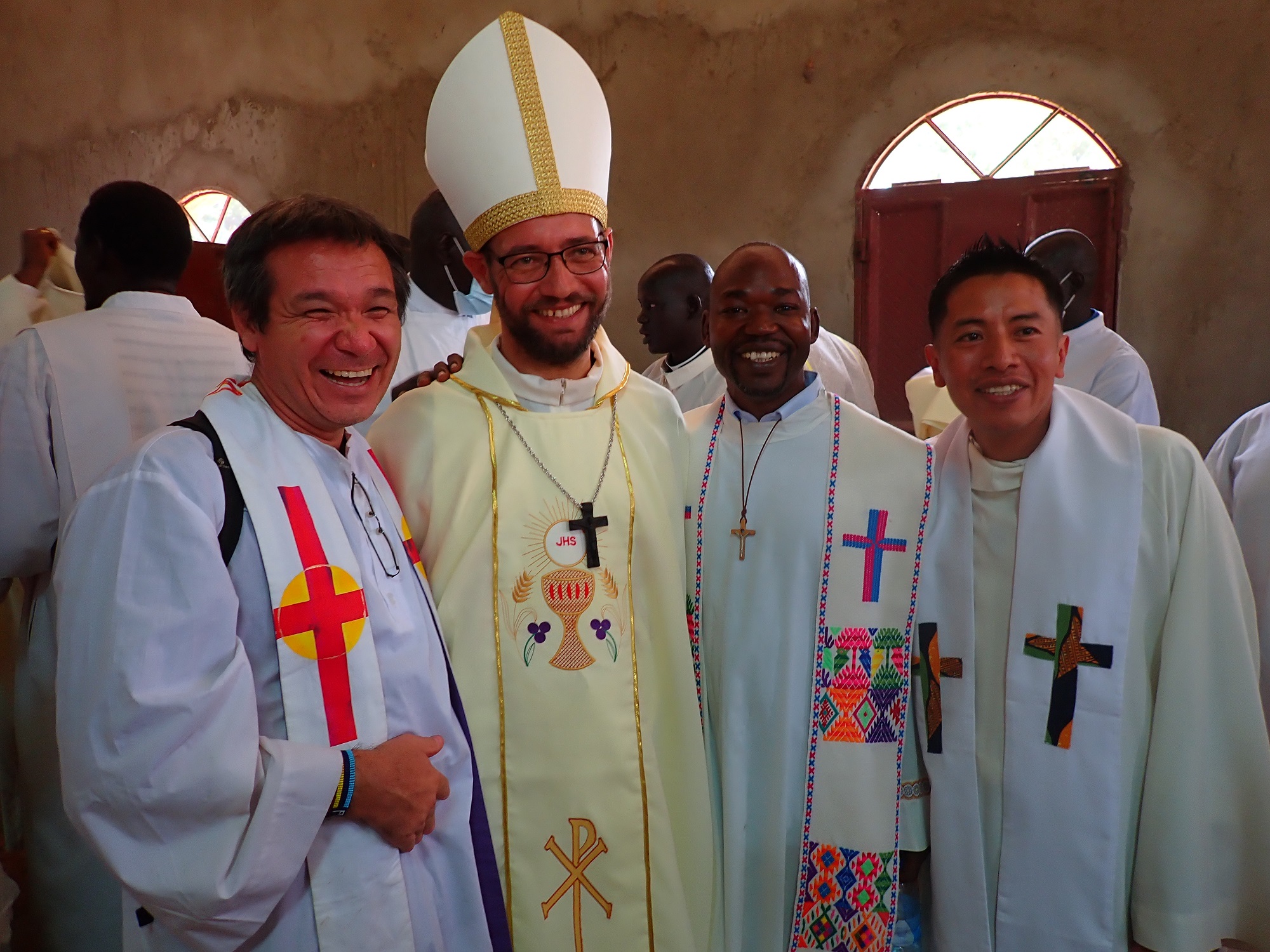 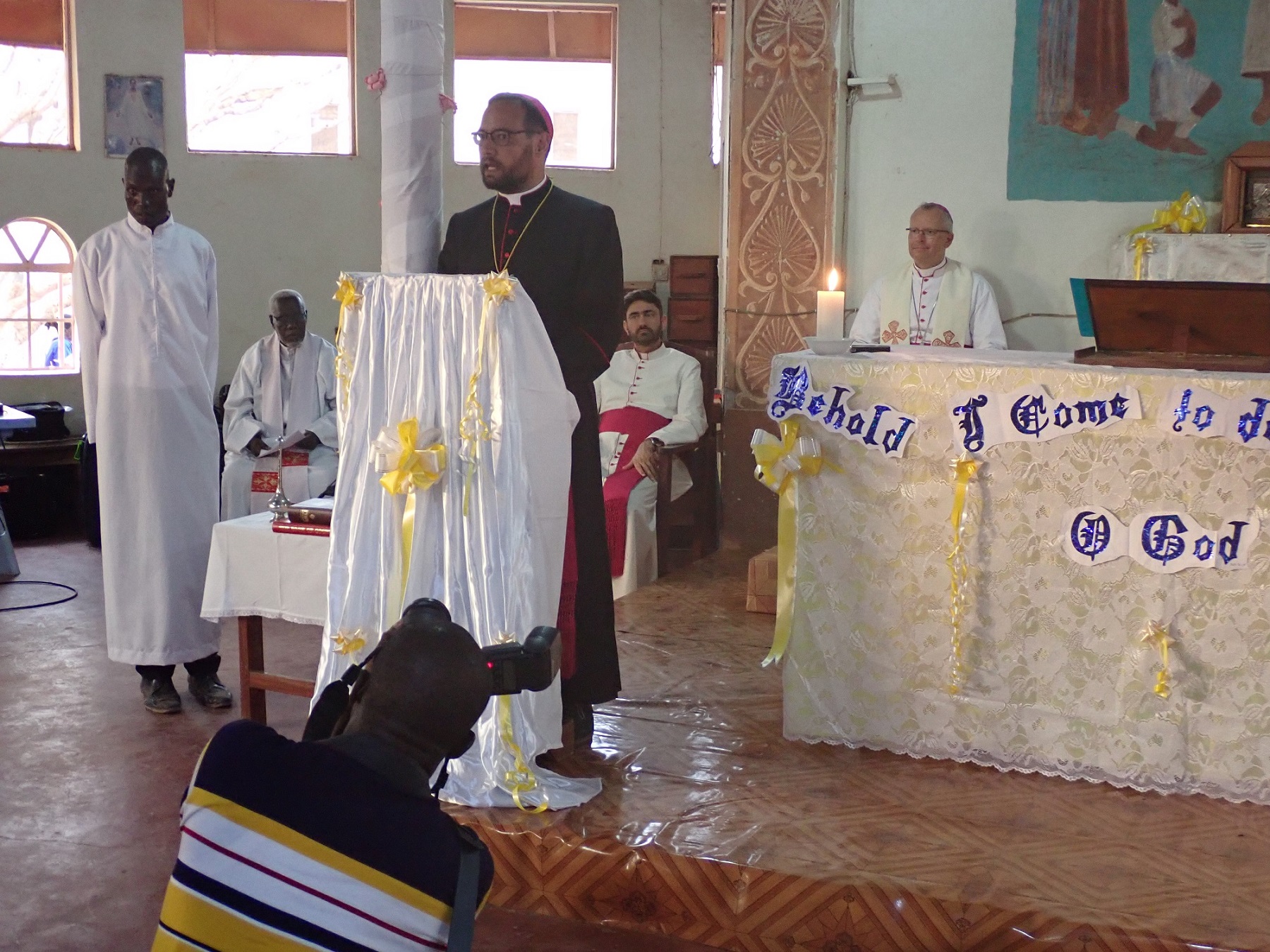 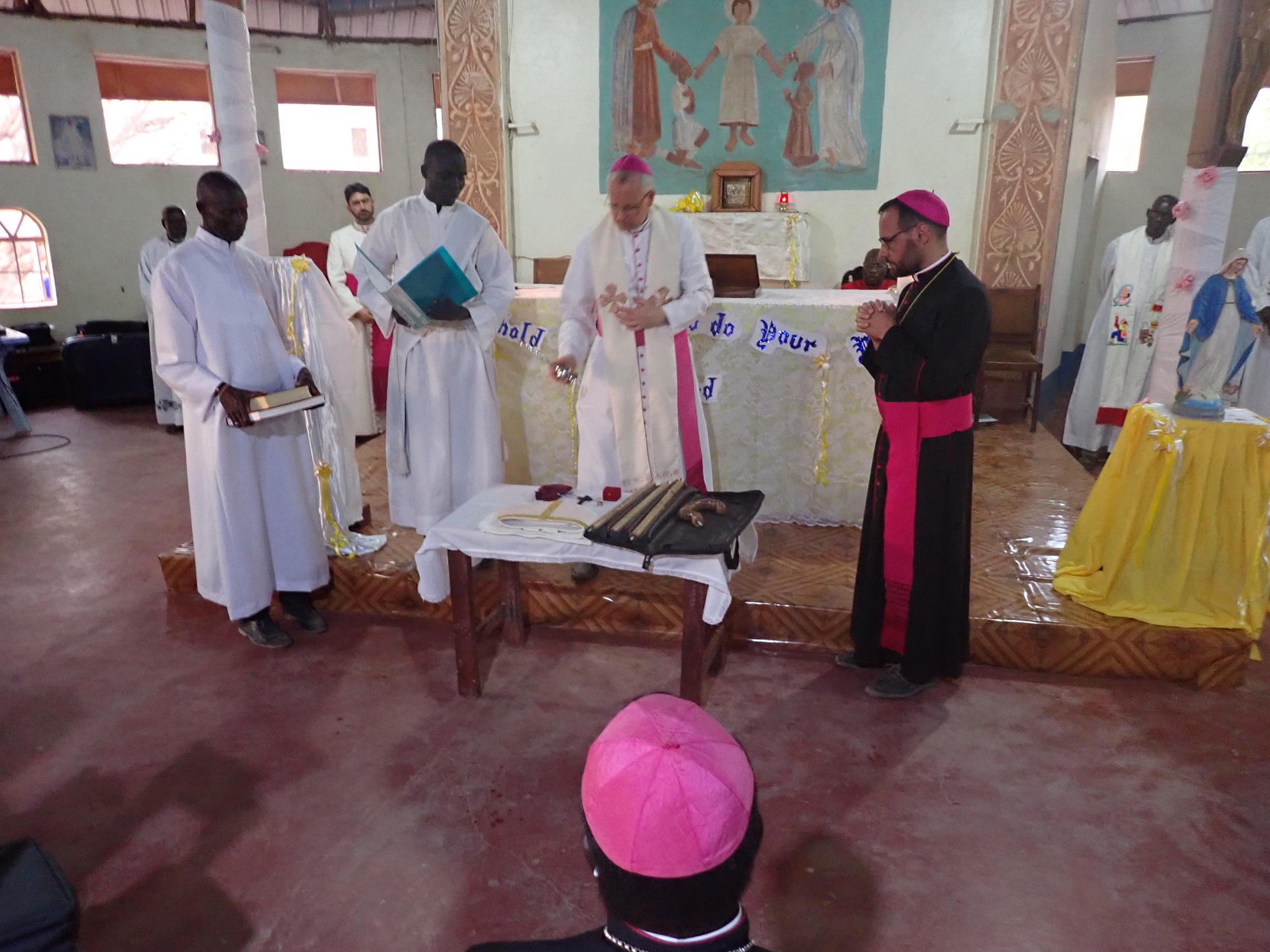 The blessing of the mitre. 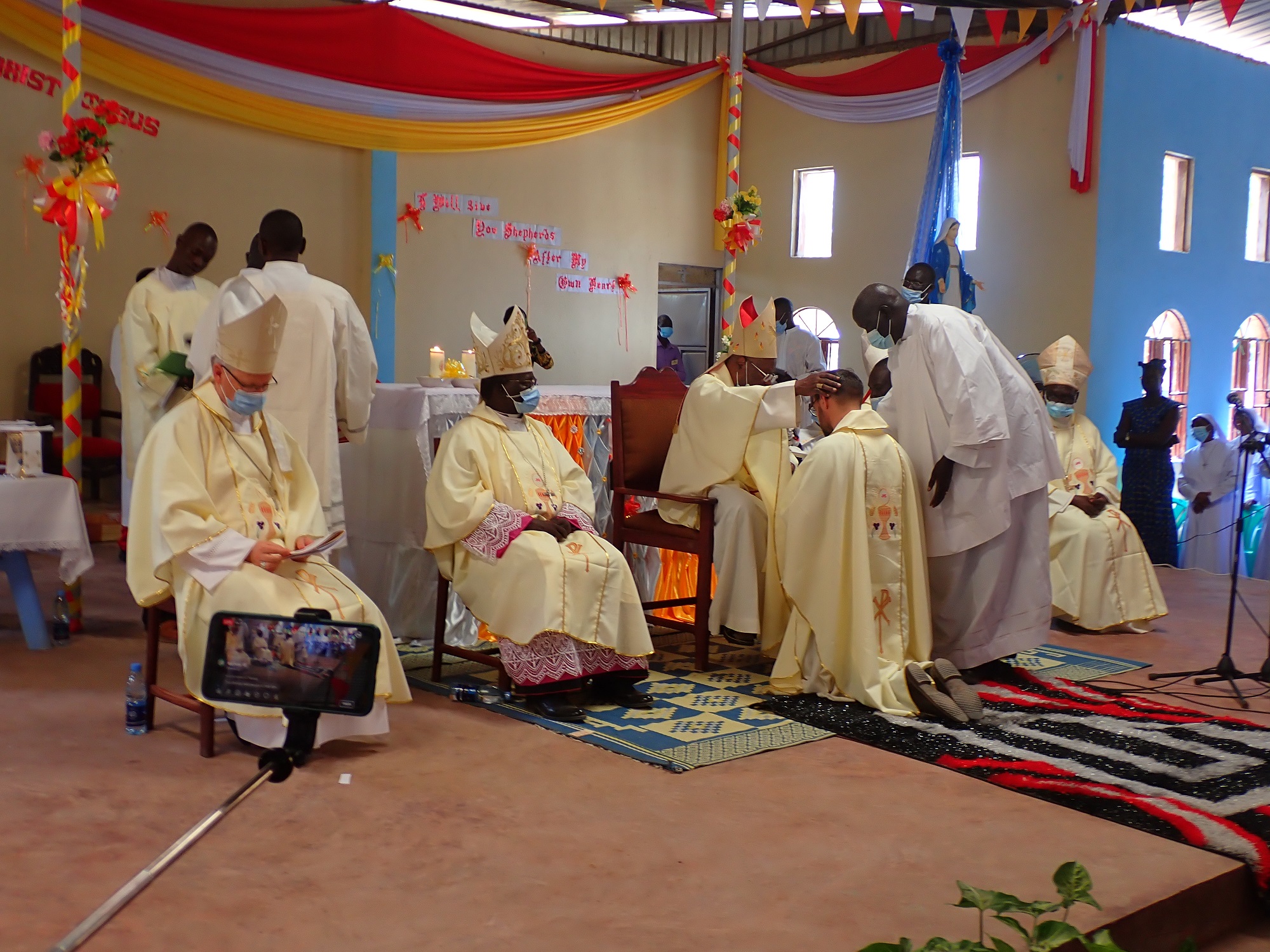 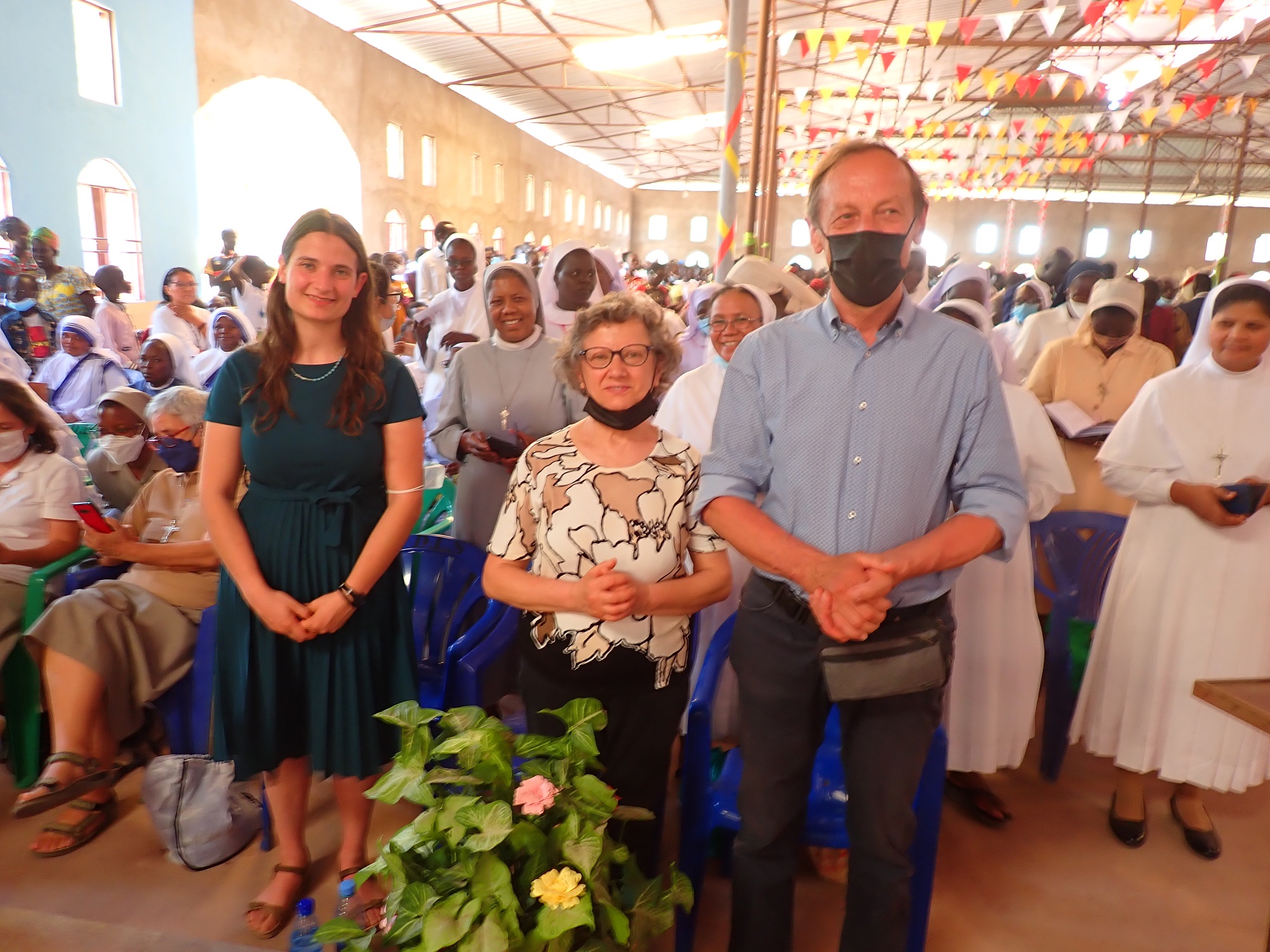 Christian’s parents and sister were able to attend the ordination. 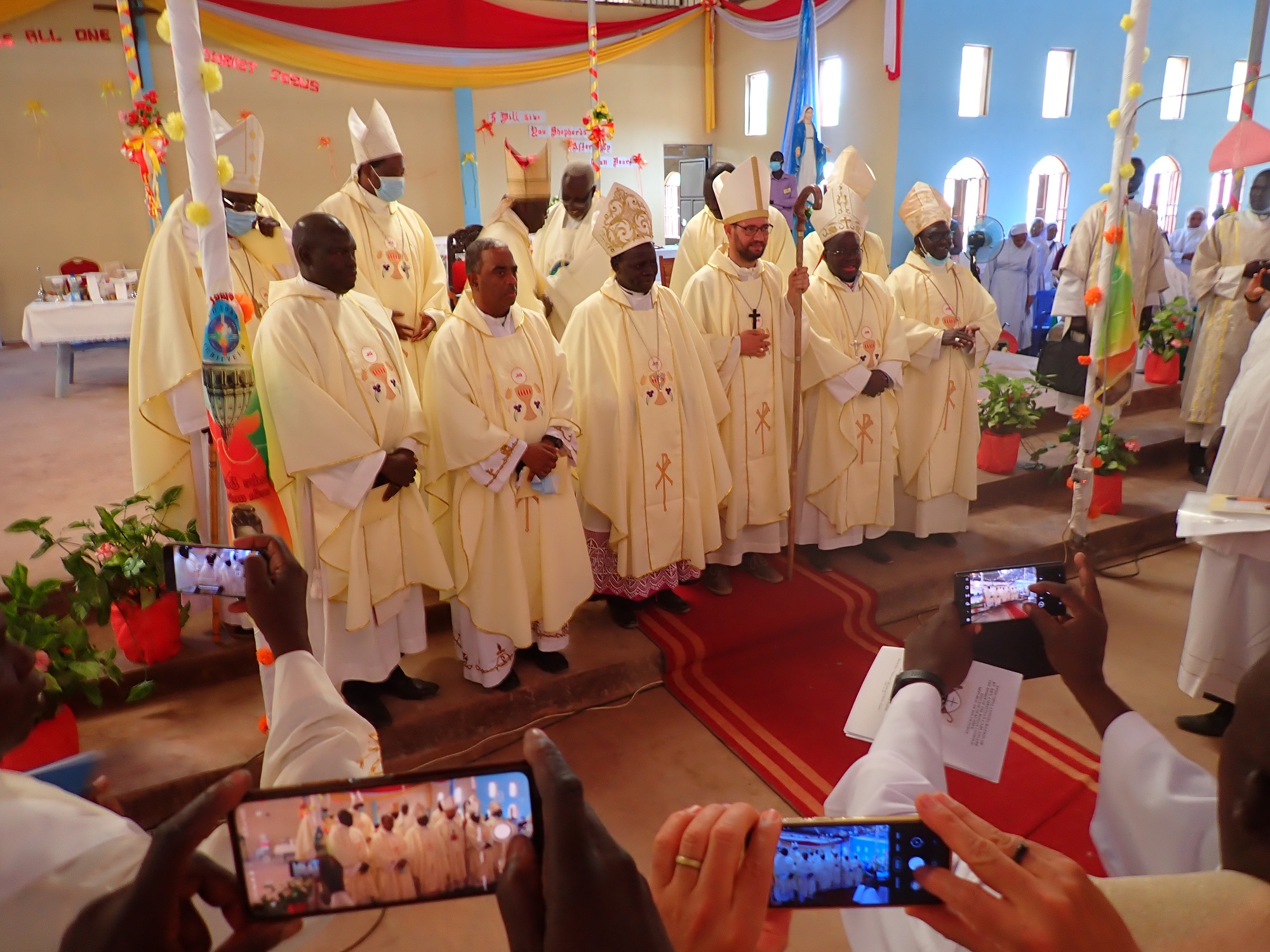 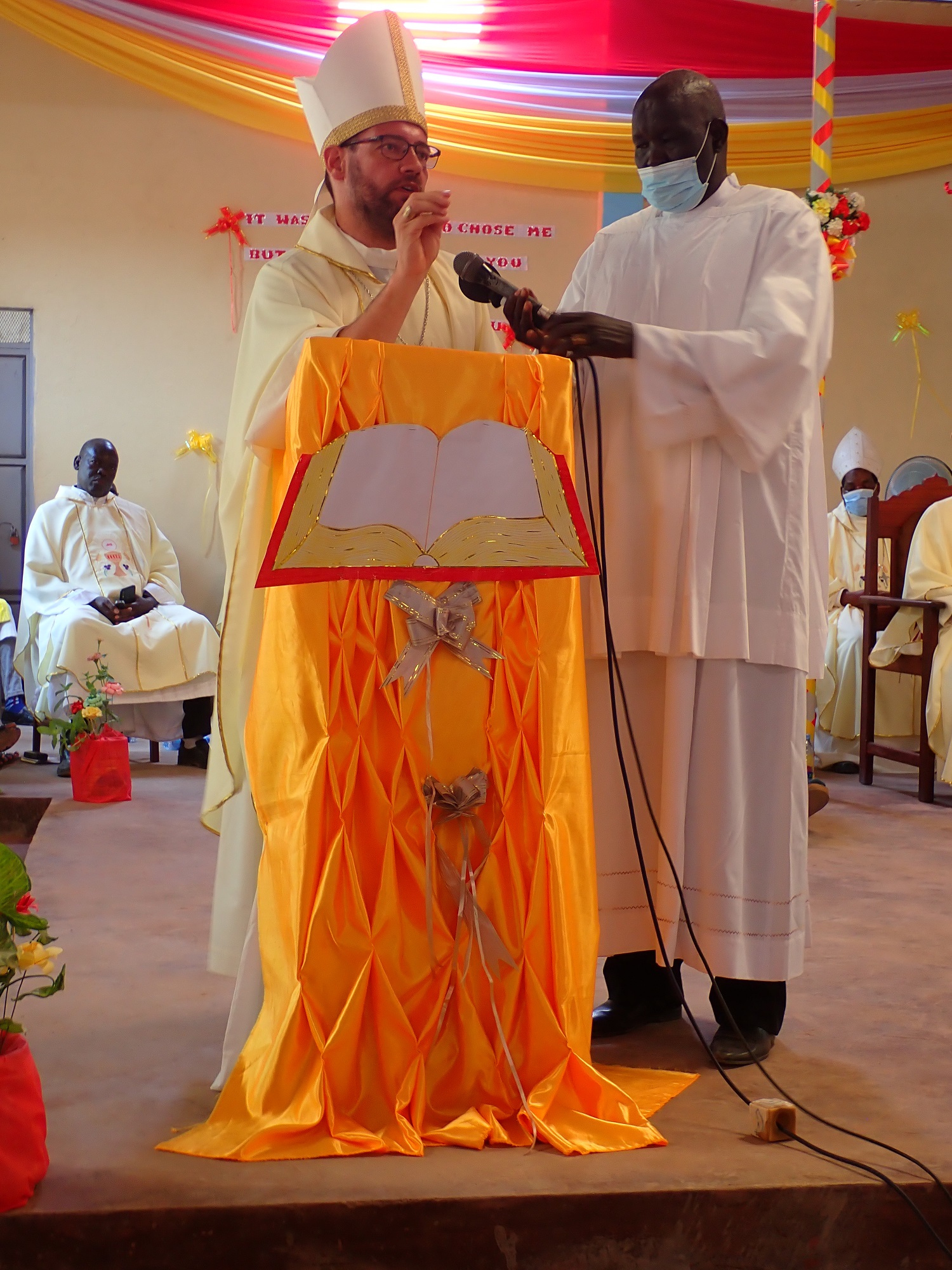 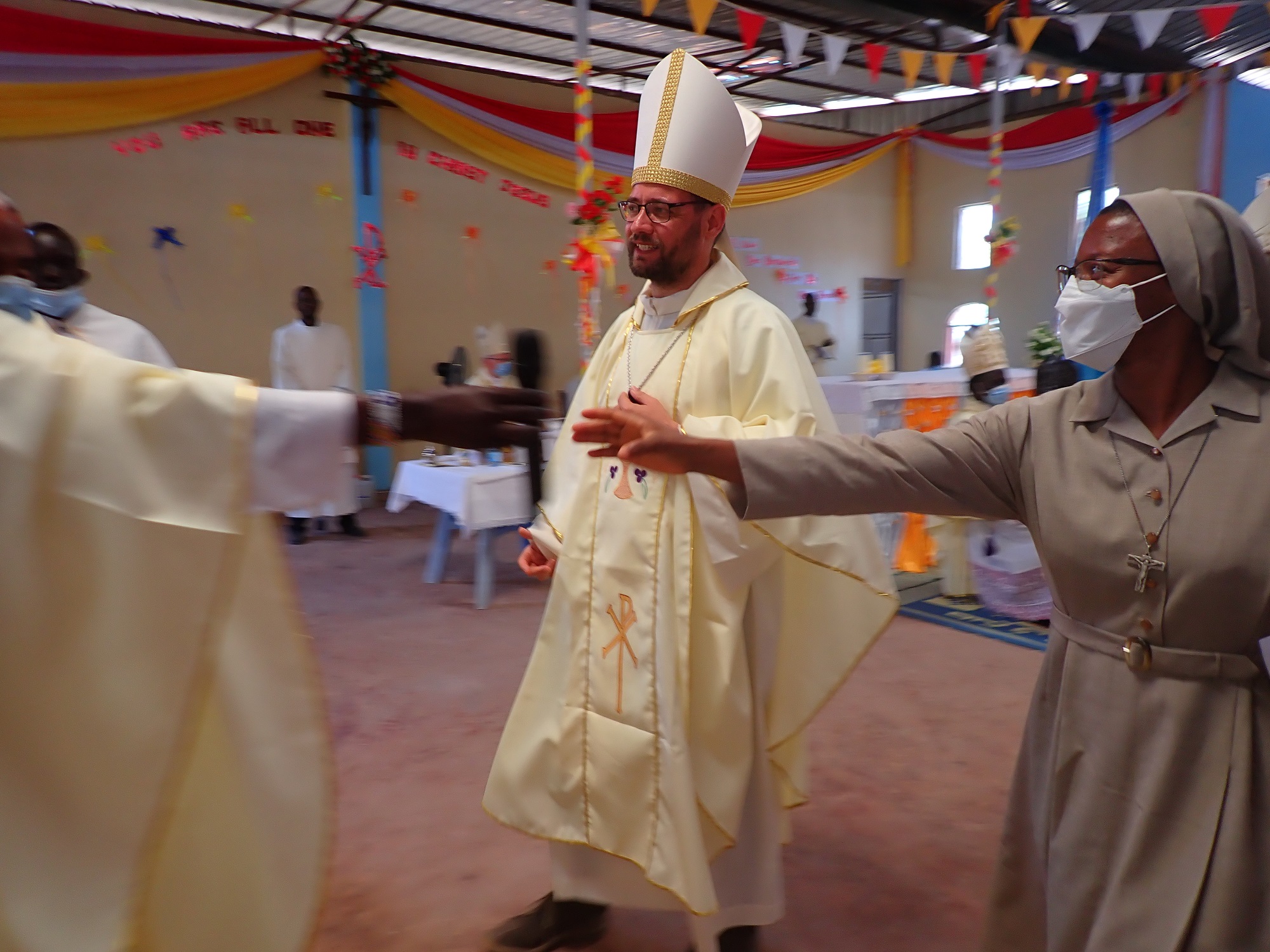 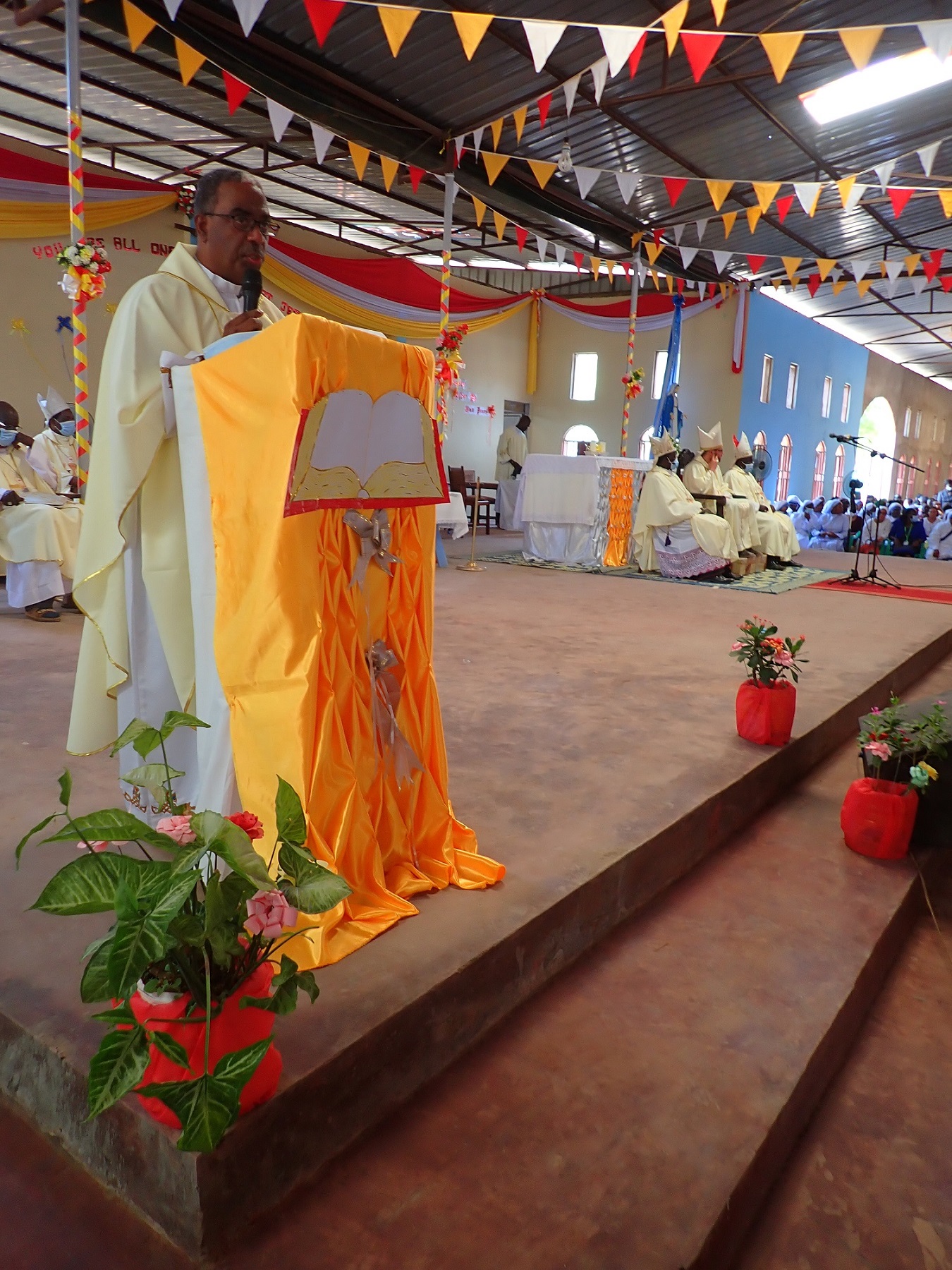 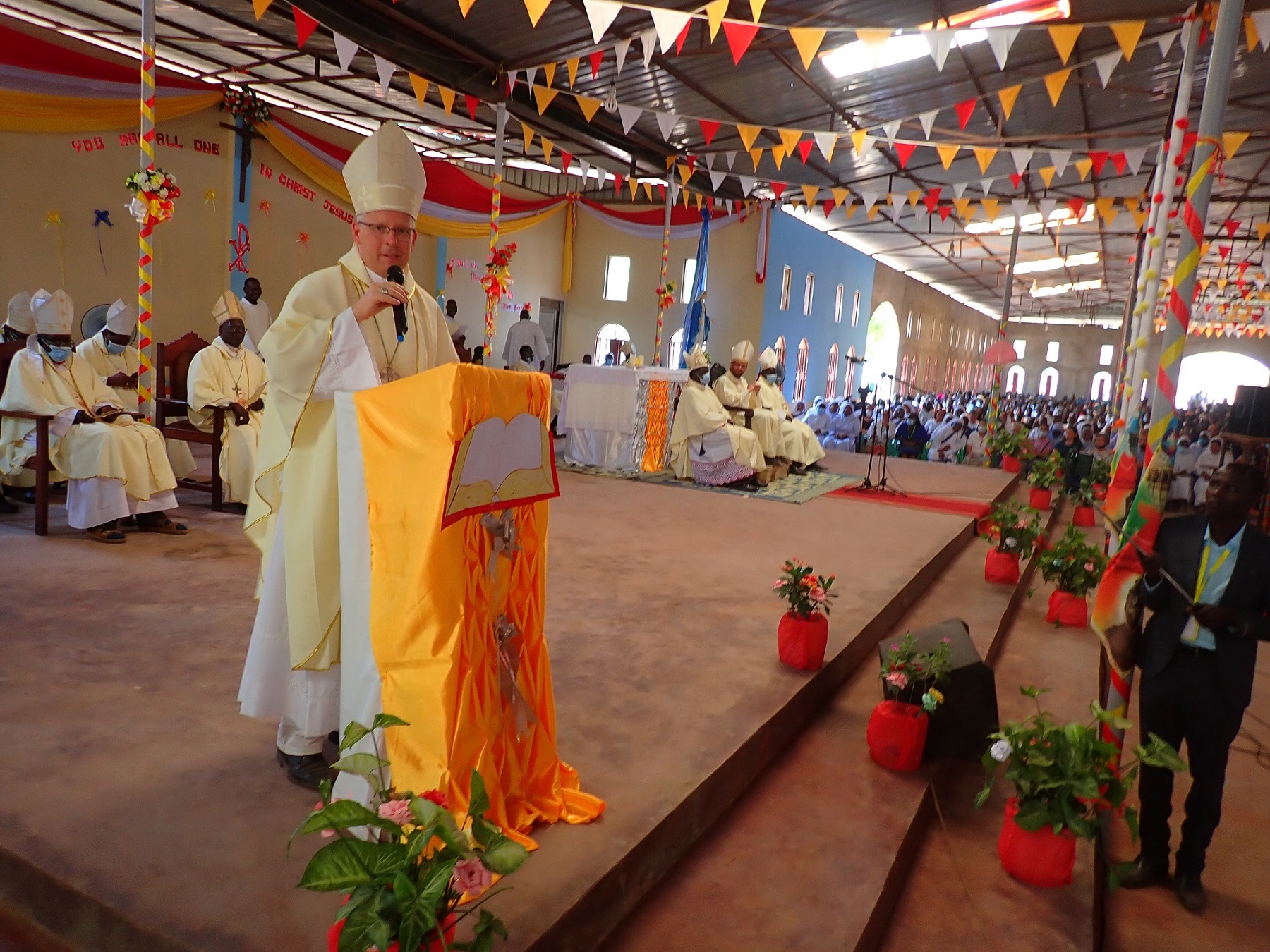 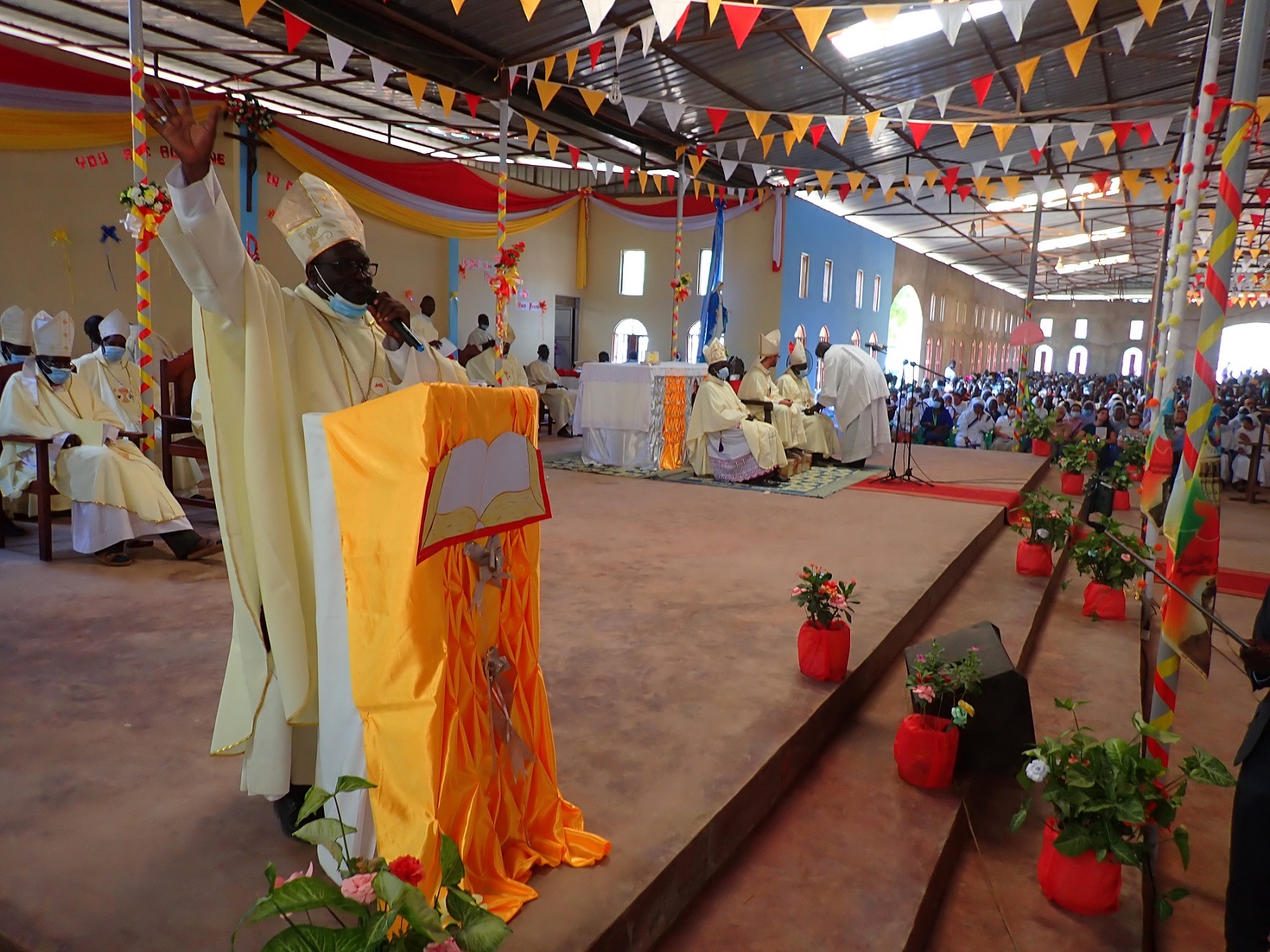 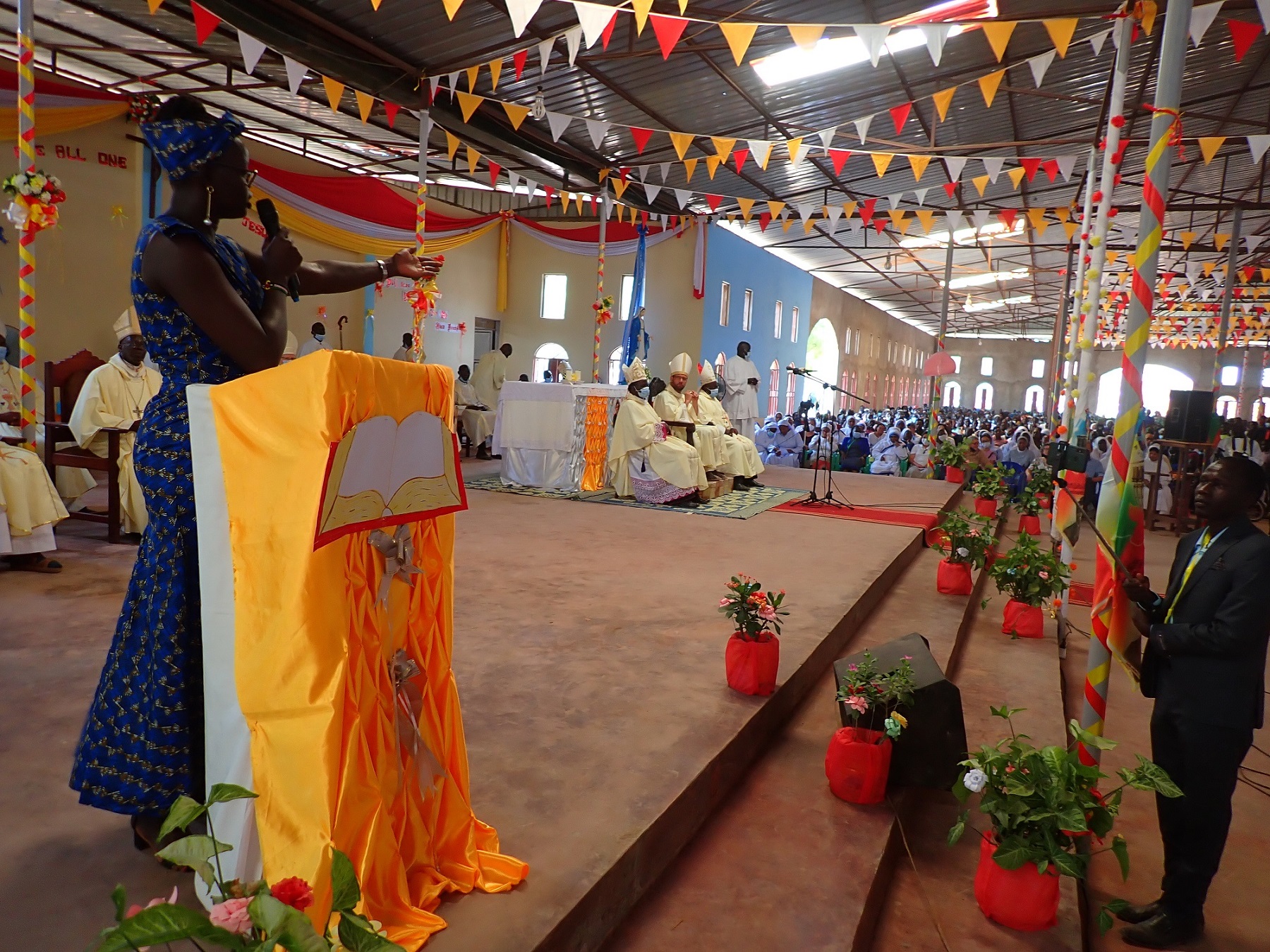 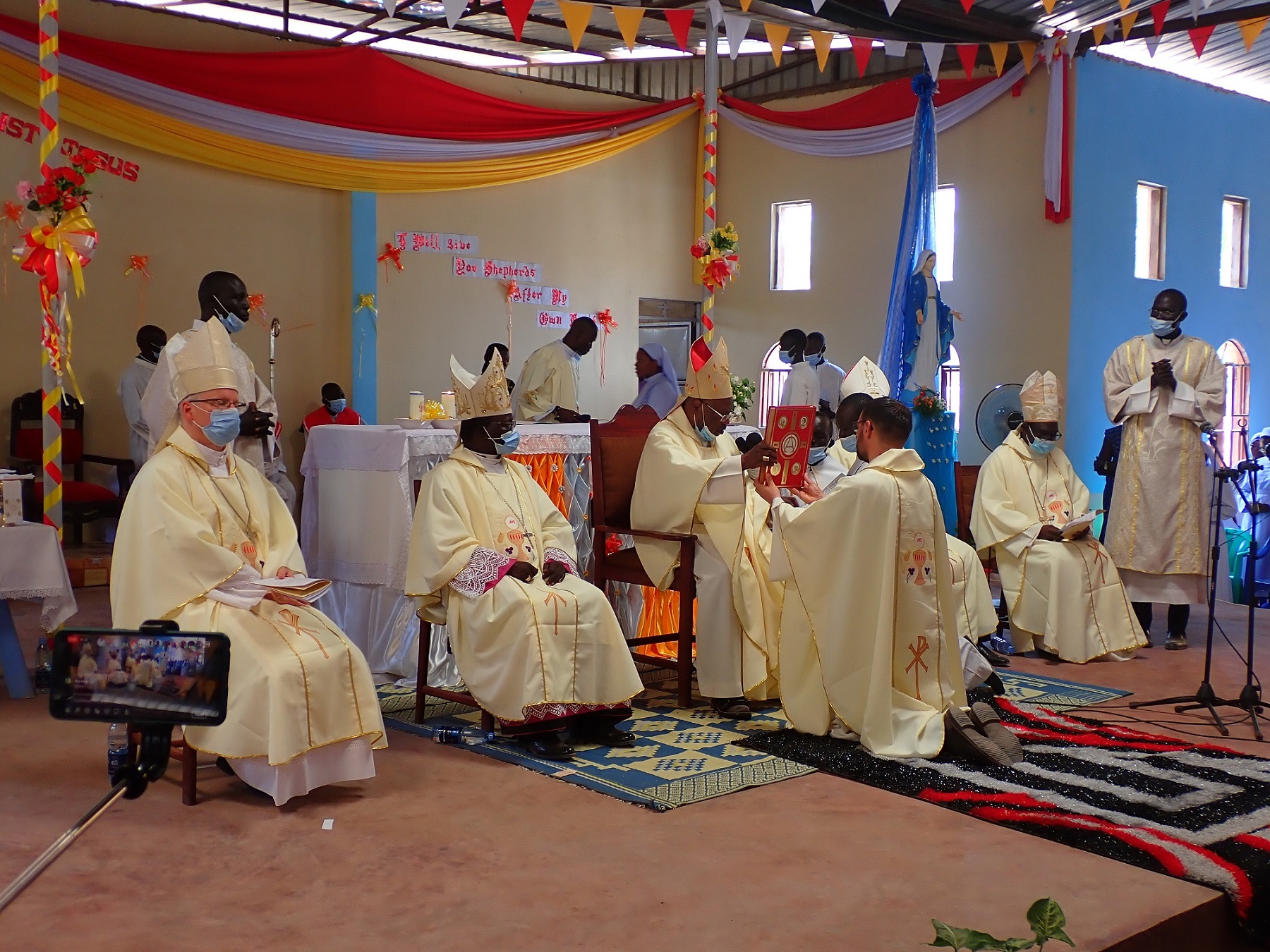 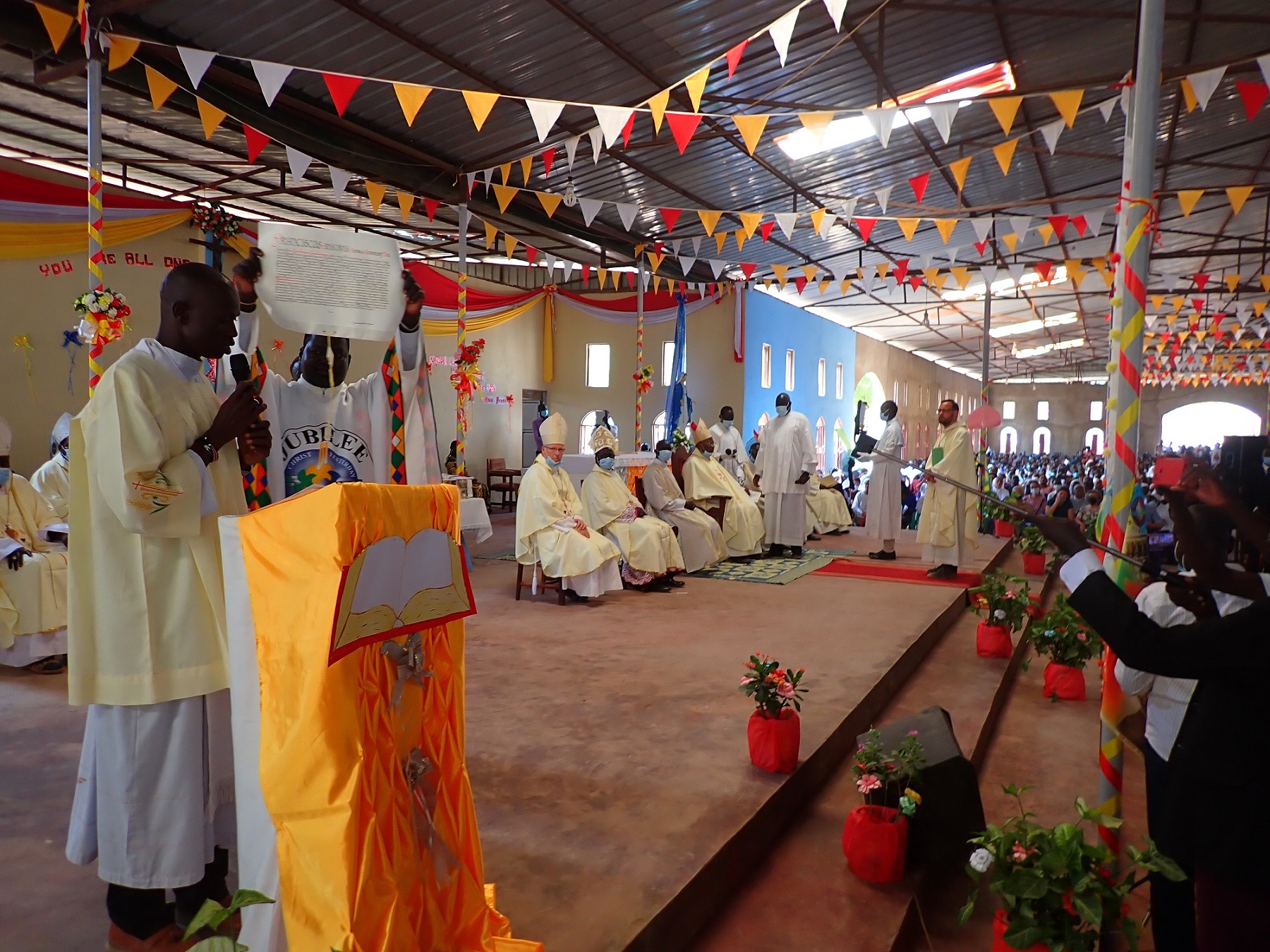 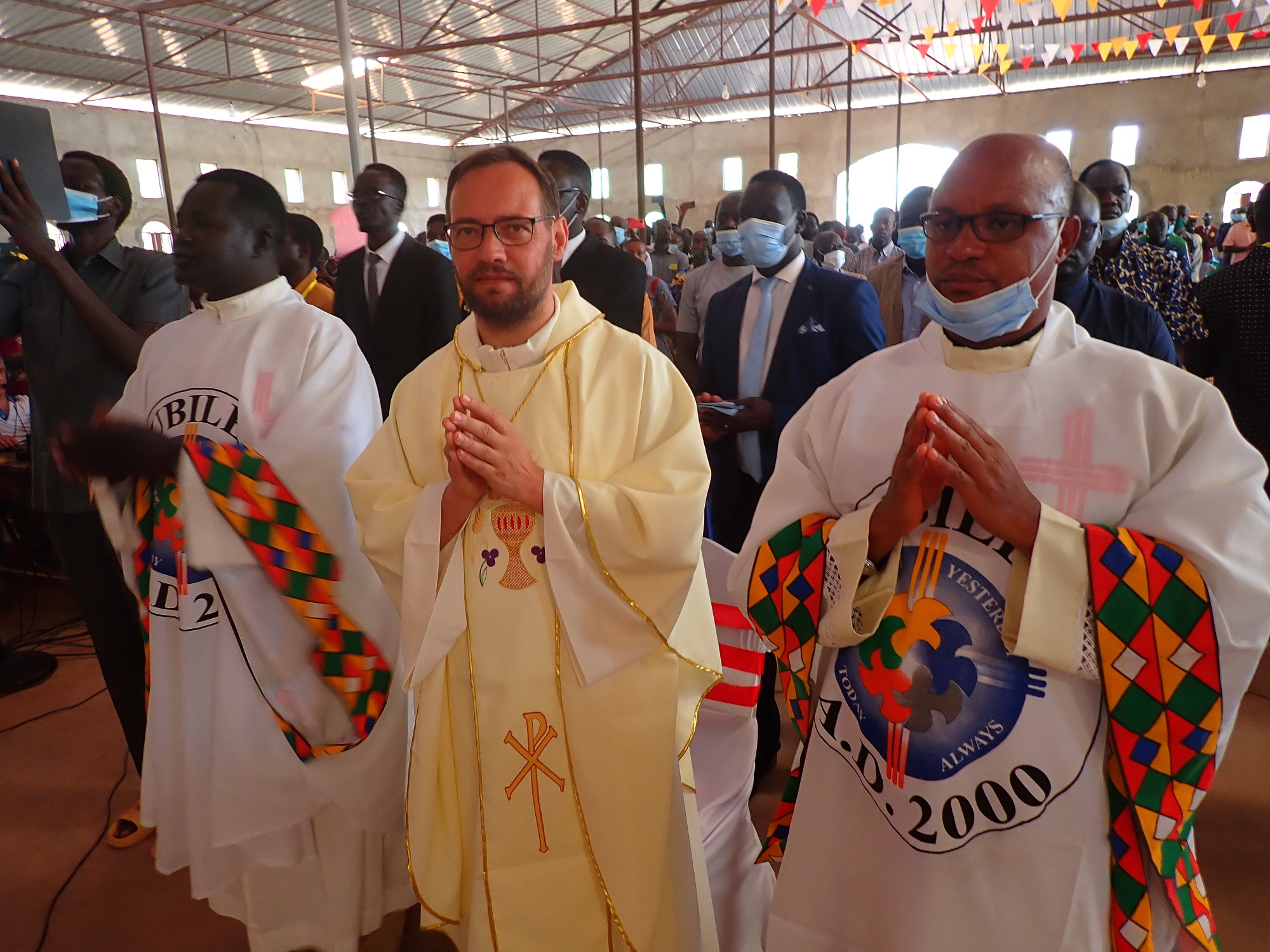 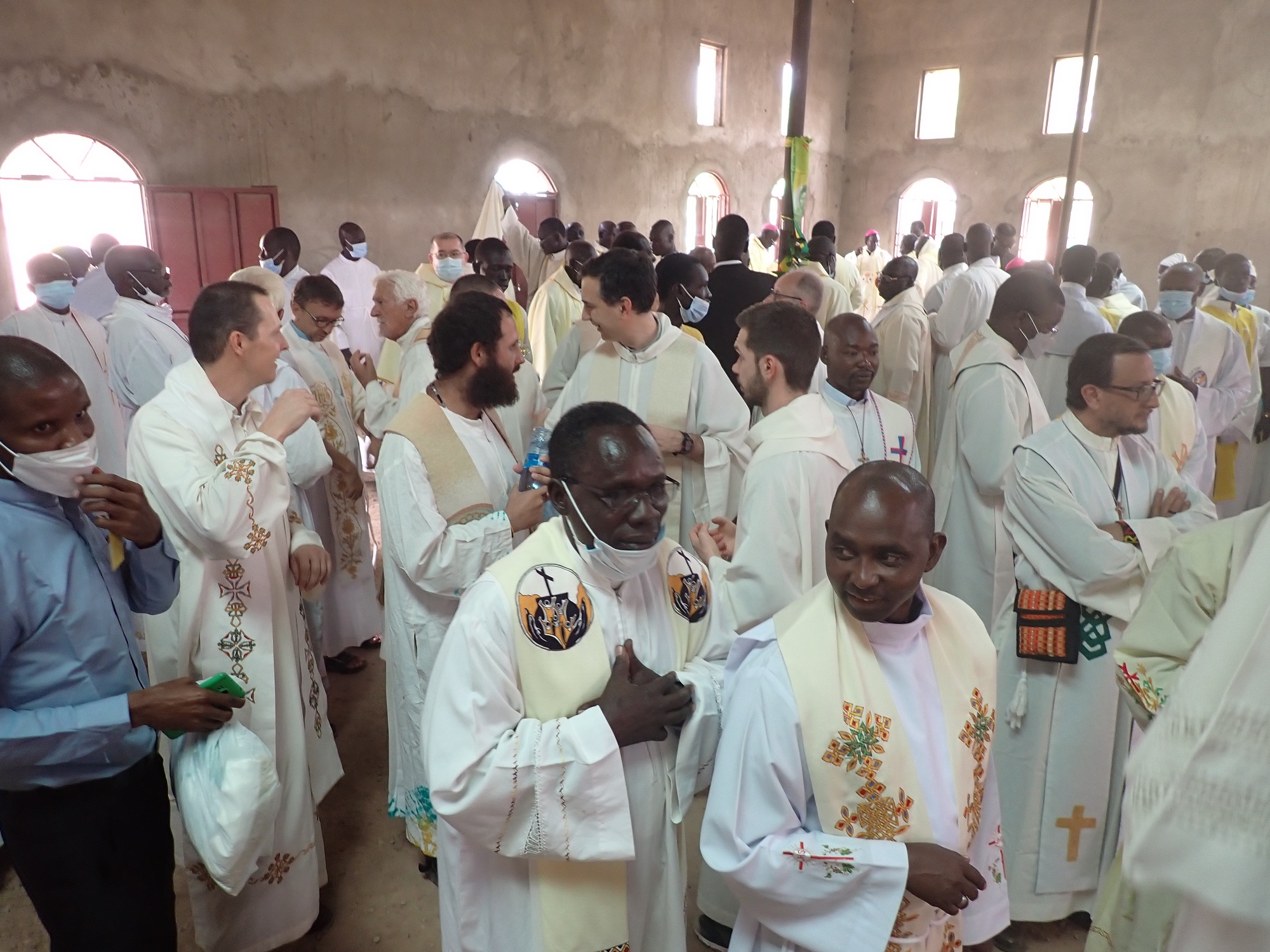 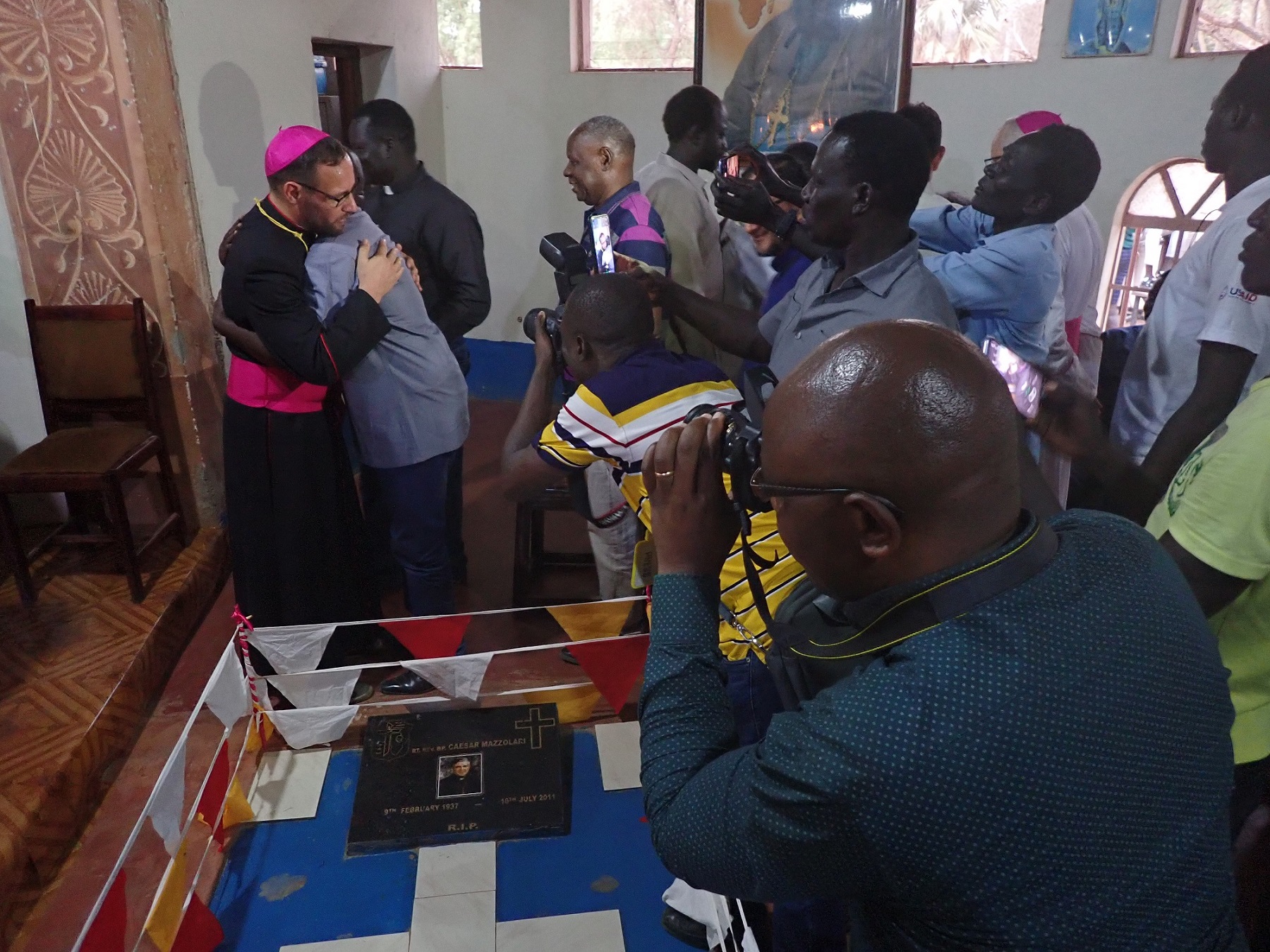 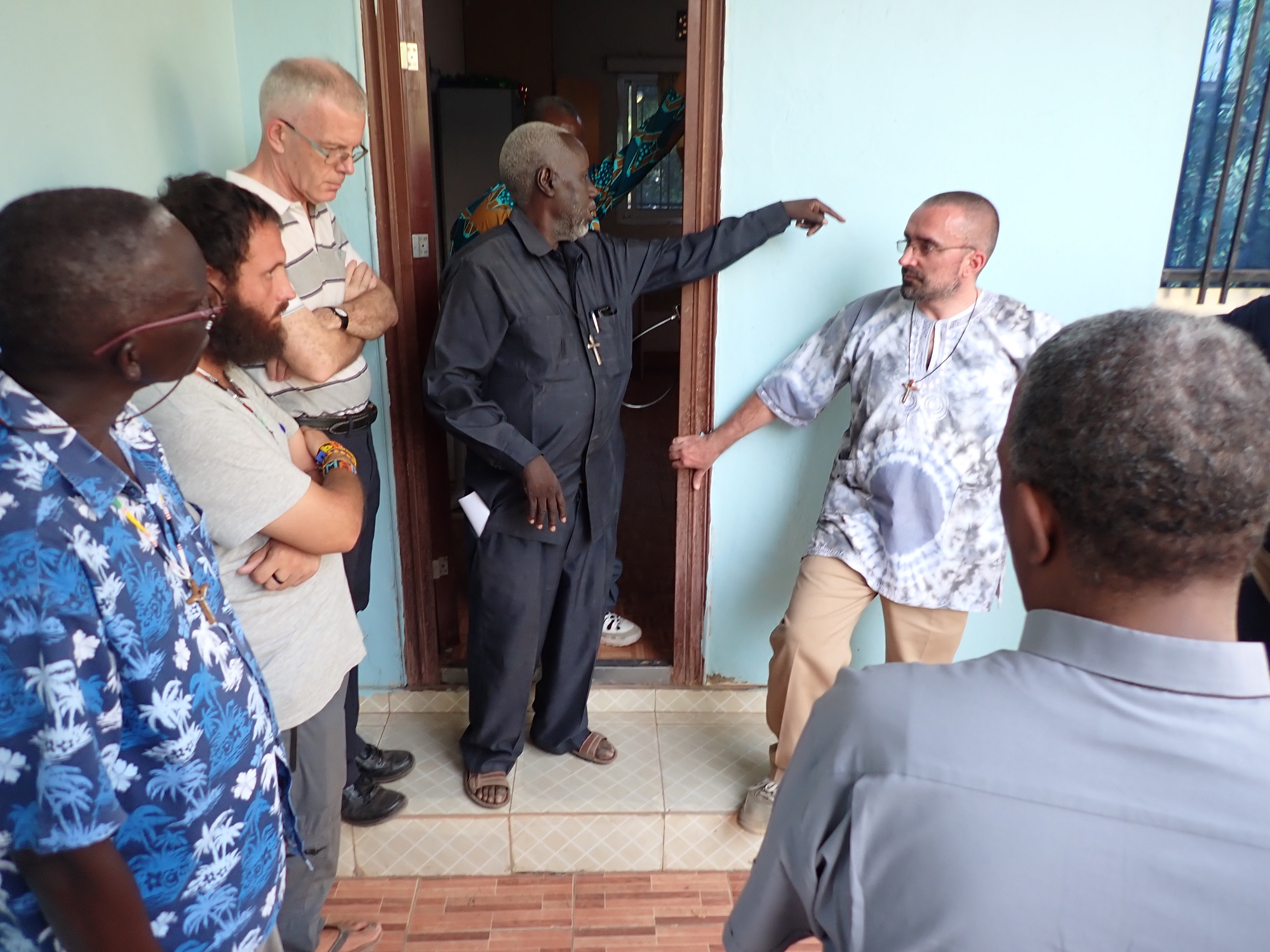 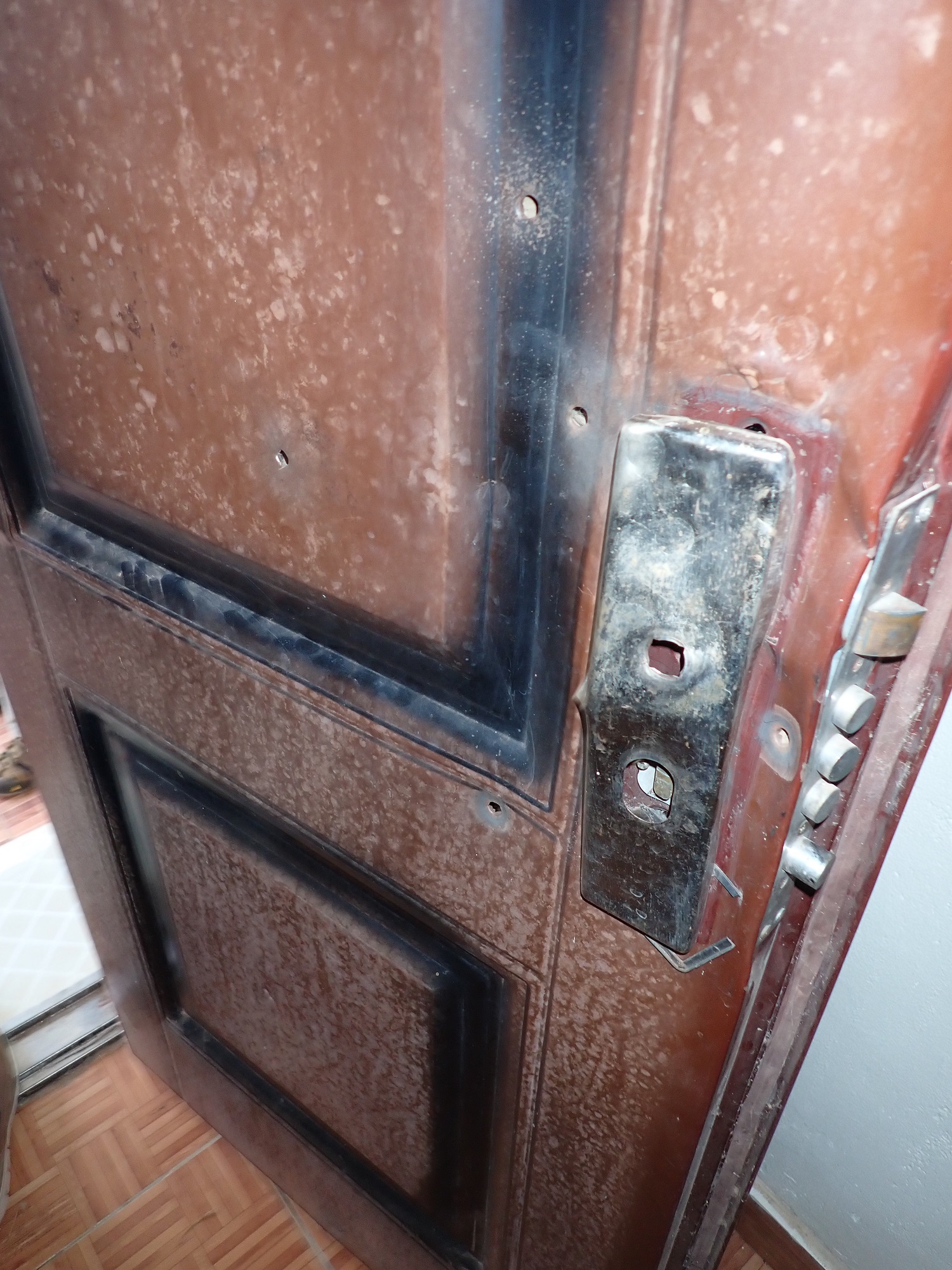 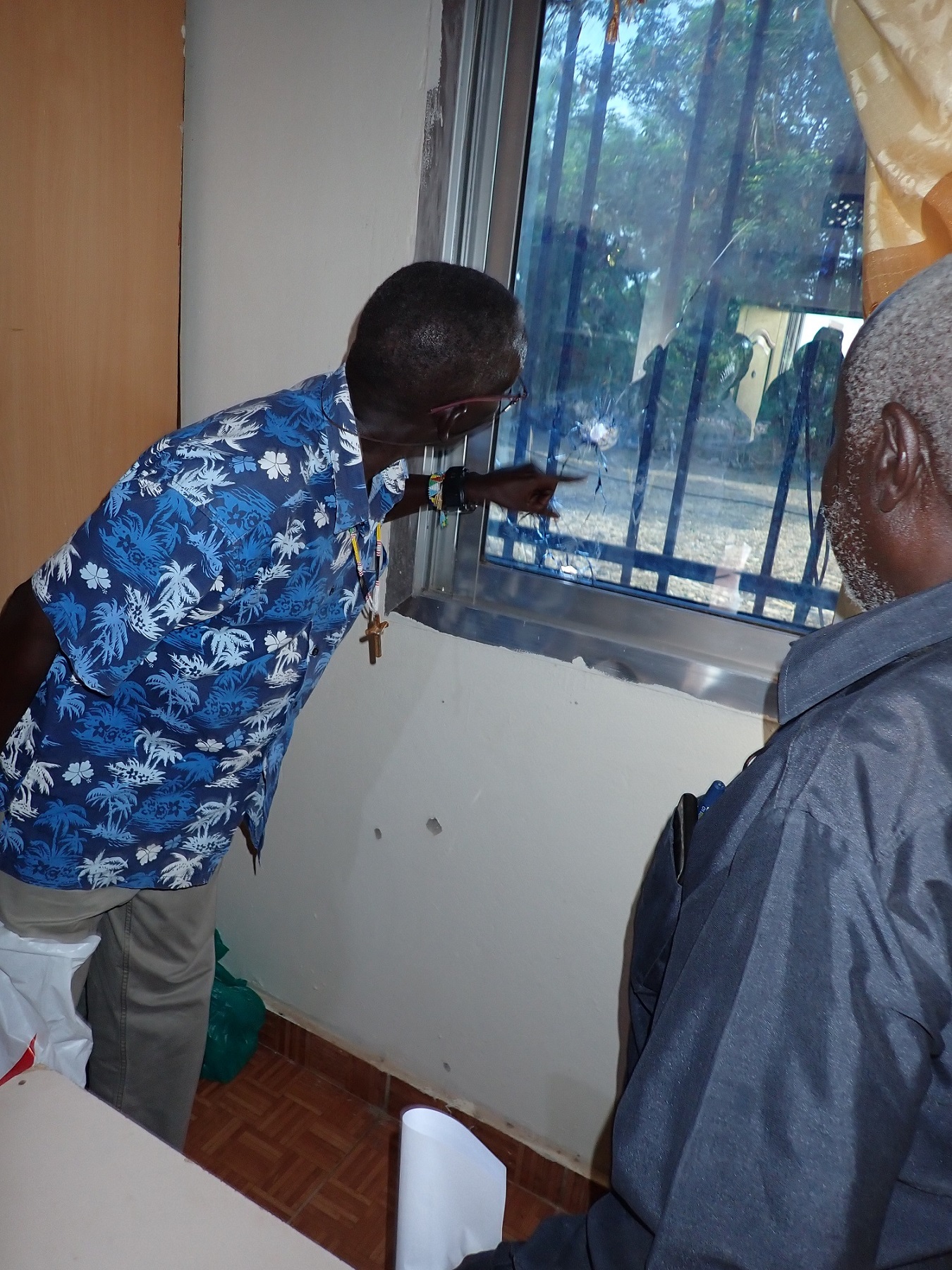 On March 25, 2022, on the Feast of Annunciation, Fr. Christian was ordained bishop in Rumbek by the Cardinal Emeritus of Khartoum, Zubeir Wako. The rite began with the invocation of the Holy Spirit. A precious book with the four Gospels was placed on Christian’s head. After being anointed with oil, he received a Mitra, a ring and a staff. The staff is hand-made from a tree of his home region in Italy, the diocese of Padova. It was a joyful feast with more than 10,000 visitors of the parishes.

The authorities were represented by the governor of Lakes State and a minister from the national government. President Salva Kiir sent his greetings. Several guests from abroad attended the consecration, such as the parents and the sister of Christian, the General Superior of the Comboni Missionaries, Tesfaye Tadesse, and the Italian Provincial Fabio Baldan.

The day before his ordination, on the memorial day of St. Oscar Romero, Fr. Christian took the bishop’s oath. He placed this oath, i.e. to be faithful to the Gospel and to serve the people of God as shepherd with all his strength, under the legacy of St. Oscar Romero who was murdered for his solidarity with the poor and those deprived of their rights. Christian himself was shot after his appointment and will carry the scars on his legs all his life. On the day of his consecration, he returned for the first time to the room where the attack happened last year in April. His parents and a group of Comboni Missionaries accompanied him.

We prayed arm in arm together in the room where the bullet holes are still seen, about 15 holes in the walls and the door. When the father of Christian attempted to say a prayer, his words became tears and we all had tears in our eyes. It was a blessed moment, being aware that God had protected Christian to make the Gospel a light of hope in this country burdened through violence. We also remembered the words of Jesus that a true shepherd does not abandon his sheep in times of trouble, but will offer his life for them. Christian confessed to this when he shared in the mass on Sunday (March 27) that he never had doubts to return. The Catholics applauded spontaneously.

The Gospel reading of this mass (the 4th Sunday of Lent) was the parable of the merciful Father with his two sons in Luke 15. Christian celebrated his first mass as a priest 18 years ago with the same Gospel. It is a parable for South Sudan where our heavenly Father yearns to unite tribes into one family of faith, where people have sinned like the younger son and where people don’t want to forgive like the elder son. Christian wants to gather people and reconcile them through Christ to God. As a shepherd of the diocese his words and actions shall point to the self-giving of the Good Shepherd Jesus Christ and the love of the merciful heavenly Father. His motto as a bishop to bring the unity of faith is chosen from Galatians 3:28 “All of you are one in Christ Jesus.”

Christian came to Sudan in 2005, the year of the Comprehensive Peace Agreement (CPA) between the southern regions and the government in Khartoum. It paved the way for independence in 2011. For 10 years, he lived among the Nuer in Holy Trinity Parish, Fangak County, Malakal Diocese. I was sent there in 2012 and worked together with Christian for almost 5 years. We spent a blessed and joyful time together which developed into friendship and deep trust. Christian lives his faith and his vocation as a missionary with sincere earnestness and love for humans.

He draws his strength from his relationship with the Lord Jesus and focuses in his pastoral work to make people trust in Jesus and follow Him wholeheartedly. His earnestness prevents him from frittering away his time, instead he has been working diligently as a parish priest, as a formator in the Comboni province and in his position as general vicar of the Diocese of Malakal. At the same time, he has a healthy humor which pays attention to the unintentional comedy of human behavior. We laughed a lot in Old Fangak. Christian’s humor does not show at the expense of others, but he makes people feel relaxed to laugh together.

South Sudan has seven dioceses. Christian is the only foreign bishop and currently the second Comboni bishop after Matthew Remijo in Wau. His appointment comes at a time where the split in society and in politics is deepening again. Even Catholics and their bishops are affected. The visit of the pope to Juba in July 2022 gives us some hope. But the situation remains fragile. While we were celebrating in Rumbek, soldiers of the president were gathering near the airport and the house of the opposition leader who made an appeal to the international community. There is a risk that the country slides back to open civil war.

Unfortunately, it is difficult for the Church in South Sudan to have a unified response to a path of reconciliation for this multi-ethnic society. Therefore, I place my hope in the new bishop of Rumbek, who was a shepherd for the Nuer in previous years and now has become a shepherd for the Dinka, because he defends impartially the dignity, freedom and well-being of each human being. Our founder Daniel Comboni was not the first missionary in Sudan, but he was the first who returned. All other missionaries which survived their visit did not. May the return of Christian Carlassare be a sign that God will bring blessings and healing for the peoples of South Sudan.