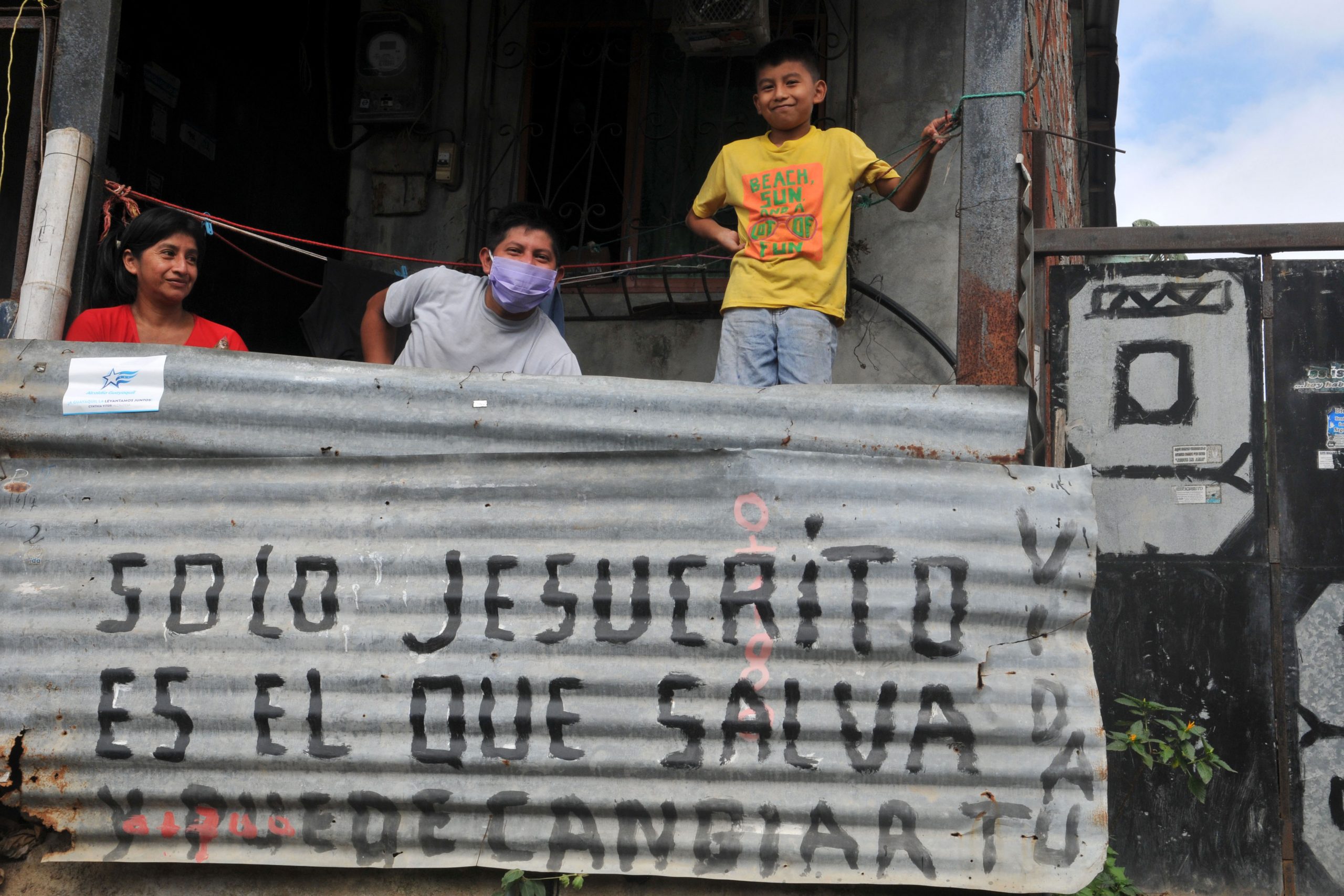 Residents of the impoverished neighborhood of Cooperativa Bastion Popular, in Guayaquil, Ecuador, are pictured during the COVID-19 novel coronavirus pandemic, on May 9, 2020. The graffiti reads, “Jesus alone is our salvation.” 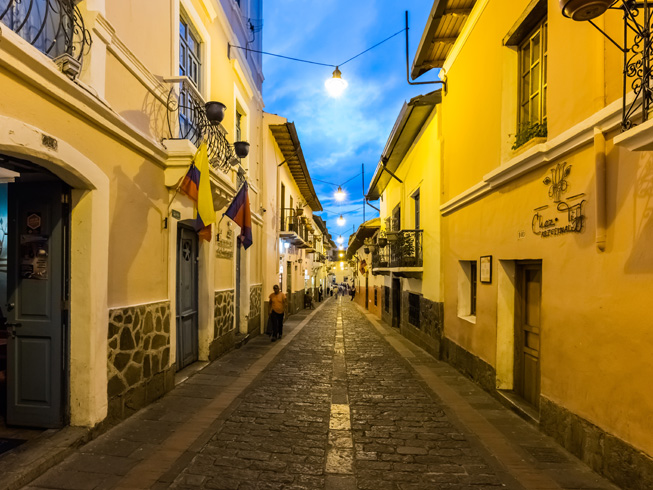 Guayaquil’s success in combating COVID-19 has been a gift to the capital of Quito, where the outbreak visited a bit later. Guayaquil has been able to share resources and medical staff with Quito and small towns throughout Ecuador. 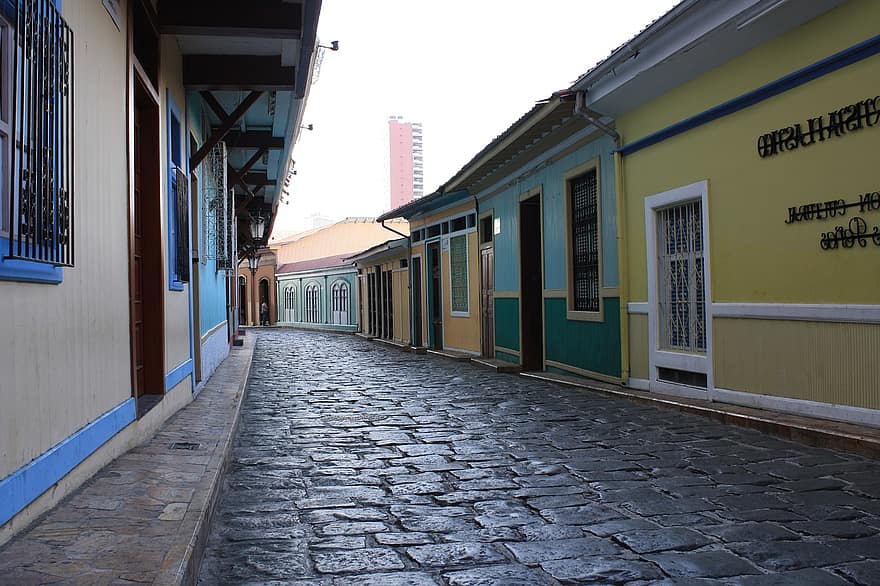 The wealthier streets of Guyaquil are still quiet, but once again clean.

In March and April, Ecuador was a nightmare. Among the hardest hit by the pandemic in the region, it struggled to keep up with the health emergency. For months, it failed.

Especially hard hit was the nation’s economic hub, the Pacific port Guayaquil. Comboni Missionary Fr. Jose Barranco describes the impact there as “catastrophic.” Victims of the virus died at home by the hundreds — and that was not the worst of it. Makeshift morgues soon filled to capacity and then, as journalist Blanca Moncada reports, things got worse.

“There are bodies stacked in freezers, corpses lining the corridors, even stacked outside the hospital,” she reported in April. “We are living in hell.”

Social media was flooded with images of the untended dead in the streets. Despite assurances from President Lenin Moreno that the situation was not as dire as those images reflected, more than 1,000 bodies were collected from public streets and private homes in one two-week period.

A military checkpoint stopped one vehicle leaving the city with a corpse propped up and masked in the back seat, disguised as a sleeping passenger. There were our other people in the car. Ecuador’s health system was immediately overwhelmed by coronavirus cases. Medical staff worked double shifts, but the contagion was so swift and widespread that there was no chance to get ahead of it. All eyes fell on Guayaquil as a bellwether of the virus’s impact on South America.

Fanning the Flames
At first, the spread of the infection was blamed on a slow government response and an unwillingness of the people to quarantine or take precautions — a situation that any country might face. But here, there were more challenges.

Fr. Jose explains that quarantine, while inconvenient for wealthier countries, is all but impossible here. “The houses are only one room,” he says. “Three, four, or even five people live together, and there is little food.”

Food scarcity often means daily trips away from home in search of something to eat. At least one member of the family must leave the house and when they return, they are just inches away from the rest of the family. “What are they supposed to do?” asks Fr. Jose.

Faith and Hope
Fr. Jose shared how the Church has responded to the crisis. A hospital run by the Archdiocese of Guayaquil was not equipped to help those with coronavirus, but it expanded its services to other patients and provided a telephone service to dispense medical advice. This took some of the pressure off the hospitals and staff struggling to manage the COVID crisis.

The Catholic parishes in the area teamed up with the government on a program to feed the hungry. The churches are accessible to more people than the government buildings, so they became centers for collecting and dispersing donations and government-provided rations.

Along with his other ministries, Fr. Jose is the director of National Catholic Radio in Ecuador’s capital, Quito. Radio-based liturgies and prayer services help to keep the people connected to the Church and one another, sharing “faith and hope” with listeners.

Ecuador is no stranger to contagion. Yellow fever and malaria are constant concerns in its tropical climate, but in the early days of the coronavirus outbreak, no one knew how bad it would become. Once officials understood the extent of the crisis, they took action.

A Dramatic Turnaround
The cooperation between government and private charitable groups made for a dramatic turnaround. Large gatherings were prohibited — an especially harsh burden in a culture that turns every baptism and wedding into a community celebration. Mask-wearing was strictly enforced with violators subject to a $60 fine and public servants, such as bus drivers, liable for penalties up to $200.

Along with food distribution, mobile medical clinics helped keep infected patients from traveling for diagnosis and care. A researcher at the Universidad San Francisco in Quito, Bernardo Gutiérrez, told the Associated Press, “the merits of Guayaquil specifically lie in their efforts to organize and coordinate efforts between the local government and different civilian actors.”

Back on Their Feet
The intervention worked. While the virus stubbornly persists in Guayaquil, cases have plummeted to such an extent that the city is sharing its supplies and medical staff with Quito and more rural areas. Critical patients can now safely be sent to hospitals in Guayaquil, which now have the capacity to treat them. The public health crisis of bodies in the street (which officials continue to suggest were overreported) has been eliminated.

NBC News reported a story emblematic of the city’s rebound:

On July 25, [mayor] Viteri marked Guayaquil’s foundation by Spanish colonizers in the 16th century with an emotional speech on Carmen hill, which overlooks the city.

“We were simply left to our fate” at the pandemic’s peak, she said. But, the mayor said, Guayaquil residents got back on their feet.