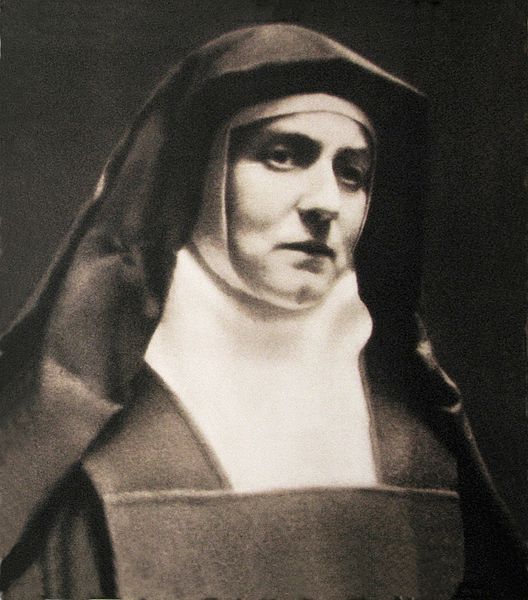 St. Teresa Benedicta of the Cross

St. Teresa Benedicta of the Cross

Very often it is a holiness found in our next-door neighbors, those who, living in our midst, reflect God’s presence… We should consider the fact that as St. Teresa Benedicta of the Cross suggests, real history is made by so many of them. As she writes: ‘The greatest figures of prophecy and sanctity step forth out of the darkest night. But for the most part, the formative stream of the mystical life remains invisible. Certainly the most decisive turning points in world history are substantially co-determined by souls whom no history book ever mentions.’ #8 Rejoice and Be Glad

St. Teresa Benedicta of the Cross (October 12, 1891 – August 9, 1942) was born Edith Stein to a devout Jewish family in Poland. By age 14 she abandoned her faith. During her studies she focused on philosophy and phenomenology. However while reading the autobiography of St. Teresa of Ávila, Edith became so captivated it prompted a conversion of heart and she was baptised in 1922 eventually become a Discalced Carmelite nun. She was a lecturer and prolific writer. During her career she taught in Munich and the Netherlands. That all came to an end in 1942, when the Nazi’s arrested all Dutch Jews who had become Christians. Edith and her sister Rosa died in an Auschwitz gas chamber on August 9, 1942.

She is canonized as a martyr and saint of the Catholic Church.