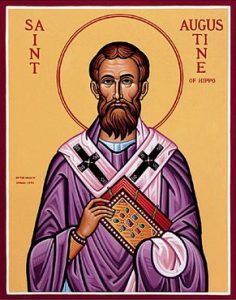 #49 … They fail to realize that “not everyone can do everything,” and that in this life human weaknesses are not healed completely and once for all by grace. In every case, as Saint Augustine taught, God commands you to do what you can and to ask for what you cannot, and indeed to pray to him humbly: “Grant what you command, and command what you will.”

#142 Sharing the word and celebrating the Eucharist together fosters fraternity and makes us a holy and missionary community. It also gives rise to authentic and shared mystical experiences. Such was the case with Saints Benedict and Scholastica. We can also think of the sublime spiritual experiences shared by Saint Augustine and his mother, Saint Monica. “As they day now approached on which she was to depart this life, a day known to you but to us, it  came about, as I believe by your secret arrangement, that she and I stood alone leaning in a window that looked onto a garden… We opened wide our hearts to drink in the streams of your fountain, the source of life that is in you… And as we spoke of that wisdom and strained after it, we touched it in some measure by the impetus of our hearts… eternal life might be like that one moment of knowledge which we now sighed after.”

If not for St. Monica, we might not have the great St. Augustine.

The oldest of three children born to St. Monica and the pagan Patricius (who converted before his death), Augustine spent his youth living wildly – indulging in one vice after another. During his school years he joined a religion that viewed the world as only light and darkness, and after death a person was removed from the world of matter and returned to a world of light.

Augustine shared these views with St. Monica how was having none of it. She threw him out of her house. Despite their challenges, Monica never stopped praying for her son.

Augustine traveled to Milan where he met up with St. Ambrose. It wouldn’t be long before St. Monica also showed up, praying for her son’s conversion. After 17-years, though, Augustine found his way back to the church. He was baptized in 386.

For the rest of his life, Augustine dedicated himself to writing and serving the Catholic Church. He helped formulate the doctrine of original sin, and his writings are indispensable to the Church today. His most important works are The City of God, On Christian Doctrine, and Confessions.