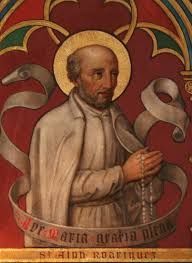 Growth in holiness is a journey in community, side by side with others. We see this in some holy communities. From time to time, the Church has canonized entire communities that lived the Gospel heroically or offered to God the lives of all their members. We can think, for example, of … St. Alonso Rodriguez and companions.

Born in Spain in 1532, St. Alonso’s life was one tragedy after another. His wife and three children died one after the other. Alonso was a cloth merchant, but not successfully. After losing his family, Alonso turned his thoughts to religious life. A lack of education prevented him from ever receiving a degree or becoming a priest, however his years spent in prayer paid off. A provincial of the Jesuit Fathers in Valencia admitted Alonso as a lay-brother.

Alonso was sent to the college of Montesion on the island of Majorca to work as a door keeper and porter. While other Jesuits traveled the world evangelizing, Alonso ran errands for 46 years. However, students began seeking out Alonso because of his unusual wisdom and faith.

Alonso became friends with one notable saint, Peter Claver, and advised him to volunteer for the South American missions. Following this advice, St. Peter Claver eventually catechized, baptized and spoke out for the rights of 300,000 slaves in South America.

Alonso died in 1617. His superiors examined the writings he left behind describing his spiritual life. What they found was the life of a saint and mystic. His approach was simple: Christ was appearing in every person who appeared at the door; the task was to encounter God in any task.

St. Alonso pray for us!