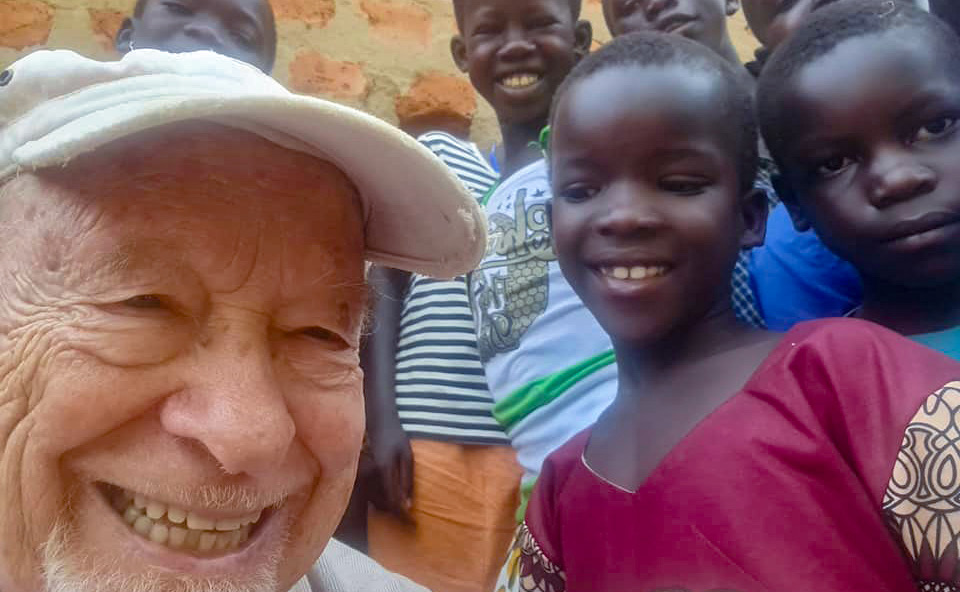 Fr. Alberto Anichini is energized by his mission in Uganda. 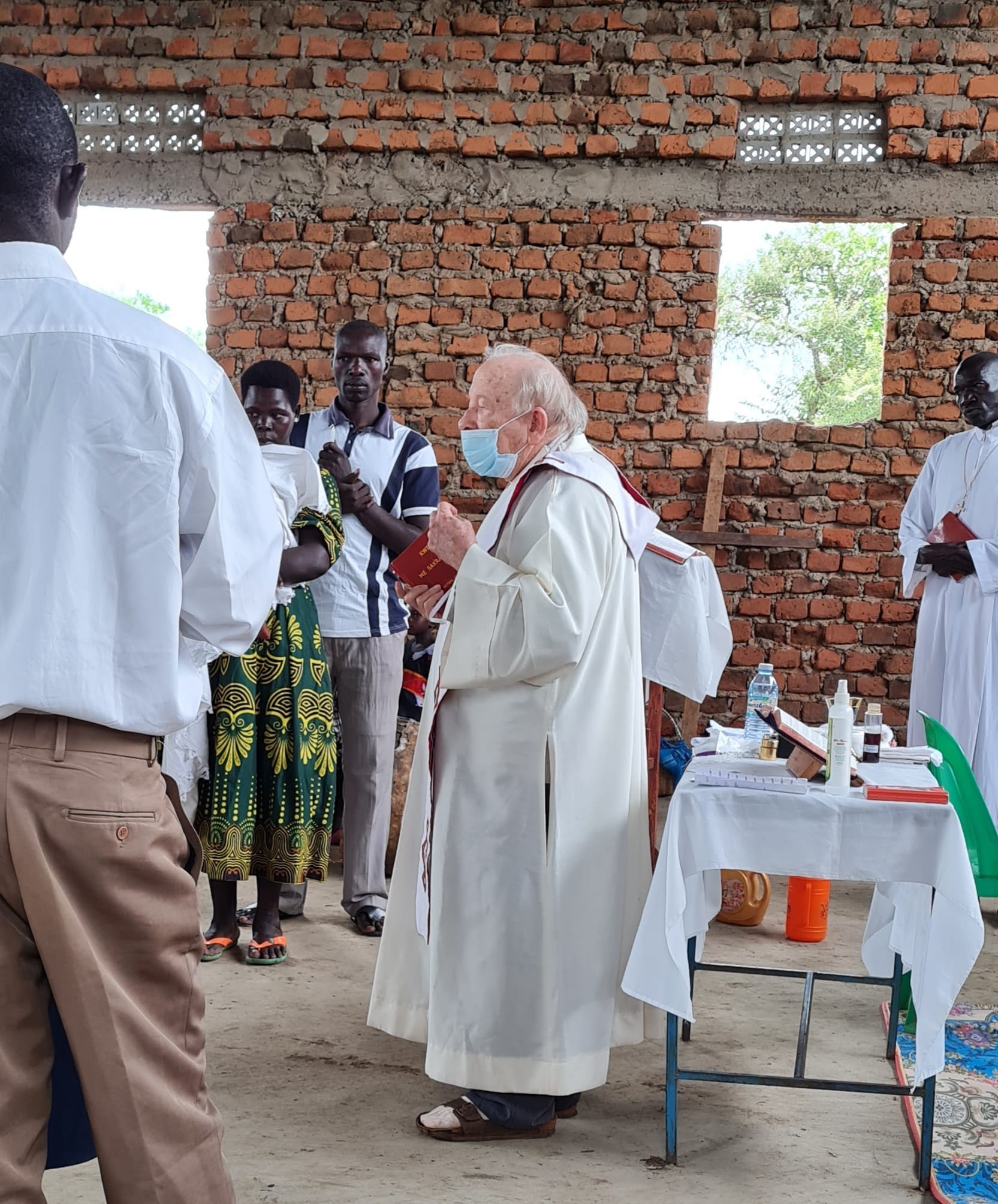 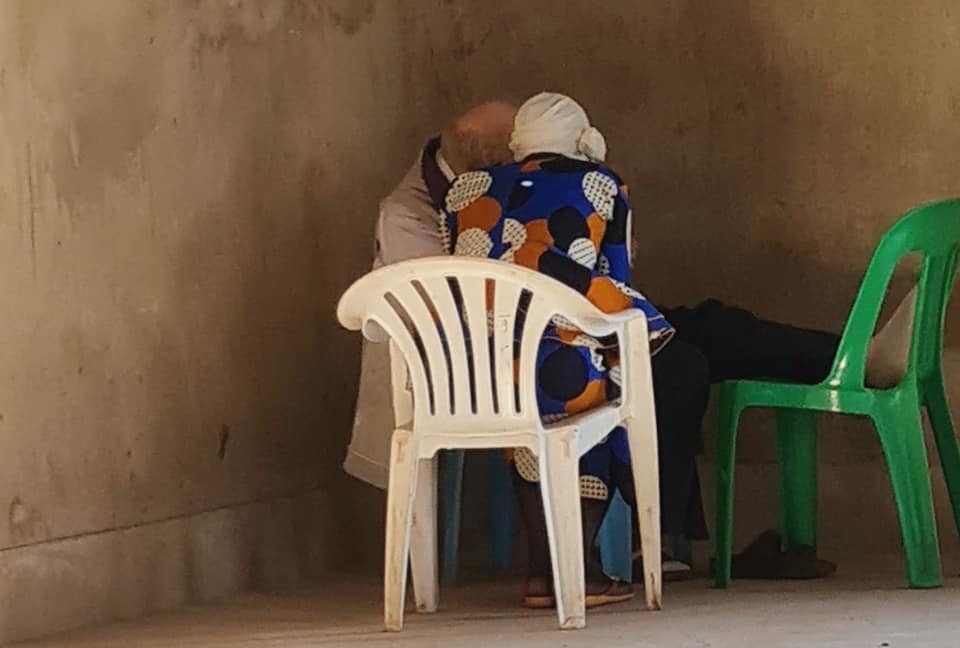 Fr. Alberto is often seen with his injured leg elevated, but this does not slow him down. Here he is turning a quiet corner into a confessional.

“It’s nothing special, simply priestly ministry. But that’s what the faithful want.”

Eighty-three-year-old Comboni Fr. Alberto Anichini is energized by his ministry in northern Uganda

Fr. Alberto Anichini’s work in Uganda seemed to have come to a conclusion. While he recovered in Italy from years of medical complications due to a broken ankle, the 80-year-old Comboni longed to return to his mission field at least long enough to say a proper farewell to his people.

“But the local and provincial superiors told me that they would never authorize a ‘tourist’ tour of Uganda,” he says. “They told me, ‘If you go, you will remain there!’ They thought they would scare me. Instead, I jumped at the opportunity. I said YES!”

Fr. Alberto is humble about his work here. “It’s nothing special, simply priestly ministry,” he says, “but that’s what the faithful want.”

The more than 60 oupost chapels in the parish of Alenga in northern Uganda start filling up early in the morning. “The people are very religious, especially after the long lockdown,” he said in April 2021, as restrictions began to ease. “They fill up the churches and chapels so much that after a few years we have to enlarge them or build bigger ones,” he says. “Their liturgies last a long time and are filled with joyful songs and dances.”

The coronavirus lockdowns were a blow to the people. The strict regulations meant that the priests could not travel to the outstations and even the main church was closed. The streaming Masses that had become routine in other parts of the world were simply not an option. “Most of our people have no access to the internet,” Fr. Alberto says.

As the rules eased this spring, the Masses resumed—with a few changes. “We divided the chapel areas into several smaller groups so there would be smaller groups of people and they could keep some distance between themselves. Even if we pray under a tree there is always soap and water at the entrance of the village and the priests and catechists wear masks and use hand sanitizer.

“And besides, there is always plenty of air in the open spaces where we have Mass!”

Fr. Alberto fell in love with the people here and they love him, too. But it has not always been a smooth relationship. “I would say that what always has struck me is their benevolence and tolerance toward me when perhaps I was kind of rude maybe unknowingly regarding their own etiquette in relational behavior,” he confesses.

For example, in this region it is common for women or girls to kneel when they are offering you an item or a service. If you are offered a drink in someone’s home, they will kneel in front of you to deliver it. They will do this for anyone, male or female, but men and boys do not follow the same behavior.

“When I protested with the women their answer was ‘That is simply how we show good manners.’ And they laugh when I object that the attitude creates the mentality of the inferiority of women,” he says.

Some other traditional practices, Fr. Alberto says, may seem outdated, but still have their value. Young men typically offer goods or money to their bride’s
family as part of the marriage arrangements. “It is a compensation for losing a valuable member of the clan,” he says, “and maybe serves as incentive for the spouses to ‘behave’.”

These arrangements may seem unusual, but Fr. Alberto says, “I think for the time being that it is a positive thing, especially when compared to how often marriages break up in our Western world, and how often women are mistreated or even killed.” The practice seems to ensure that wives are respected and valued.

This respect seems to permeate the culture here. Elders are honored and listened to and children are cherished. Sometimes it is a challenge for outsiders to get used to this standard of concern for others.

“For instance,” Fr. Alberto says, “they give you all their attention and time when you are their guest. I am not always able to reciprocate that; there are often too many things on my mind.”

And the generosity of the people permeates every aspect of life. “I have always marveled at the way they express genuine joy when they can offer you something, be it a chicken or some produce from their fields. The most joyous moment of the Eucharistic celebration is the offertorial procession,” Fr. Alberto says.

Mission work here has its challenges as well. “Perhaps spiritual growth is the most important challenge for our people. Our contact with them is too sporadic and too fleeting to touch them deeply. Though the most important theme of my preaching is the unconditional love of God for us, we rarely have time for a deep exchange and dialogue.”

“Until the Covid lockdown stopped it, at least the monthly gatherings of the charismatic movement gave a lot of people the occasion for a deeper encounter with God. I marvel at how even young people or children enjoyed silent prayer as well as the loud singing and clapping that go with such meetings.

“The people here are naturally spiritual and we should do more to foster this deep vein of their soul. I think that a well-prepared team of religious and laypeople could do wonders in this field, especially in helping to empower our people to make an impact in the social, political, and environmental fields.

“We have made a start,” he says, “but I must confess that I am a bit of an amateur in those fields. We need experts to help the people help themselves.”