Ministry is Service and Service is Forever 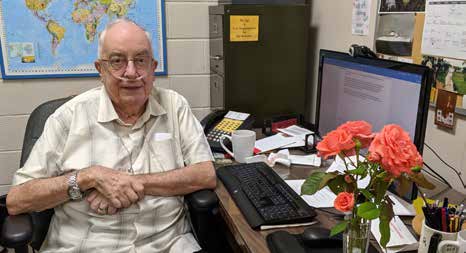 Fr. Joe Bragotti sits at his desk at the Cininnati Mission Center in 2020. 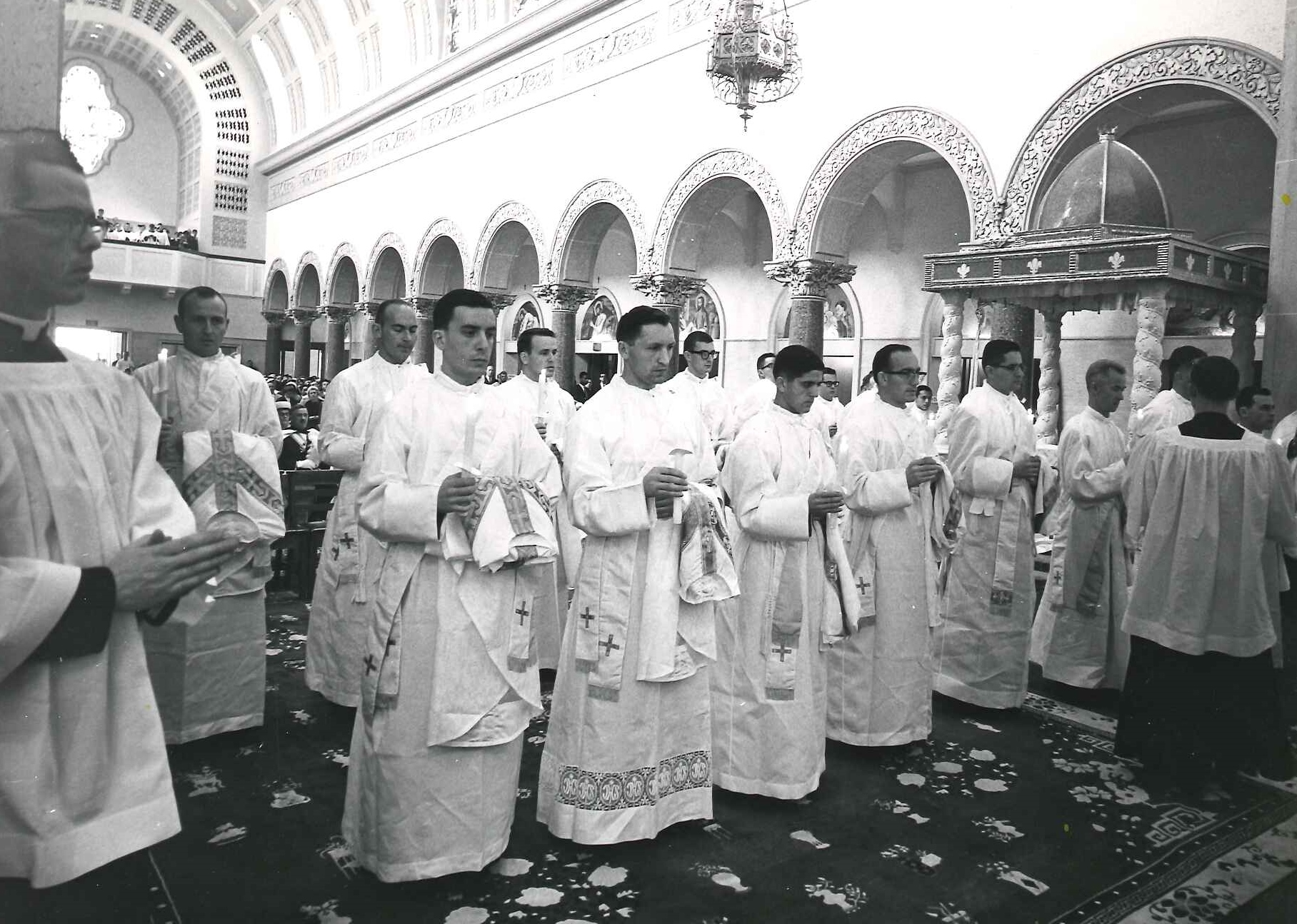 Fr. Joe Bragotti was ordained in San Diego in 1962. 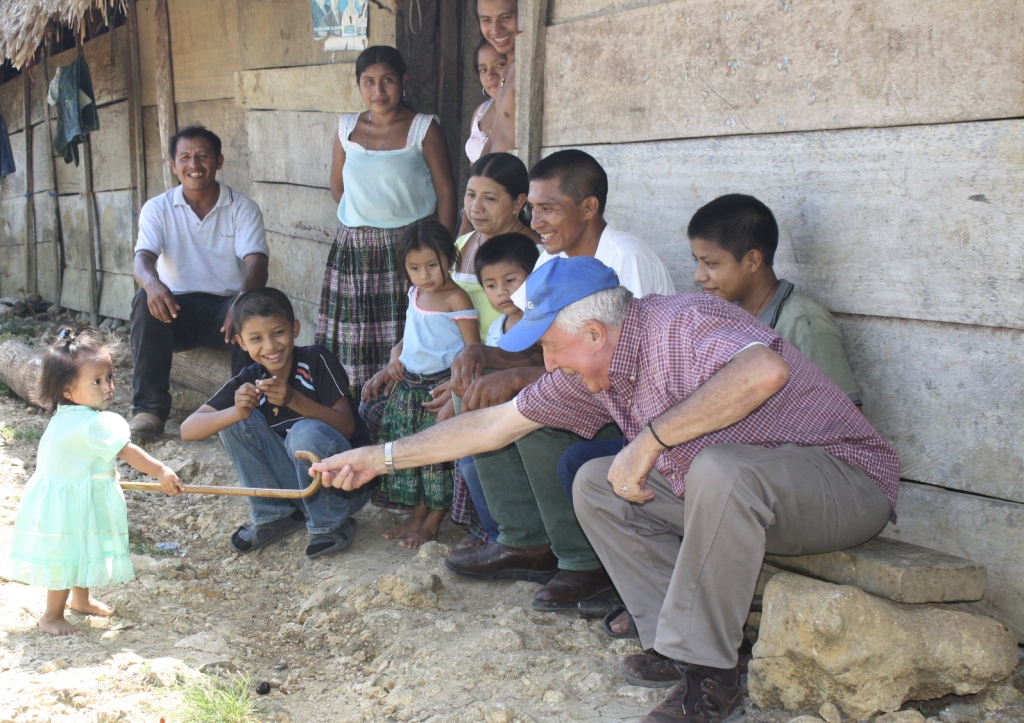 On St. Patrick’s Day, March 17, I celebrated my 58th anniversary of ordination into the missionary priesthood as a Comboni Missionary. I remember with fondness some of my earlier milestones. There was a lot going on in those days and I was in the thick of it all. Great memories. By comparison, my 58th will be very much on the quiet side and down to basics.

On the plus side, I am alive and I am writing my next entry for my blog, I still do a few things like translations, I keep an eye open for valuable mission items that will enhance our museum, I occasionally delve into our pictures’ archives, I do some writing. On the minus side, I am on oxygen to supplement what my lungs no longer can provide fully, my energy level is very low most of the time, both of my old artificial hips are giving up on me, and my hearing leaves a lot to be desired. This year, God willing, I will turn 83. Because of my current limitations, I haven’t driven a car in months (in fact, mine has been sold). But on the plus side again, I scoot with reckless abandon around our long corridors and spacious offices on a three-wheel, Ferrari-red little electric gizmo.

I am no longer able to go out for public ministry. Nor would I have the strength to do it. But from my vantage point, I look at what seems to be the current main mission topic: Ministeriality, they call it. It’s another word pushed on us by more verbose, Latin-speaking theologians and it is so defined (I Googled it): “noun. rare. The quality or fact of being ministerial; ministers collectively or as a class.” Is it something new? Have we just discovered hot water again?

Schooled for Service
Have I been in ministeriality for 58 years and did not know it? Or was I introduced to it at age 11, when growing up in post-WWII Milan, Italy, I idolized the young priest in the parish who made us pray, play, reflect and behave as “little apostles,” as he was saying. His spirit of service to us was contagious. Basically, that is why I became a priest. I wanted to minister like him.

I joined the seminary of Milan at age 14. I was being formed to a life of ministry as service to the people in a local church with a millennial tradition dating back to St. Ambrose and the Ambrosian Church, strengthened by St. Charles and the Counter-Reformation, the Christian Humanism of later centuries, the spearheading of social involvement and labor union by local archbishops in the early twentieth century, and the papacies of Milanese Pius XI and my local bishop of the 1950s, the future Pope Paul VI. I thought I had it all.

Service as Mission
Yet, by age 19 the leaven of my growth into ministry had yet to come. Over the years in the home parish and at the seminary we had constantly been exposed to missionaries and their service beyond all borders. Through a long set of circumstances, a great missionary figure and the exciting, rewarding lives of his followers had been taking over my thoughts, dreams and aspiration. Daniel Comboni, the apostle of Central Africa, his passionate love for Africa and the “thousand lives” that followed in his footsteps had conquered me. By October 1956 I was ready to leave behind all that I had known and taken for granted and joined the Comboni Missionary novitiate in Italy. By September 1957 I had been transplanted in the United States and the year VAT II started, 1962 saw my ordination into the missionary priesthood of the Comboni Missionaries. It meant that service, ministry, self-giving (in 2020 call it Ministeriality!) were mine by God’s merciful grace, to be practiced without borders, and for a lifetime.

In the spring of 2020, as I catch my breath (or what is left of it) I look back on my “ministeriality” of the past and in the here and now.

“It is not enough just to wish well; we must also do well.” 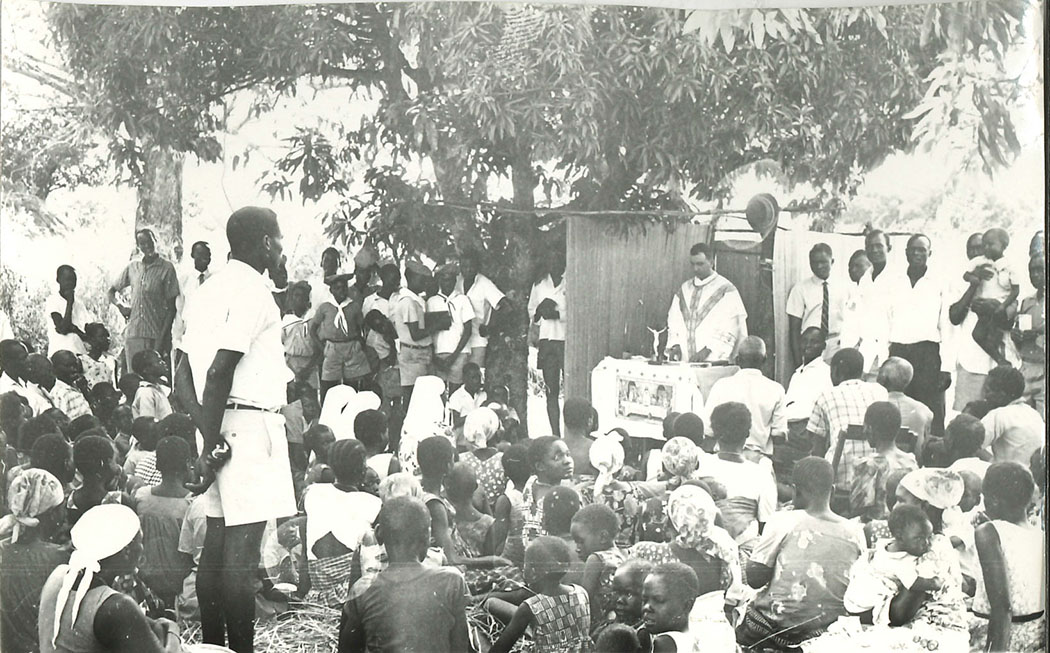 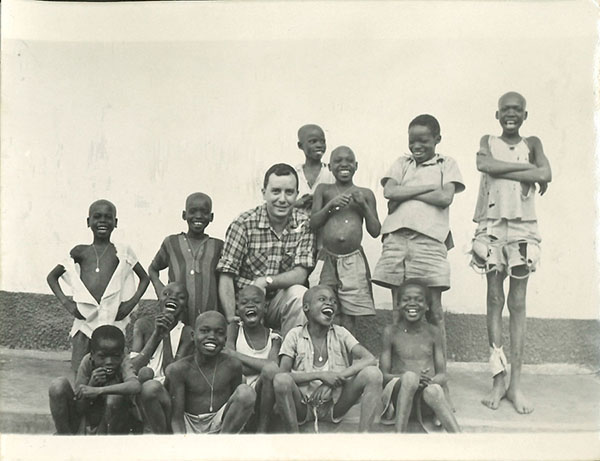 Father Joe Bragotti with the “artists” who helped make a Nativity scene from mud in dry Ugandan winter. 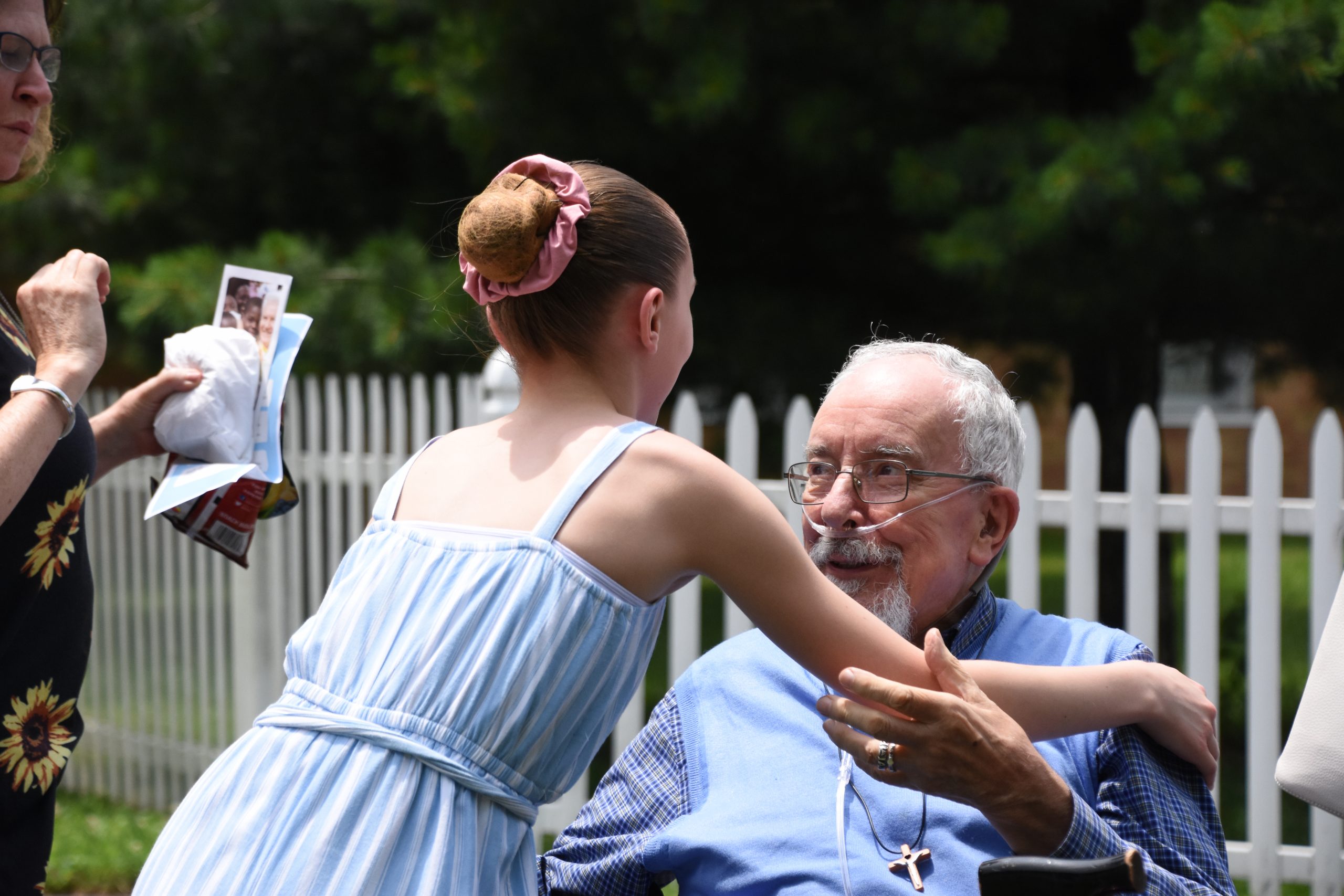 Father Joe Bragotti greets a friend at a recent event. He is learning to embrace his new ministry of allowing others to care for him.

Fr. Joesph Bragotti, mccj, is a Comboni Missionary priest and editor emeritus of this publication. He has traveled, worked, and served in more than thirty countries world-wide.

A Call vs. an Assignment
It pays to know the difference between the vocation to minister/serve and the jobs/tasks you do to fulfill that vocation. Jobs change and even end with time and places, service/ministry never changes or ends… it is who you are and meant to be.

So, jobs/tasks have come and gone. I started by recruiting for our seminaries, then plunged into pastoral work in East Africa. I spent years providing funds, projects and a public voice for mission among people back home. A large chunk of my life was given to the written word, reporting worldwide from the United States, Rome and around the globe, editing Christian leadership publications, ghost-writing for bishops, exposing to the world the joys and sorrows of the Church and its people in many a trouble spot. At age 70 I gambled on stepping out of my comfort zone and ended up in San Luis Petén, Guatemala’s remote Amazon-like frontier, and there I found the joy of being embraced by a living local Church drawing life from a committed laity. What a gift it was.

Living the Call
Assignments filled the years, but assignments do not define a person. After years of growing into a life of service and 58 years as a Comboni Missionary priest, what do I see as my defining lines of service?

My Ministry Today
So, Fr. Joe, are you retired? Am I retired? Isn’t this the buzzword among priests today? Well, yes and no. I retired from the many things I have done so far. But I am still a Comboni Missionary priest and this is not something you retire from. This is who I am. Vocation to service cannot ever be dumped, but rather recycled.

These have been and still are the three basic pillars of my Comboni Missionary priesthood. Was it always easy? No! Was it possible? Of course, with God’s help and a propensity to take risks and to never give up. Was it worth it? Yes!

Do I minister today? Yes, I do. Being a survivor is God’s reward for those who risk it all: a story with lots of bumps, but with no regrets. I have a hopeful story to tell. A good friend reminded me on what could have been a dark day of physical limitations. “Joseph,” she said, “do not forget that your being here with us is giving the opportunity to friends, confreres, visitors, and casual acquaintances to be kind, to help, to assist, to do what priests are called to do for others by their God-given call. To some, your need of help may be a nuisance. To the overwhelming majority of your neighbors you offer a daily opportunity to do good deeds.”

I am so blessed.

And, so be it. It is humbling and it is also life-giving, to be given the chance to empower others to do good and to serve. May the Lord give me the strength to do that.