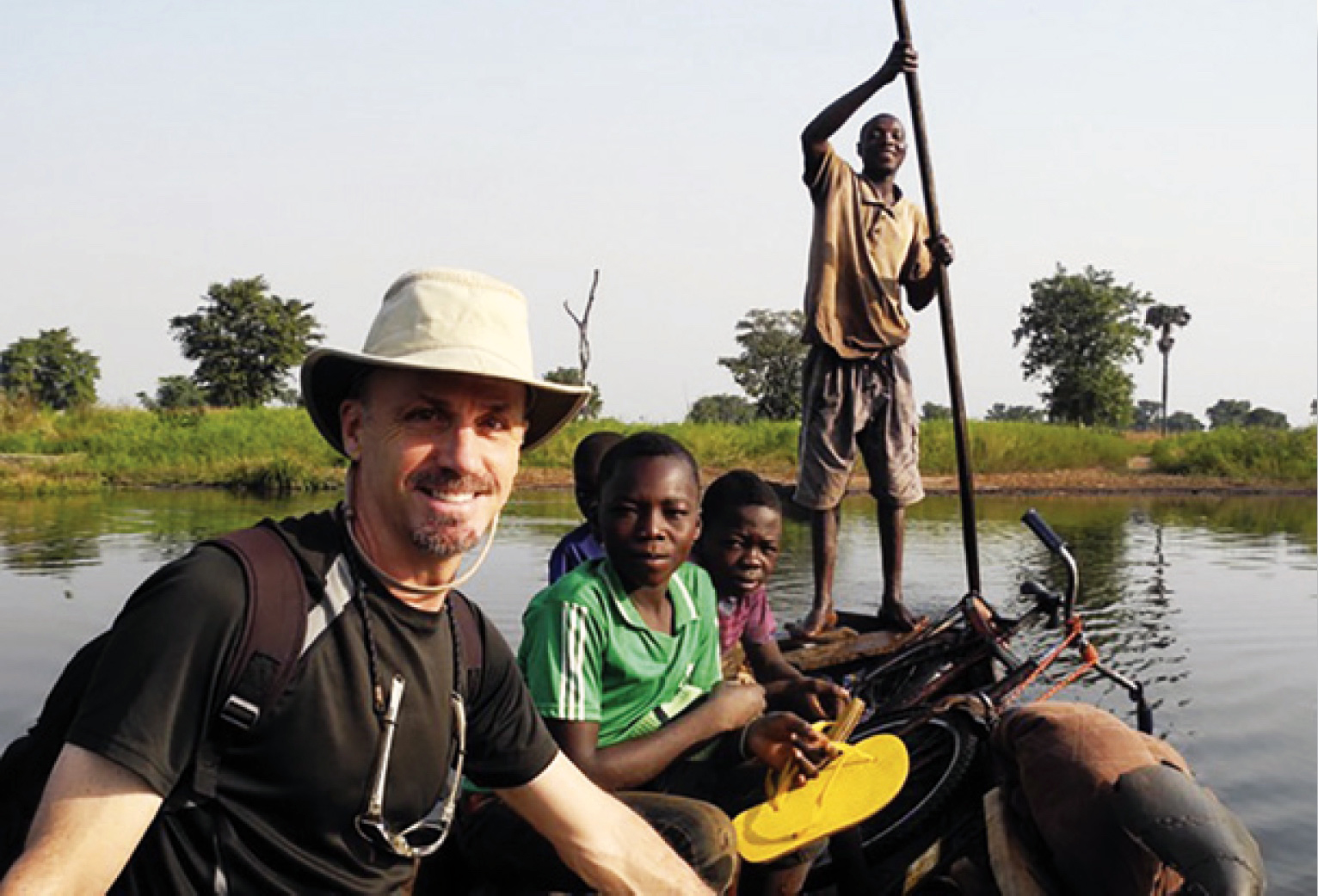 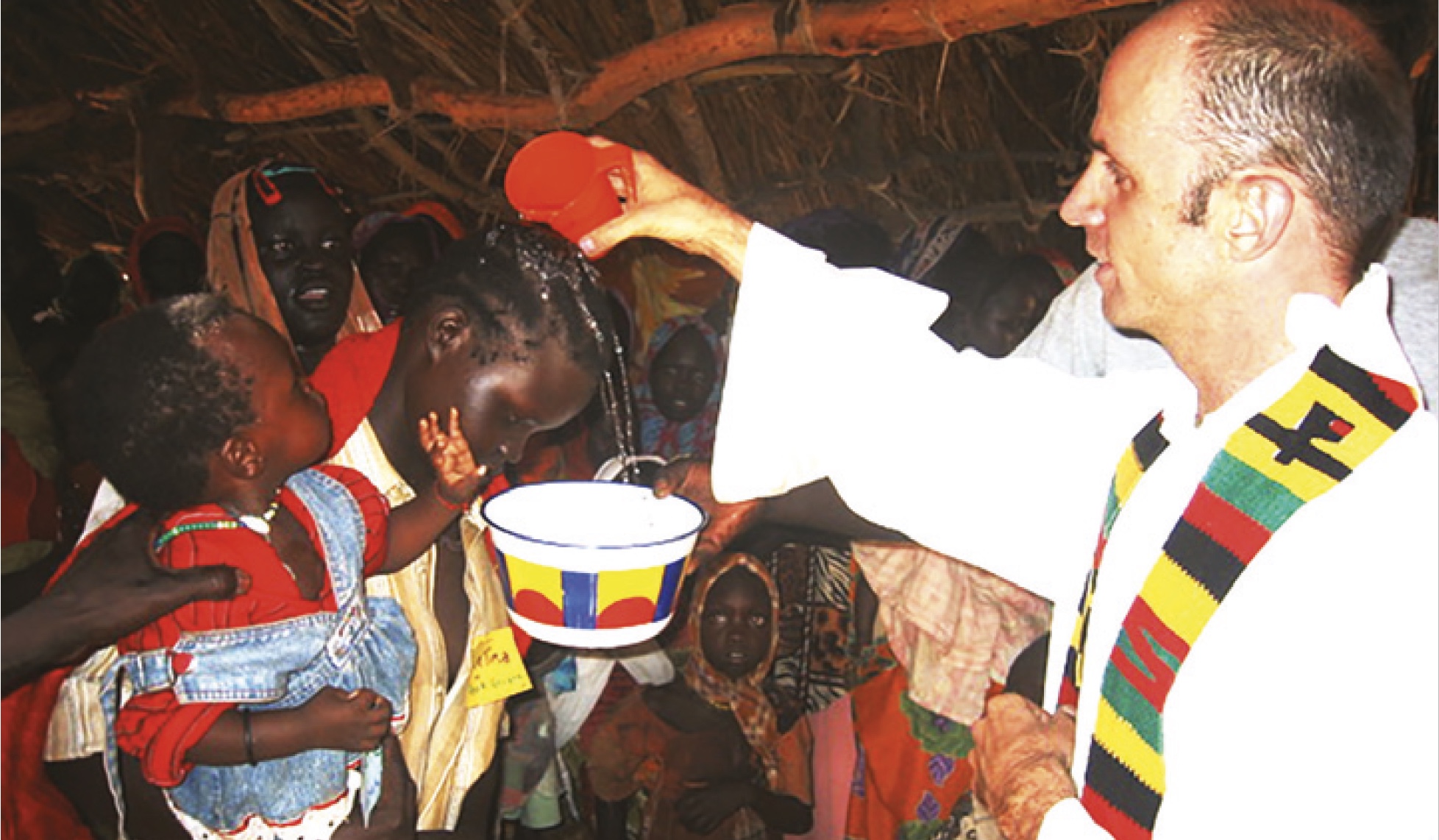 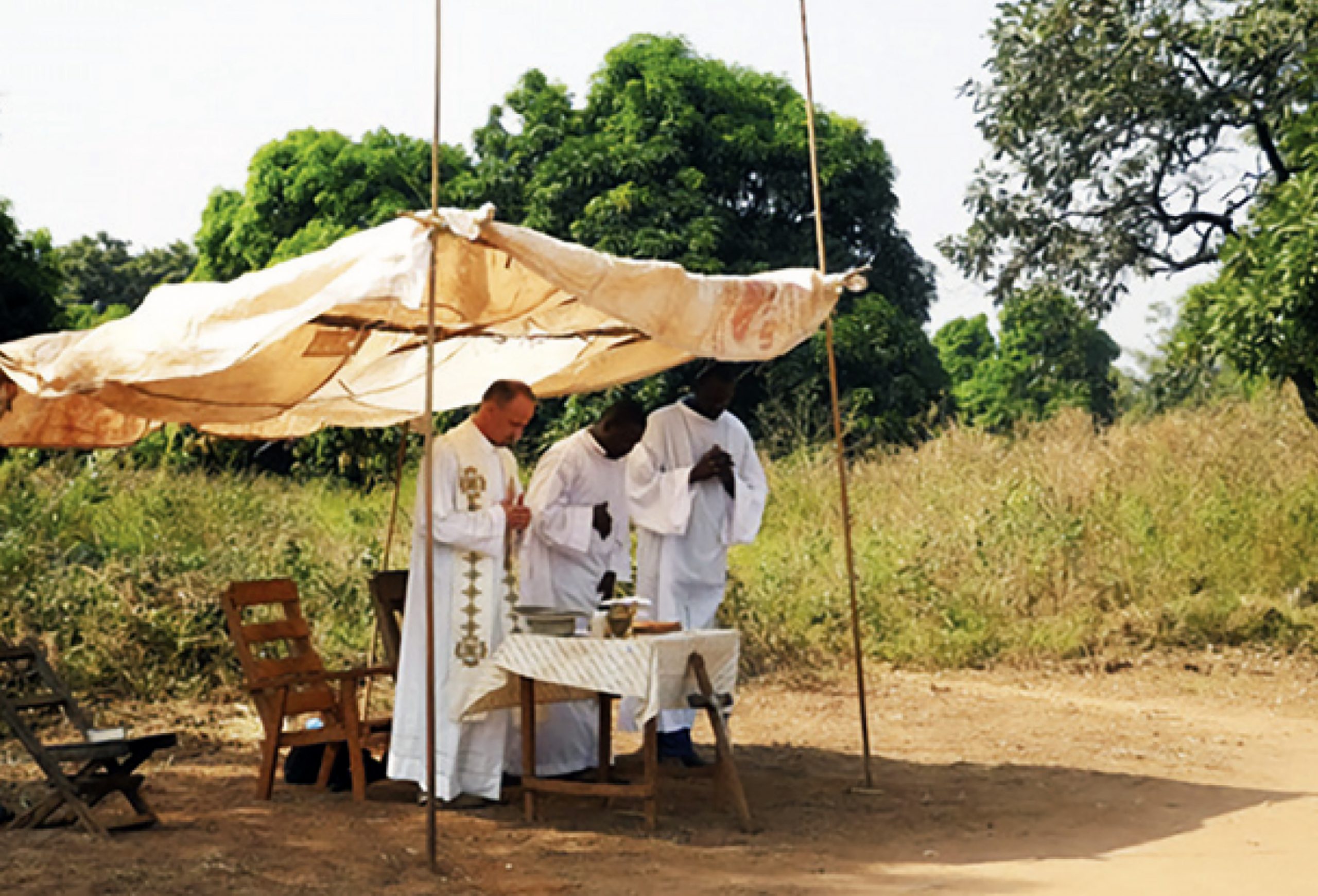 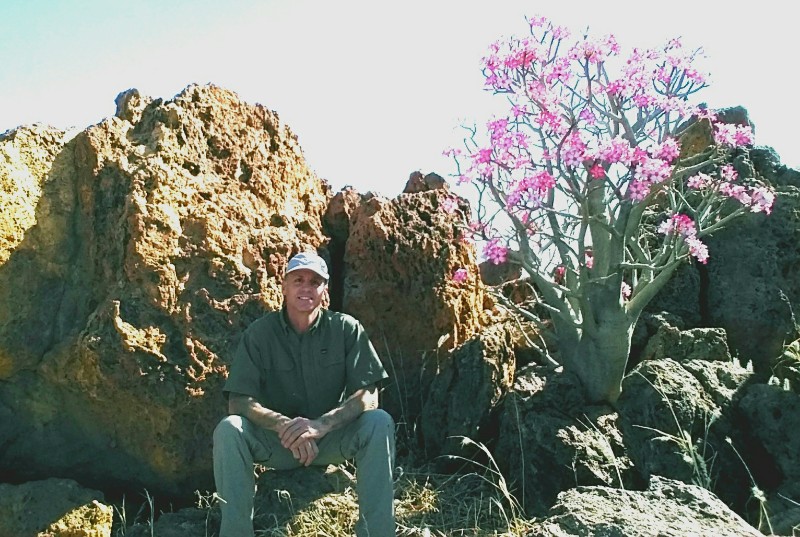 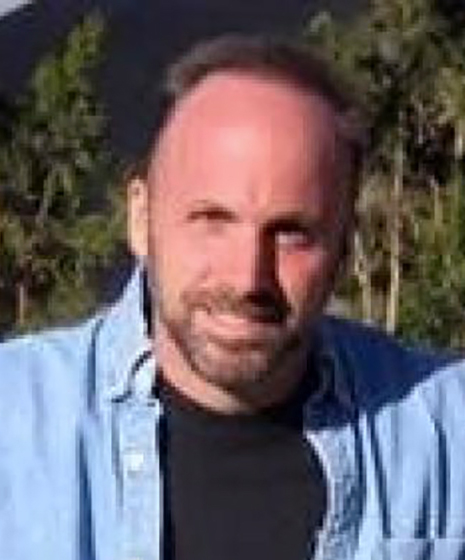 Fr David Bohnsack, mccj is a Comboni Missionary, currently serving in the parish of St. Joseph in Roehampton in the diocese of Southwark, United Kingdom.

I feel my missionary journey is something of God  riting straight on crooked lines. I was born in Chicago and grew up in a small town in Wisconsin, Jefferson, the youngest of three; I have one brother and one sister. I was baptized in the Lutheran Church and it wasn’t until in college, studying art and design, that I began to reflect more seriously about what I believe which ultimately led me to joining the Catholic Church.

I was always keen on following social issues of the day, something I learned from my parents, and it was during my first “real” job designing the landscaping for a complex of new condominiums that the situation of homelessness became prominent to me. I began volunteering at a homeless shelter and soup kitchen in downtown Chicago and that is where I met the Comboni Missionaries. There were students studying theology who occasionally came to help out at the shelter. There was also a community of Comboni Sisters in that neighborhood who occasionally came to the shelter and were active in the nearby parish. We struck up a friendship and my interest in the Church’s mission was kindled.

This was also the moment of the untimely death of my mother, which made me contemplate deeply the meaning of my life. My thoughts of helping out the missions turned to the desire of becoming a missionary myself. In reflection, I feel it may have been my mother and her Catholic, Irish roots that gave me that final push. I entered the Comboni formation in the fall of 1986 and finished my studies in Rome.

I was ordained on August 6, the feast of the Transfiguration, in 1994 and I witnessed a transformation also in my family members, many who had not understood my decision to become a missionary priest, afterward becoming great supporters.

In the first place was my father, who from the beginning was not in full agreement. At the celebration after my ordination, someone came up to my dad and said, “You are very lucky, there are not many fathers who can say their son is a priest.” His response, “Especially a staunch German Lutheran father”! I cherish that answer from him, who became my greatest advocate.

I was first sent to Egypt for two years studying Arabic, in view of working in Christian-Muslim relations. I then moved to the Sudan where I spent ten years in a parish of Darfur. The parish was huge, from my center in the town of Nyala, I would travel 300 miles to the north and another 300 miles to the south visiting 136 villages where Christian communities were forming. The humanitarian situation became increasingly worse, but it was countered by a great receptivity to the Gospel. There were Easter celebrations with no less than 2,000 adult baptisms in the parish some years!

As St. Daniel Comboni mentions, the first mission is like the first love and so much of what I experienced and lived of the faith I witnessed in the people there, is forever inscribed in my heart. I see that it was a time of providence. Those who had lived in very remote places, never having contact with the Church, escaping war in the south of the county, were coming to settle on the outskirts of villages in the west where we missionaries were visiting and, in a few cases, where we had not yet visited.

One day a man came to the church compound in Nyala for example, he said he was a catechist who had prepared a group for baptism, could we please come. I had never heard of his village before and so, together with two other catechists of the parish, he showed us the way. We stayed with them two days, examining everyone in the community, nearly 300 adults, to see that they knew the basics of the faith, which they did. The surprise for me was on the day of baptism, when the catechist who had come to search me out, was the first in line to be baptized, as he was not yet Christian. He was one of the few who could read, so when he came across a catechism written in his language of Dinka he learned it and had taught it to all the others!

From Sudan I took part in an organized sabbatical we call the “Comboni Year” in Mexico, followed by a five-year period of service in my  ome province of North America. In practical  terms it was impossible for me to get a visa to return again to the Sudan and my sights turned to Latin America. In 2011, to mark my fiftieth year, I made the 500-mile pilgrimage to Santiago Compostela in Spain, after which I left for Ecuador — the town of St. Lorenzo along the northern border with Colombia. This area has a particularly interesting history, predominantly Afro-descendants who had escaped to the mainland from a shipwreck off the coast and so they were taken from their homeland but had never been enslaved. It remains, however, a challenging and violent area, with illegal mining destroying the environment and constant homicides due to the cross-border trading of drugs and arms. Human trafficking, too, is prevalent. I never celebrated so many funeral masses; some months there were more than thirty!

My thoughts of Africa and a desire to return there never left me, and in 2014 I was assigned to Chad. I was once again in a parish covering a vast territory of almost a quarter-million square miles. My center was in the town of Abeche, in the northeast of the country; it actually extended to the border of Sudan, connecting to my former parish of Darfur! Many Muslims escaping the war in Darfur came to Chad around 2003 and still live in camps there today. I was invited to visit a camp one day and in asking how many people lived there, was told there were 90,000! And that was but one of the many refugee camps in Chad. There are an estimated 240,000 people who have not been able to return to their homeland in Darfur due to the continued unrest in the area.

In Abeche there is a youth center in the church compound set up with a library offering various activities, lectures, and classes open to both Christians and Muslims. The Christians in this area of the country make up only 1 percent of the population! That actual dialogue exists with our Muslim brothers and sisters is debated and I’ve experienced the difficulty of trying to organize a meaningful day of “leaders” (priests, imams, and pastors) to come together for a moment of sharing. With Christian and Muslim youth, however (those in their teens and early twenties), we have been able to organise and encourage encounters where they share their hopes and dreams for a better future together with original poems and songs, as well as performing skits that can touch sensitive issues with humor. Despite the many difficulties in establishing a dialogue with Islam, there are small steps being taken in Chad, of sharing and of mutual respect. These may not be grand undertakings that “make the news” but, nonetheless, they have an effect and are important.

I am now entering another phase of my missionary journey arriving in the London Province, I come with enthusiasm to face new challenges, sharing my faith, as well as knowing something more of the lands of my ancestors.