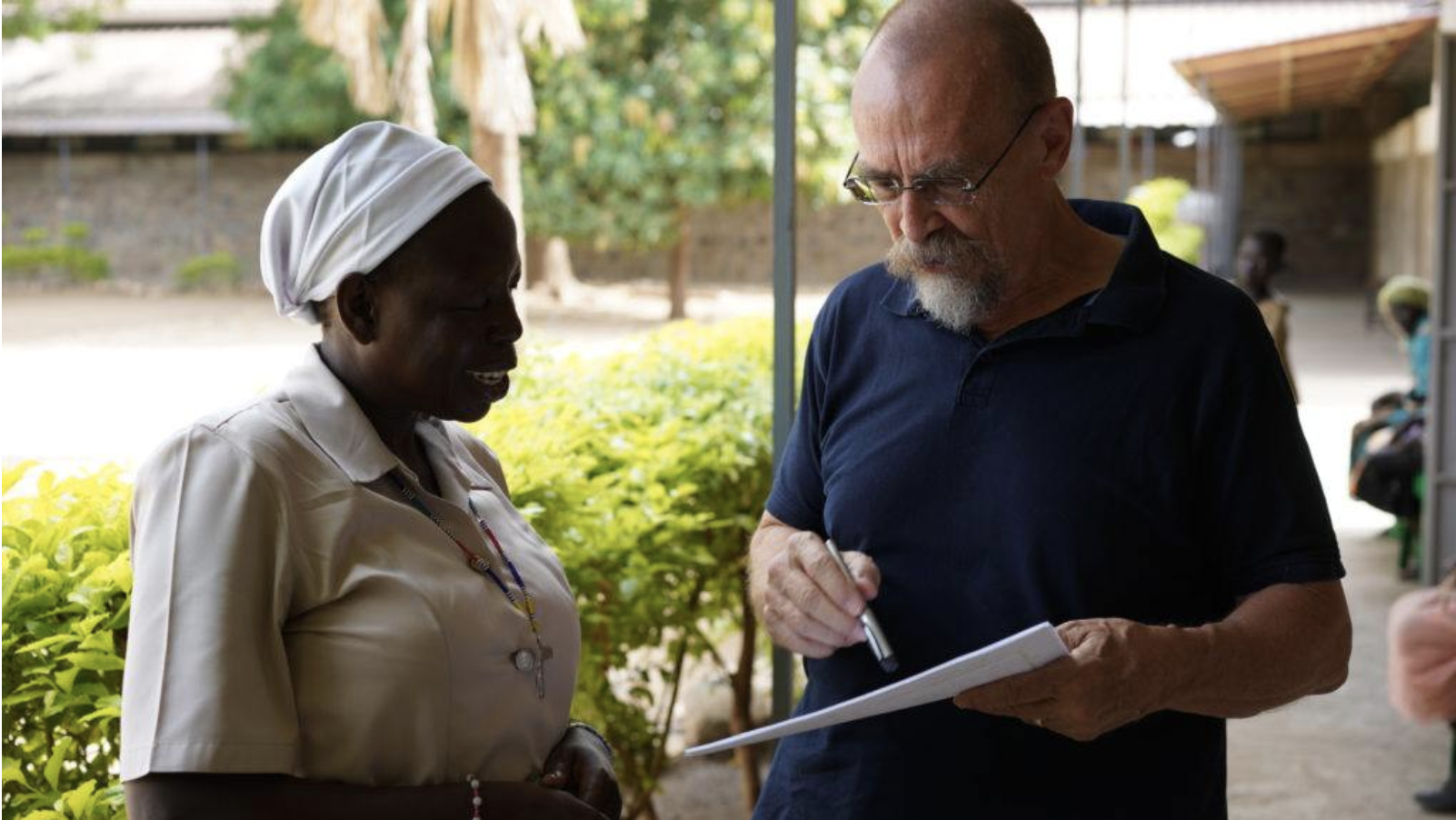 Sister Angelina Nyakuru became a fixture at Mother of Mercy Hospital in Sudan. It is the only referral hospital for more than one million area residents.

It has no ICU, no ventilators, no hand sanitizer, and often even lacks ordinary soap. And COVID-19 is coming to Sudan.

“This is very interesting, but
I am going to be a
doctor. This is not my
business.” 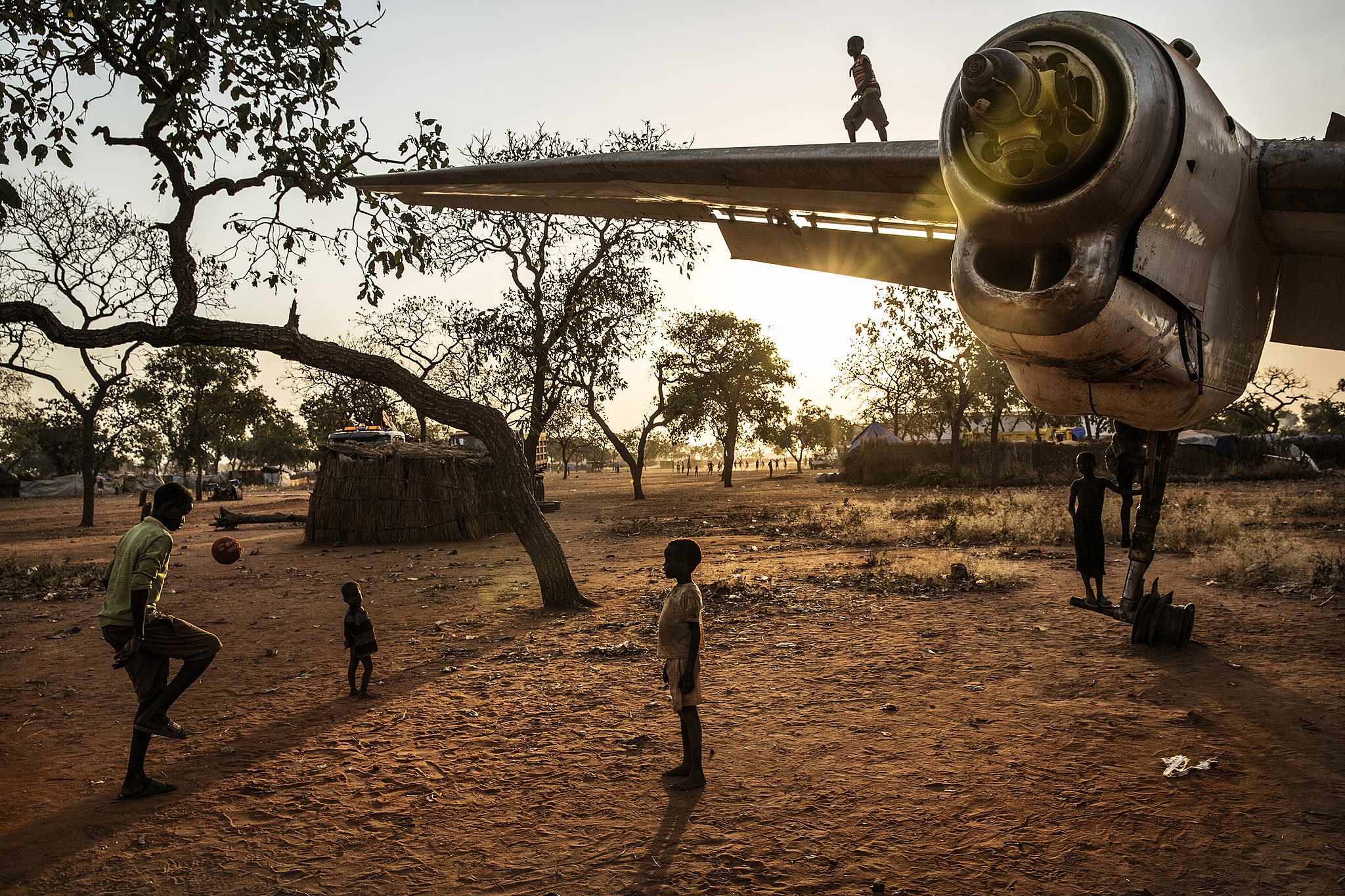 Children play on the wreck of an Antonov transport plane in the Yida refugee camp. These planes were used to drop shrapnel bombs on civilians almost daily.

More than 68,000 of the people who fled the Nuba Mountains are living here, about twelve miles away.

Sister Angelina Nyakuru grew up in Uganda. Her father died when she was just eight years old.

“Life was difficult, but my mother always encouraged us,” she says. “I prepared for my First Communion with the nuns and priests at the mission station of the Comboni Missionaries from Italy. There I met Sister Paola Cagliari, who was a nurse and she took care of people affected by leprosy.”

Leprosy carried a great stigma—as it still does in many parts of the world. Though not as contagious as its reputation would suggest, many sufferers face isolation and social shunning along with the disease.

Sister Angelina noticed that Sister Paola did not seem to have the fear that others had when it came to dealing with those who had leprosy.

“Every day,” she says, “she would pray with them and clean their wounds. I thought this was very strange, because in my culture leprosy was a curse. You are not supposed to go near people with it. Those affected are isolated and shunned. So, I remember wondering why Sister Paola was touching them. Deep down in my heart I desired to be like her, so that I could be close to these people who were suffering.”

This impulse to care for others had several hurdles to overcome, though. While Sister Angelina was inspired by the witness of the Comboni Sisters, she did not think that such a path was possible for her.

She says, “I told myself, ‘No. She’s white; I am black. She’s an Italian; I am an African. There is nothing that can make me do what she does.’” She says she immediately “rubbed the idea out of my mind.”

But, she remembers, “Many years later, when I was in high school, studying to become a medical doctor, I went to the school chapel to pray. I found a small pamphlet, and the first words my eyes landed on were, ‘If I had a hundred lives, I would give them for the Africans.’ I had discovered the words of St. Daniel Comboni. He was the first bishop of Central Africa, and founded the Comboni Missionaries. I thought, ‘This is very interesting, but I am going to be a doctor. This is not my business.’”

Sister Angelina continued on her path, studying for her college entrance exams. “But I kept thinking about the pamphlet. So I wrote to the Comboni Missionaries, telling them that something had touched me about this St. Daniel Comboni so much, that I wanted to become one of his followers. In 2000, after ten years of religious life, I became a permanent member of the Comboni Missionary Sisters.”

Sister Angelina was head of nursing at Mother of Mercy Hospital in Sudan, in the Nuba Mountains. The mountains lie along what is now the border of Sudan and South Sudan. But South Sudan had not yet acquired independence and the region was a perpetual battleground. Comboni Missionary Bishop Macram Gassis resolved to build a desperately needed hospital in the area.

He recruited several Comboni Missionary Sisters along with Dr. Tom Catena, an American working for the Catholic Medical Mission Board. Sister Angelina arrived in Gidel along with Dr. Catena in the spring of 2008 to open the 430-bed hospital.

Mother of Mercy is the only referral hospital for the more than one million residents of the area. Its location has made it a godsend to the people, but also a target for the military. The now-deposed regime of Omar al-Bashir accused the residents of supporting rebels, and launched a relentless bombing campaign that forced many to flee. Those that remained behind could not grow crops or raise animals because of the constant bombardment.

Sister Angelina says, “In 2015 there were rumors that northern soldiers were just 30 kilometers (19 miles) away and moving toward us. You could hear the big artillery. It was frightening. Everyone on the staff decided to leave, but Dr. Tom put up his hands and said he wouldn’t go.”

“So I told the Sisters I wouldn’t leave either,” Sister Angelina says. “All the Sisters stayed, and one priest. Everyone else relocated across the border for two weeks until things calmed down.”

“My calling began as a little girl when I saw Sister Paola serving lepers. And I was I so happy when I was sent to South Sudan, where my deep desire to help people suffering from leprosy was finally fulfilled. I was able to clean people’s wounds, to be close to them, and I was able to serve them. Sister Paola is still alive. She is very old, but she is the one who inspired me to follow this path to serve God and the poor.”