Into the archives – Cincinnati Reaches Out 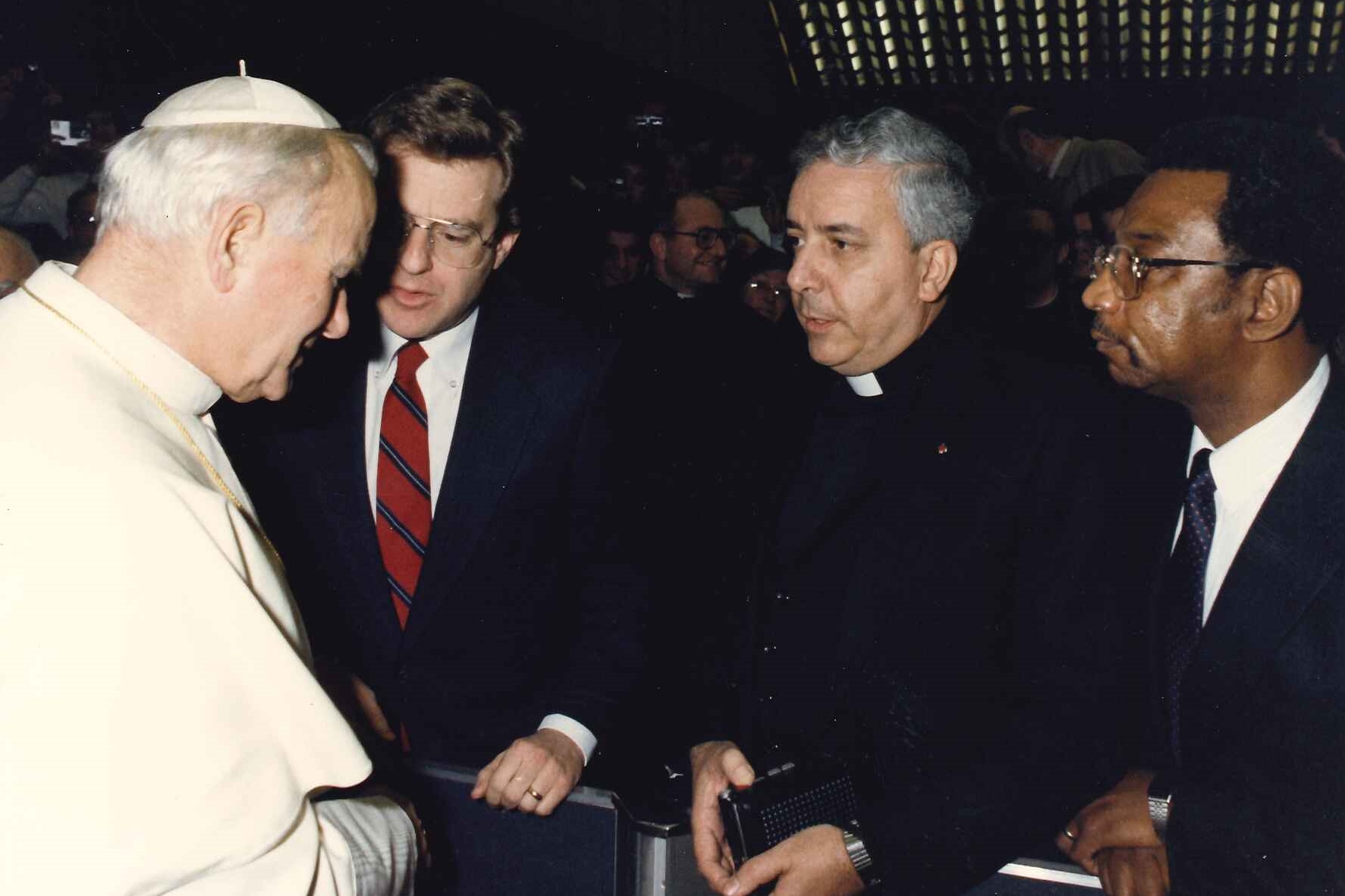 Considering that in a little over a week Pope John Paul II will be declared a saint, a Comboni story does come to mind. It was a big hit in the greater Cincinnati area and many of you will remember it.

It was 1985 and the world had just been stunned by the discovery of a catastrophic famine in Ethiopia. A wise and generous gentleman by the name of Robert Valentine, who was a wholesale pharmacist, told us that he and his business had a large box of medical supplies to give to someone in Ethiopia and that he would like to get in touch with Comboni Missionaries over there to ensure proper delivery. I was asked to take care of it.

From that moment, the events took on a life of their own. First, it was not just a box, but six tons of supplies. To send six tons to Ethiopia, money was needed. Senator Bill Bowen facilitated a press conference at our Comboni Center and everybody came. It was announced that we would personally deliver the supplies to the Comboni missions over there.

At that point, Fr. Charlie Walter, our provincial superior at the time, told me: “Joe, you’d better go with them and make sure that they get there and come back.”

That evening, at the closing of the 6 o’clock News on WLWT Channel 5, Jerry Springer, who was then the anchorman, read his usual commentary and announced that Channel 5 would tag along to document the safe delivery of the six tons.

Actually, it was easier said than done. So we all got together: the original donor, Channel 5 and myself. Tasks were assigned: The TV crew, headed by Jerry Springer, would foot the bill for travel expenses, Robert Valentine would provide the supplies, the Comboni Missionaries would manage incoming donations, and I would be in charge of logistics, namely, how to get there, what places to visit, and get back all in one piece. We also chose a name that would reflect the common purpose: Cincinnati Reaches Out (CRO).

There were a few obstacles along the way. It was 1985 and Ethiopia was a communist country. We still needed money for the freight. I had to find places to stay, people to meet, local travel permits and lodging once we got there.

Prompted by expert publicity, the people of Greater Cincinnati outdid themselves. Schools, churches, individuals too many to count, kept the money pouring in. The manager of the now defunct Emery Worldwide freight company, who was a Holocaust survivor (he still had his number carved into his arm) donated the freight to Rome and Alitalia picked it up from there. Senator John Glenn used his influence to get us entry visas into Ethiopia.

On our side, Comboni Bishop Armido Gasparini of Awassa, Ethiopia, who had taught just about anyone who held a degree in Ethiopia, met me in Rome with a stack of introductory letters for the director of the airport, the director of customs, a number of political and security VIPs in Addis Ababa.

The trip was a success. Upon our return, hosted by Saint Savior Parish, Jerry and I hit the trail to visit schools and churches that had contributed to the adventure. We showed slides and told stories. We also had TV specials that earned a local Emmy for Channel 5.

In the course of the next year, boosted by popular support, we repeated the adventure twice. This time we delivered 30 tons of supplies to the Eritrean fighters and the local population in the mountains. To do that, we had to fly the supplies into Khartoum, Sudan, drive them to Port Sudan, place them on smaller off-road vehicles, cross the desert at night and spend a week living in caves and traveling along dry river beds. The help of the Comboni Missionaries in Khartoum and Port Sudan greatly facilitated our task.

It was on the second such trip that it was decided we would seek an audience with the Pope. Thanks to the help of the Archdiocese of Cincinnati and others, we ended up in the front row where the Pope always stopped to talk to people individually. Our cameraman was given the privilege of standing with the BBC and a selected few worldwide TV greats, so we would have our own record of the event. Pope JPII encouraged our ecumenical and inter-cultural mission and blessed us.