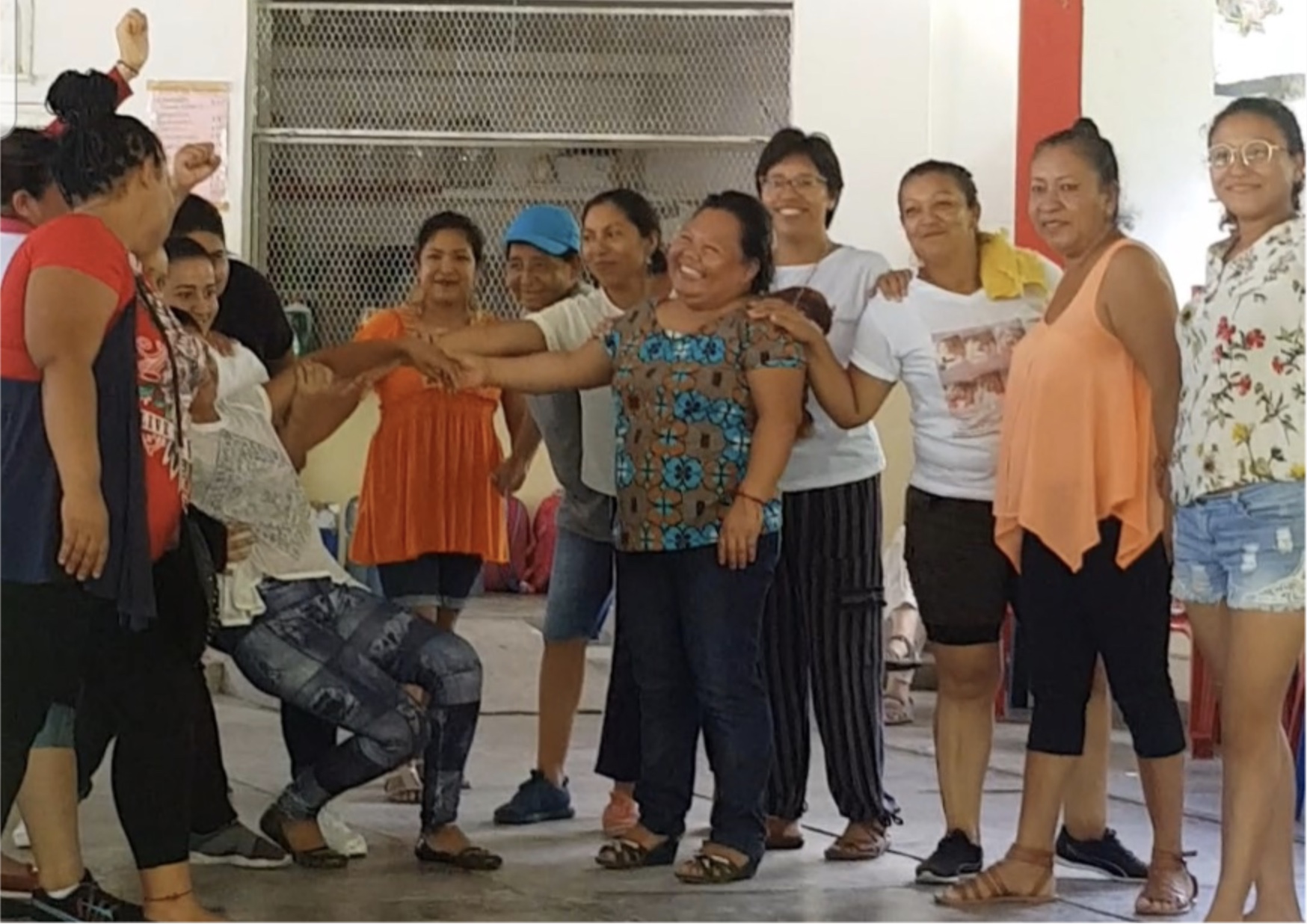 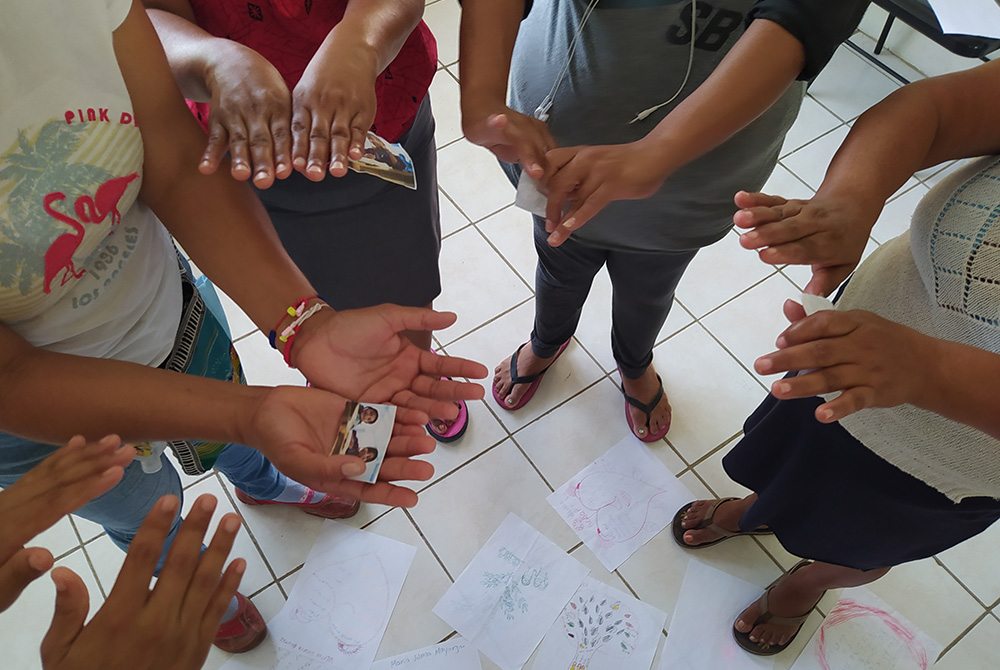 A group of women take part in a prayer to bless absent loved ones, as part of the Comboni Missionary Sisters’ “Effatá” program to assist migrants in Tapachula, in the state of Chiapas, Mexico.

Let us put our hands together: Let all those who love Jesus Christ share the same desire, the same goals, the same commitment.

The Diocese of Tapachula is in Chiapas, Mexico. The country’s southernmost state borders Guatemala and is a gateway for migrants fleeing Central America. 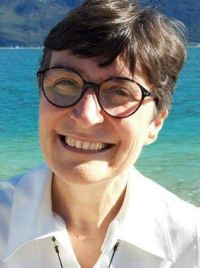 Comboni Missionary Sister who has worked for more than 20 years in Latin America. Presently she is sharing life with migrant women as she serves on the border between Mexico and Guatemala.

Every day, hundreds of migrants — young women, boys, and children arrive at the Bethlehem Shelter Center. The Tapachula Diocesan Center is not their destination, however. Coming from Honduras, El Salvador, Cuba, Nicaragua, Guatemala, and Haiti, they have something in common: They want to pursue the “American dream.”

Tapachula, a city in the state of Chiapas, is a place of transit. It is among the most dangerous Mexican border cities. Neighboring Guatemala, this small city witnesses daily the crossing of thousands of migrants from Central America, the Caribbean, Africa, and Asia.

The Comboni Missionary Sisters established a crisis intervention program called “Effatá” at the Bethlehem Shelter to assist and serve migrants. “Effatá” (“be opened”) — the Spanish form of the Aramaic “Ephphatha” — is a powerful word that expresses a desire for and a commitment for life. A community of four Comboni Missionary Sisters from Costa Rica, Mexico, and Italy welcome and provide support and compassionate care.

Three of the sisters are dedicated to listening and healing. Through spiritual and therapeutic accompaniment, migrants strive to integrate their trauma. Under the sisters’ care, migrants renew their hope, self-esteem, and courage.

Another sister teaches handicrafts. Most adults and children engage joyfully in art therapy and develop their creativity.

The intervention focuses on two stages. One is the accommodation of the population in shelters or refugee camps.

The other is the repatriation to their countries to help in the reconstruction process, or preparing them to continue their journey. The first stage of the intervention includes training health promoters and community leaders. Then, they learn to promote “crisis interventions” directly with affected populations.

The goal is to alleviate, empower and journey with them, and share life, while they wait for the documents to continue their journey of hope, toward safer destinations. The program helps migrants in the following ways:

The Mexican border is filled with the tears, nightmares and dreams of those who cross it daily. According to the National Institute of Migration, about 460,000 migrants crossed into Mexico in the first half of 2019 alone. Migrants seek asylum or ask to continue their way up north. In addition, young people flee gang violence, while others are forcibly displaced. Poverty, inequality, social unrest and lack of opportunities are other factors that cause people to leave their families and country.

Before the arrival of the caravans of migrants to the southern Mexican border in 2018, the Comboni Missionary Sisters participated in the campaign of humanitarian attention. From this experience, the sisters observed that the reception accommodations for migrants in Tapachula were few and limited. People encountered severe difficulties in finding shelter and food. Vulnerable migrants such as single mothers with young children, large families, pregnant women, unaccompanied children and adolescents, older people, LGBTI persons, and survivors of sexual violence face even more precarious situations. Tapachula is also home to the Siglo XXI (“21st Century”) migration station, where thousands of migrants are detained.

In response to the humanitarian emergency, the opening of the Comboni Missionary Sisters community in Tapachula began in mid-May 2019. Since then, our sisters have committed themselves to promoting migrants’ human rights in partnership with the shelter Hospitalidad y Solidaridad (“Hospitality and Security”), a space for refugees and asylum-seekers. In the last two decades, migratory transit through Mexico has become a critical human mobility phenomenon, both for its magnitude and the conditions under which it occurs. The massive migration flows have attracted the attention of academics and media. Understanding the causes and effects of migration, and the risks and vulnerability of those who enter the Mexican territory irregularly is crucial.

The “ordinary” transit of Central Americans, the so-called “caravans” or “exoduses” that started in 2010 and continued in 2018, 2019, and 2020, received mixed messages from the Mexican government. The government promised support and temporary residency to immigrants, but it did not provide security; instead it detained and deported them.

In 2020, the pandemic lockdown put migrants and refugee claimants at risk at the border and in detention centers. Stuck in the middle of the pandemic, they became even more vulnerable to violence, robbery, human trafficking and organized crime in the local Mexican cities they passed through.

When borders were closed, migrants were left unattended as centers failed to provide them with safety. Migrants also faced this situation in Tapachula. Feelings of incomprehension and despair, and loss of direction turn into open defiance. For the moment, stranded people, asylum-seekers, and refugees say that they are exchanging the “American dream” for the “Mexican dream.”

Through the women’s healing program, we see that when women lighten their emotional “backpack” load, their energy flows and healing happens. Some women arriving at the center carry an accumulated amount of pain, and at times, they cannot even breathe. As they process their pain, loss and grief, they regain a sense of worth, strength and courage.

Some help other women who are at the first stages of the healing process. We have seen women assisting fellow travelers. Some of the women who have been in the center become healers themselves. Migrant women know the importance of healing at this stage as their journey is still long. Once healed, they hold on to their dreams, even though they lack the resources to carry them out.

Much work remains to be done in the Effatá Crisis Intervention Program at the Bethlehem Shelter in Tapachula. Yet, we Comboni Missionary Sisters know that we are not alone. The spirit of Jesus and the solidarity of the world community strengthen us for service. To you, migrant woman, we say with tenderness, open yourself with renewed hope for a more humane world — effatá.