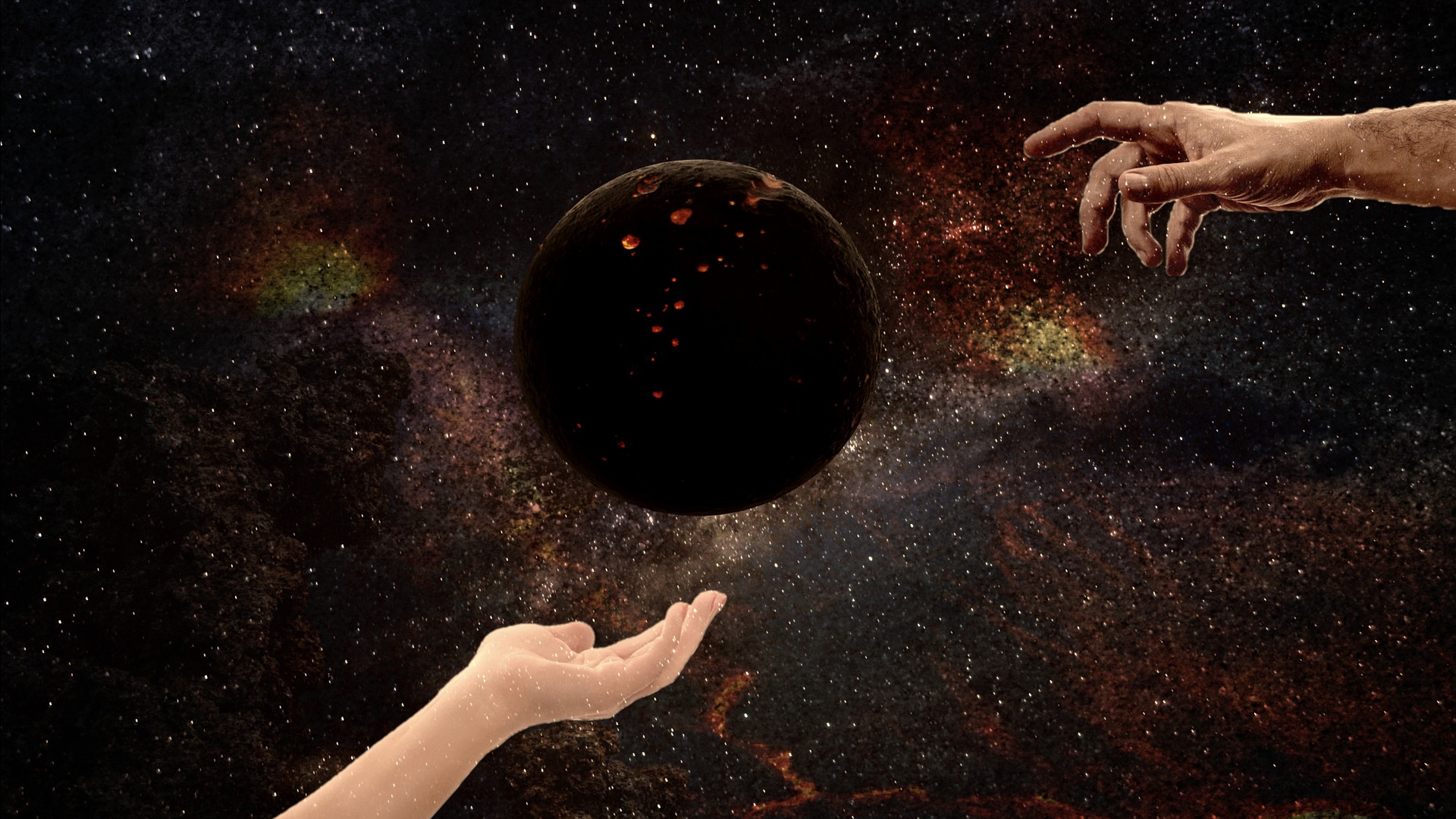 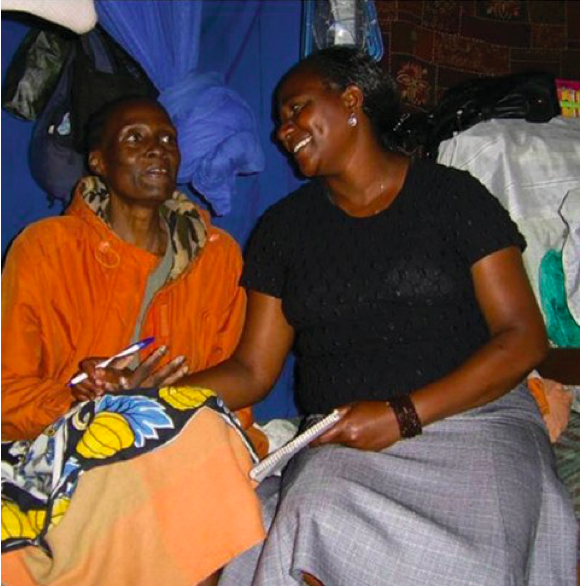 Fraternity is one of the fundamental principles of coexistence and a guarantee of survival in traditional Africa. (Image of a nurse visiting a patient at home.) 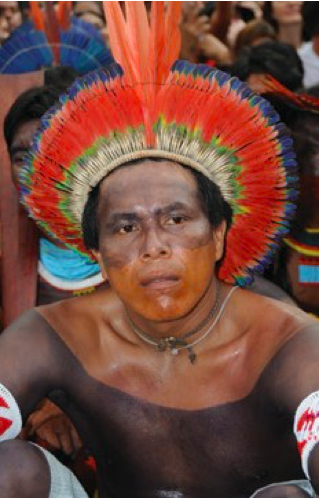 The ecosophies of the peoples of the Americas propose life in harmony with nature as their fundamental principle. (Image of an indigenous man from Amazonia in Brazil.) 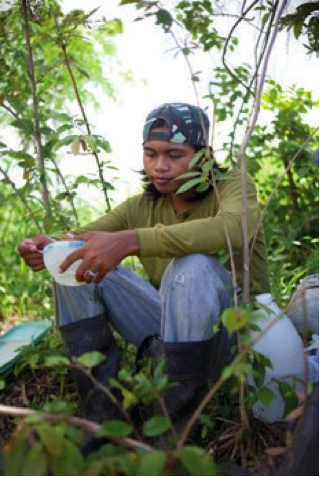 The ecosophies of the Asian continent promote the safeguarding of the social and natural environments, thus guaranteeing the salvation of the spirit of humanity.

What is the root cause of this ecological crisis? Surely, we can affirm that it lies on the devaluation of life and its meaning. Confusion and disappointment are fluttering in the hearts of many people, even though for others, this situation may provoke, in turn, an awakening and openness to new horizons of humanity.

Some people, thirsty for meaning and roots, turn their gaze towards spirituality as one of the sources to quench their thirst. Spirituality refers to the quality of being concerned with the human spirit or soul, as opposed to material or physical things. It seeks the integration of the human being’s thirst for unity and harmony; a willingness to care for creation; an openness to transcendence; a tension between the earthly life and the craving for salvation.

Pope Francis, in his encyclical Laudato Si’ (LS), invites us to turn to our interior life if we want to heal the world. He repeatedly promotes a culture of life or a way of being in the planet that protects all forms of life and cares for spirituality (LS 63, 64), and states that this is medicine for the ecological crisis. This search for spirituality moves our hearts to look for God and His presence among us. God imprints the seal of His creation through two calligraphies: the canvas of nature from where we can extract His mark, and the Word of God, a Word incarnated in the history of salvation, as we find it in the Bible. Both are papyri engraved with environmental characters (those sprung from creation in its beauty, as well as elements of nature present in the sacred texts), in need of being examined to generate a creative action (LS, 85).

In the light of creation and in front of the text of the burning bush, we take off our shoes with a humble heart and open our intelligence to contemplate nature and, with it, the One who is Beauty and Life.

God invites the human being to a spirituality of a new genesis through his loving epiphany: Creation becomes an environmental covenant that, through its care, transforms humanity (LS, 240). Finally, the trace of God’s Spirit is found in the cosmos which is, at the same time, his gift and vestige; wisdom that emanates from nature, or ecosophy. However, it demands that its message be interpreted, in order to nourish and motivate the fluttering of the spirit of the peoples.

Ecosophy is the wisdom that comes from the relationship of interdependence between the elements of the cosmos, God, and the human being, forming a cosmotheanthropic bond. As Raimon Panikkar (1994) affirms, it is about the relationship of the One with the Whole.

Indeed ecosophy, as wisdomspirituality, defines a mode of an integral relationship between nature and society; it engenders a healthy communion that cares for the common home (LS 78). If the human being forgets the essential elements that generate life, its immediate consequence is similar to the contraction of Alzheimer’s disease, the annihilation of history and the destruction of nature—an ecocide. Therefore, it is fundamental to recognise the ecosophy transmitted to us by peoples scattered throughout the length and breadth of the planet, who represent traces of the Good and the Truth and knowledge of an integral ecology.

The Worldview of Ecosophy
The purpose of this reflection continues exposing some of the cultural knowledge present in the different peoples of the world, which should be the points of reference for the human search for sense and global solidarity (LS 201).

The ecosophies of the peoples of the American lands propose life, in harmony with nature, as their fundamental principle; a diversity of narratives within a religious and spiritual sense of existence; the importance of education in knowledge and skills for life; a sense of the meaning of life and death; a hierarchy of values; justice, presented always as the way to restore order; forms of self-government based on uses and customs; a cosmo-vision of good and evil that articulates morality; and finally, the principle of identity, meaning that one is a person because one belongs to the community. All these values of life are reasons for a radical demand to care for and nurture a good living in the territories between the Pacific and Atlantic Oceans.

Moving on, let’s briefly explore the sub-Saharan ecosophy of Africa, especially in the Bantu tradition which comprises more than 400 ethnic groups. The heart of their perspective is found in the Sotho proverb, Motho ke motho ka batho babang (a person becomes a person because of other people), referring to those who contribute in making one a human being. So, the identity and relational values of the Bantu spirit are defined in the light of the Ubuntu/botho (humanity) ecosophy.

Indeed, some central elements of this African cultural knowledge are: the interconnection and communion as founding the fundamental values of the tribe; the community as the origin and destiny of the individual and the inalienable duty to become fully its member; the value of the family, in a broad sense; fraternity as a principle of coexistence and a guarantee of survival; communion between generations: the past, the present and the future, and the ancestors; group solidarity in the daily struggles; ecological harmony as essential to life, i.e., the prayers and rites propitiatory for, for example, a good storm.

It is the cosmo-vision of Ubuntu-humanity that creates the community of people and, therefore, forms the individual (Nontobeko 2006). Finally, Africa is the land where life dances to the rhythm of the drum.

In the same way, the European continent is home to movements that signify old/new values that prevent forces, in a particular way, against an environmental destruction. So, the fruit of this encounter/divergence, as far as ecosophy is concerned, interweaves the following paths: the search for a balance between matter and spirit; the education for the care of the biosphere; the common good as an ecological principle; the value of an eternal instant that combines yesterday’s and tomorrow’s time; the constant change of cultural paradigms; the promotion of solidarity-based economies; proximity as an integrating element; the demand to link truth and politics; and the relationship between the environment and religious belief (Maffesoli 2017).

The European paradigm incorporates action that tends to heal the relationship between society and nature, going beyond a simple respect for the ecological, toward an integral care for creation.

The Asian continent, sanctuary of important spiritual movements (Tianchen 2003), proposes the following founding elements: nature is endowed with a capacity to harmonize itself and its balance is the moral criterion for human relations; there are vital rhythms that need to be respected; a principle of benevolence that demands a healthy relationship between humanity, earth and heaven, for the flourishing of the Pure Earth; frugality, as a demand that limits human excess; the person is not the master of nature; the need of harmonious coexistence with other living beings and the fact that truth is reflected in human actions. In short, it promotes the safeguarding of the social and natural environments, thus guaranteeing the salvation of the spirit of humanity.

After reviewing the values of the main ecosophies throughout the planet, we may consider the need for integrating them towards an ecological spirituality.

Ecological Spirituality
Humanity is facing the problem of an environmental uprooting, i.e., the lack of ground, identity, history and spirituality. Uprooting is the process in which people lose contact with their own vital roots, those that define them in a socio-cultural and geographical environment. It produces evident effects such as political indifference; ethical relativism; objectivism; domination of the quantifiable; migrations caused by ecological reasons or habitat destruction; degradation of justice; adoration of power/money; lack of creativity; absence of religious inspiration and depersonalization.

The person loses one’s vital references and habitat, one’s place of cultural and historical coexistence, producing a suffocation of the fluttering of the Spirit. However, it is in the common home or territory where the human being takes root, grows, and dies as an incarnated spirit that loves life by rising to transcendence.

Spirituality becomes a well that contributes to satiate the human aspiration for a better environmental world, from the ontological demand of unity in diversity.

This implies some prerequisites: human greatness that creates communion; care for creation; seeking quality lifestyles; enjoying sobriety as an authentic mode of existence; incarnating a mystical prophecy; fighting for the common good; promoting peace and learning to rest (LS
222–227).

Spirituality is thus the oasis where the ecosophies brought by the pilgrims of life converge. It is the oasis as a propitious space-time that breaks down all barriers and creates the persona of the common home. Spirituality is the place where the traveler dwells and is nourished, where the person lives together with others and prepare themselves to resume again the adventure of life, in the communion of the One with the All.