Counting the Cost of Covid-19 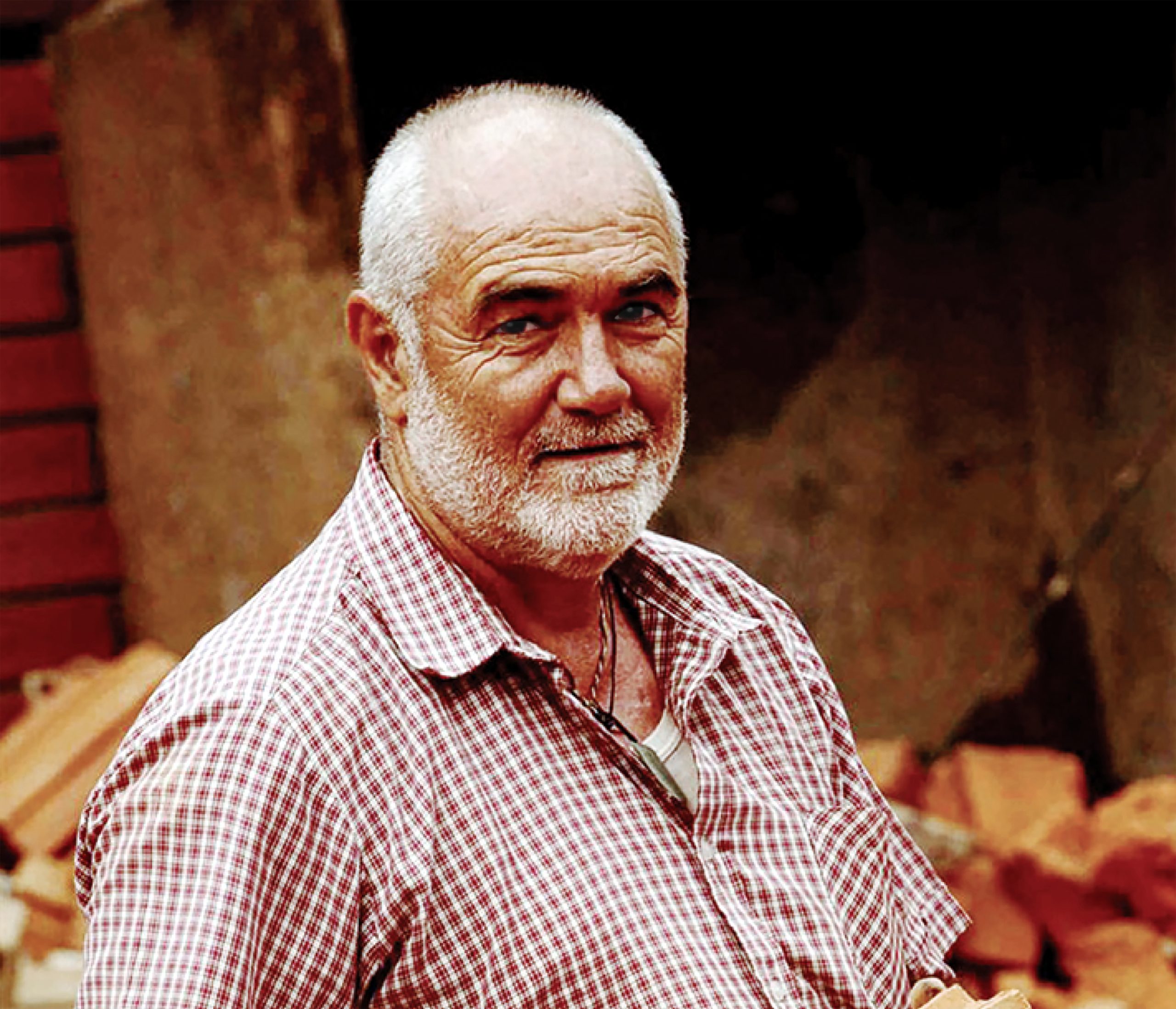 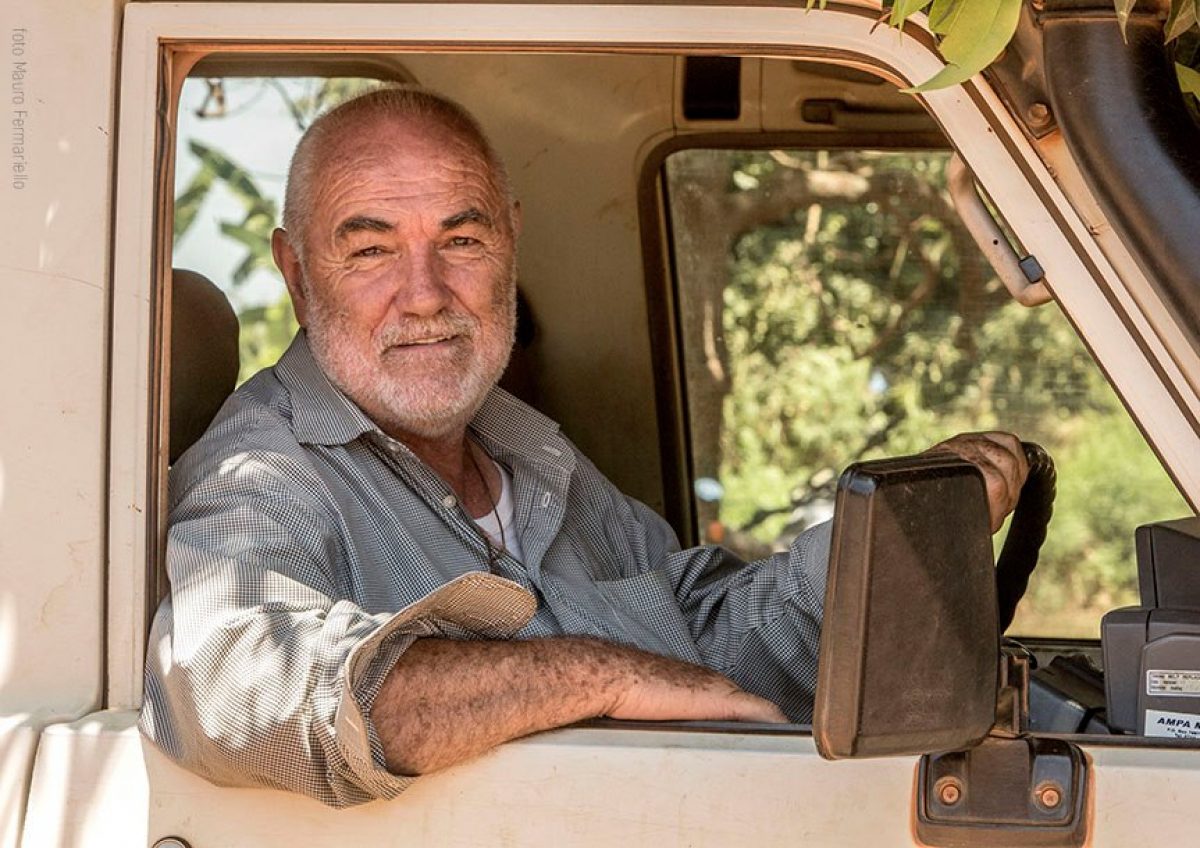 “It is very sad that we lost you, Brother Elio. Your charisma will never be forgotten… We will forever miss you.”

“Those kids—who can handle them the way he was doing? So sad.”

“A man who served Acholiland with dedication and unending affection for a people who became his own. RIP.”

Sixty Comboni Missionaries have died due to the Coronavirus with around 350 infected. Many of them spent their whole lives in Africa or Latin America. We remember three of them: Brother Elio Croce, Father Carlos Bascáran, and Father Aranda Nava.

The sun is setting at Lacor Hospital in Northern Uganda. Brother Elio makes his way home after a long day’s work. He is worried about the dreadful news coming from Europe. A virus from China is infecting thousands of people and claiming hundreds of victims. The virus is spreading rapidly. Brother Elio still has vivid memories of what happened in 2000 when the Ebola virus struck Northern Uganda and caused hundreds of deaths.

Lacor hospital is hit hard. The doctors and nurses were among the first to die. Elio knows the new virus will soon appear in Africa. He wonders how he can prepare for the virus, but details are still lacking. Going to his room, he turns on the old wireless that has been his companion for so many years.

Brother Elio Croce first arrived in Uganda in 1975. He has spent forty-five years in Africa, first as technical director of Kitgum Hospital and then, starting in 1985, of Lacor Hospital.

Elio has shared all the events that have affected the Acholi people in these. For them and with them, he built hospital buildings, dug wells, and established technical and agricultural projects. He shared with the Acholi people the terrible decades of the guerrilla war; he helped them bury their dead. He has lost count of how many miles he has traveled throughout in his old Toyota. The Toyota has lost count, too.

Brother Elio has always been attracted, moved, and upheld by his faith in Divine Providence. His firm, unfailing faith has been an inexhaustible source of nourishment for a life given totally for the African people. His is a world of building sites, carpentry workshops, mechanics’ sheds, and all that comes with maintaining the medical equipment in his charge.

During the war years, when no supplies were available, everything had to be fabricated from what bits and pieces could be found locally. Brother Elio was very capable. He knew how to do things and how to teach others, but he insisted on having everything done properly. By so doing, he helped in the development of the local area. Many were trained at his school; there they learned a trade and also began to appreciate work as an art form. With his encouragement, many small businesses and projects were fostered. His workers worked hard and well, and soon became independent.

The people knew they could count on Elio. Many pursued their studies thanks to him. His simple and direct manner was sometimes sweetly rough though totally honest. He was a man of no frills; the experience of a life dedicated to Africa covered him as completely as dust covered his sandals. He challenged and won over (often for life) anyone who approached him. He left no one indifferent; there was always an encounter with his choice of life and a feeling of being at one with him, even with those who disagreed with him. 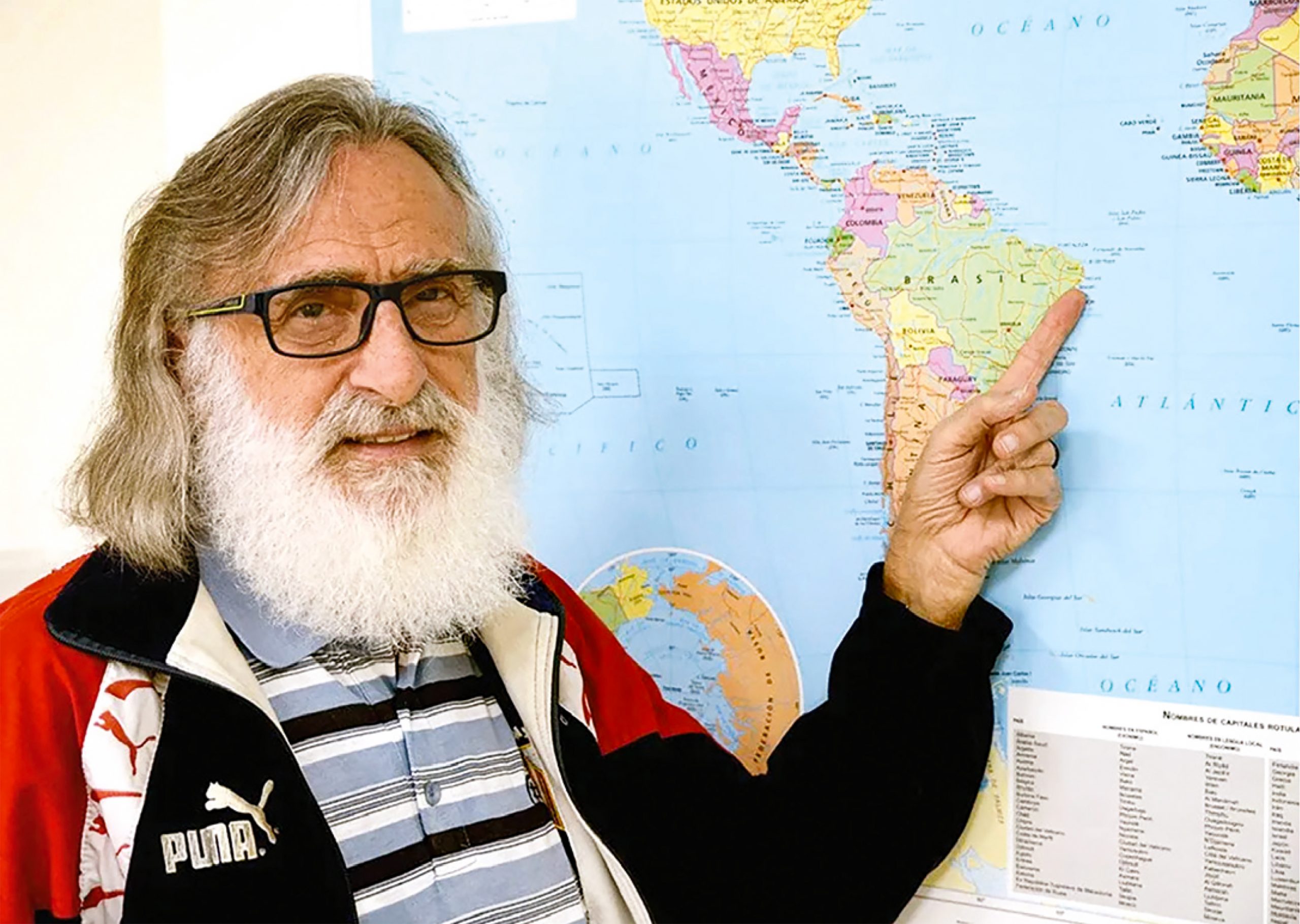 Father Carlos Bascarán Collantes was a vibrant presence in his community. 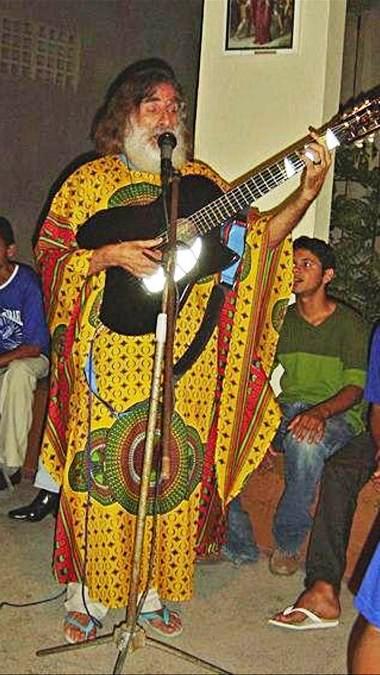 He is known by everyone for his long hair and sandals as he walks the streets of Salvador de Bahia in Brazil. Wearing the “shoes of the mission” for him means being on the side of the poor and humble people. It means keeping one’s feet firmly on the ground, in the dust of the roads. As he walks, he sees the small boys playing soccer. They see him and kick the ball to him. He controls it perfectly and skillfully passes it back. The sound of music is coming from one of the houses. He knows that tune; he has played it often.

His two great interests: football and music. As a young man, Spanish Father Carlos Bascarán Collantes was a professional footballer and fascinated spectators with his skills. Some believed he would have a wonderful future playing for one of the teams in the La Liga Española.

His musical talents were also well known, and his guitar was always by his side. His presence was always a celebration. Cheerful and enthusiastic, he made friends easily, especially with the youth and especially through his music.

He would say to the young people: “You must always be in harmony and sing the right notes to be together without being afraid of making mistakes. Music brings us together and makes us feel more like children of God and members of our communities. Music always carries with it love and liberation.”

For six years, he was the provincial superior of the Comboni Missionaries in Brazil. His colleagues remember him well: “Those were complicated and difficult times for him. His critical attitude towards the civil and religious authorities led to clashes, but he was always spontaneous and sincere.”

A man of great ideas, both during and after his mandate, he gave new vigor to the province both in the field of formation and missionary animation, while aware of the limits. He would say: “The mission is like a performance of a symphony. The music is perfectly written but the musicians are limited and often out of tune. However, this does not mean we can’t try to play perfect music.”

The coronavirus tore through Brazil for months, reaping thousands of victims and infections. During all that time, Fr. Carlos refused to stay indoors; he went to visit the communities, offering advice and support. It was important, he felt, that people should see their priest among them in those difficult times. He had been ill for several days, and was eventually taken to João Pessoa Hospital suffering from the virus. To date, over 600,000 have died from the virus in Brazil. Much of the blame has been laid at the feet of the political authorities for indifference and lack of immediate action to curb the pandemic.

Fr. Carlos died late in the afternoon on Tuesday, September 22, 2020. He was 77 years of age. He had spent forty of them walking the back streets of Brazil in his humble, dusty missionary sandals. 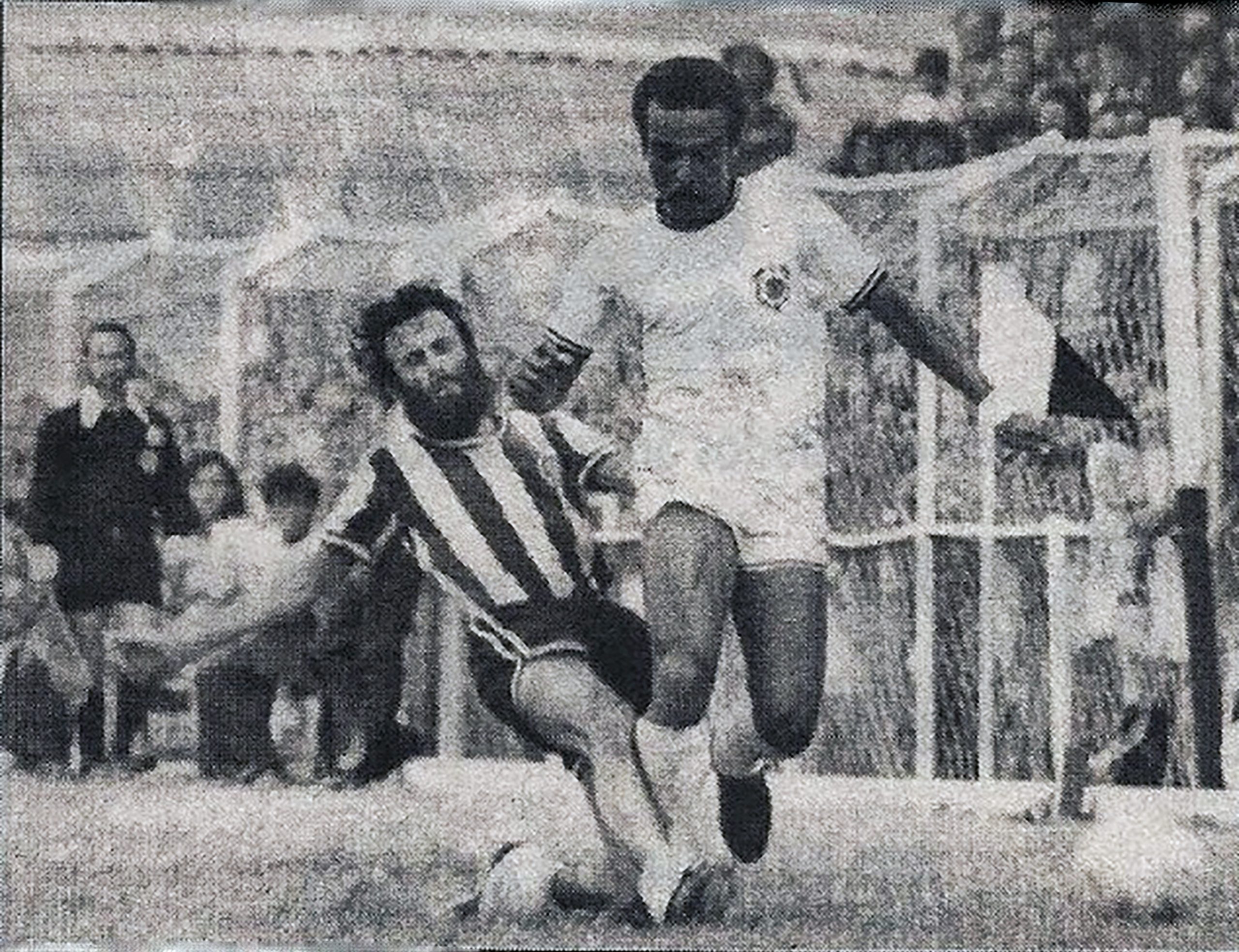 Carlos was a “radical” missionary, with a charming sort of outlook. He was humble. Far from any exhibitionism, he always wore flip-flops that represented, for him, the footwear of a simple and poor person but above all of a disciple, of an itinerant and humble follower of the Master!

For him, the missionary had to be radical even in outward appearance. Wearing flipflops meant always being close to the poor and humiliated, rejecting a consumer mentality and always being alert, ready to leave for new places and to face unprecedented challenges without the shoes of pride, bags of material goods, or the clothing of vanity, etc., but possessing only one’s own willingness to serve and welcome everyone. 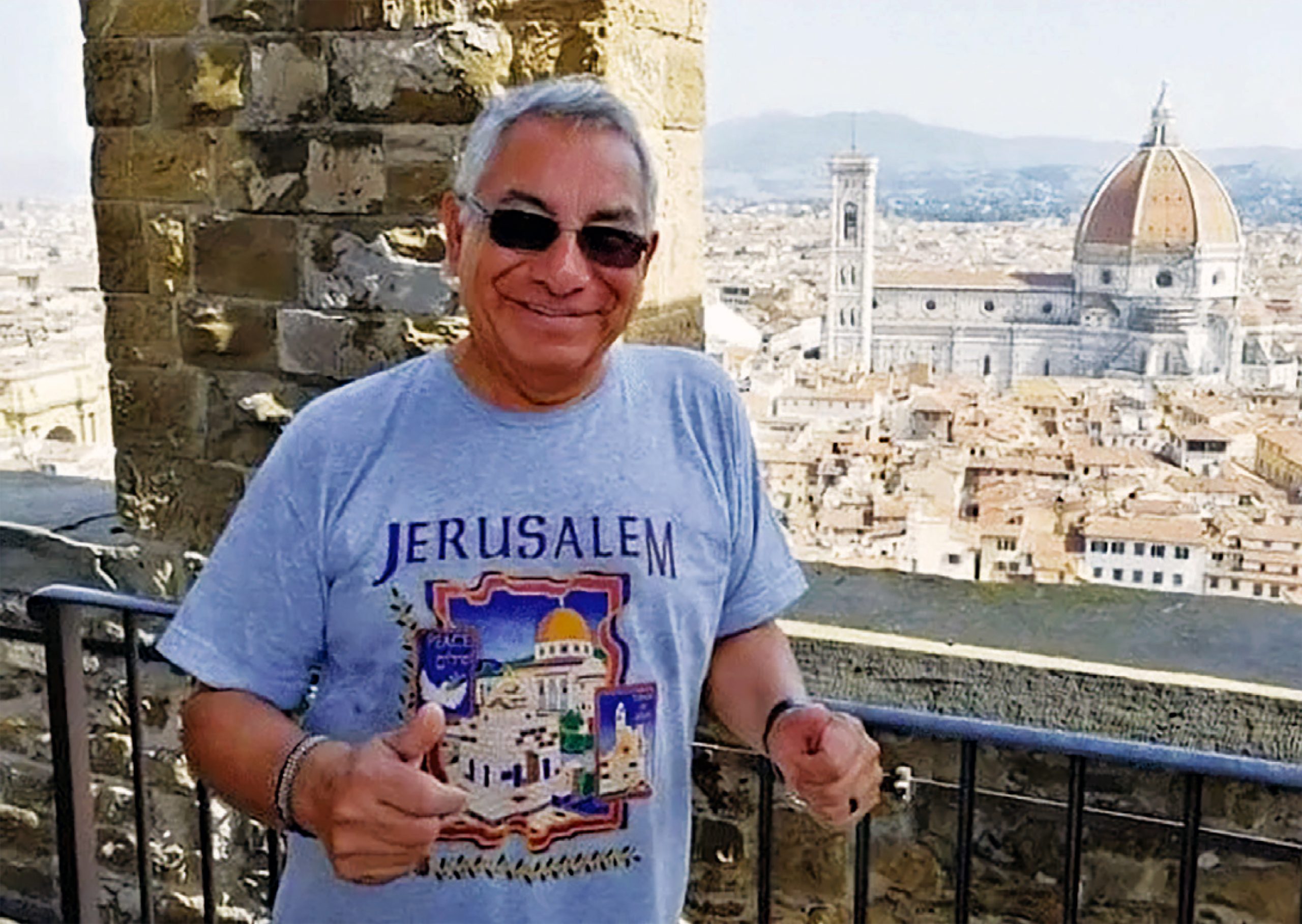 “We have left our mission of Kajo-Keji in South Sudan and now we are with our people who live in the refugee camps in the north of Uganda. Like them, we are homeless people and refugees.” 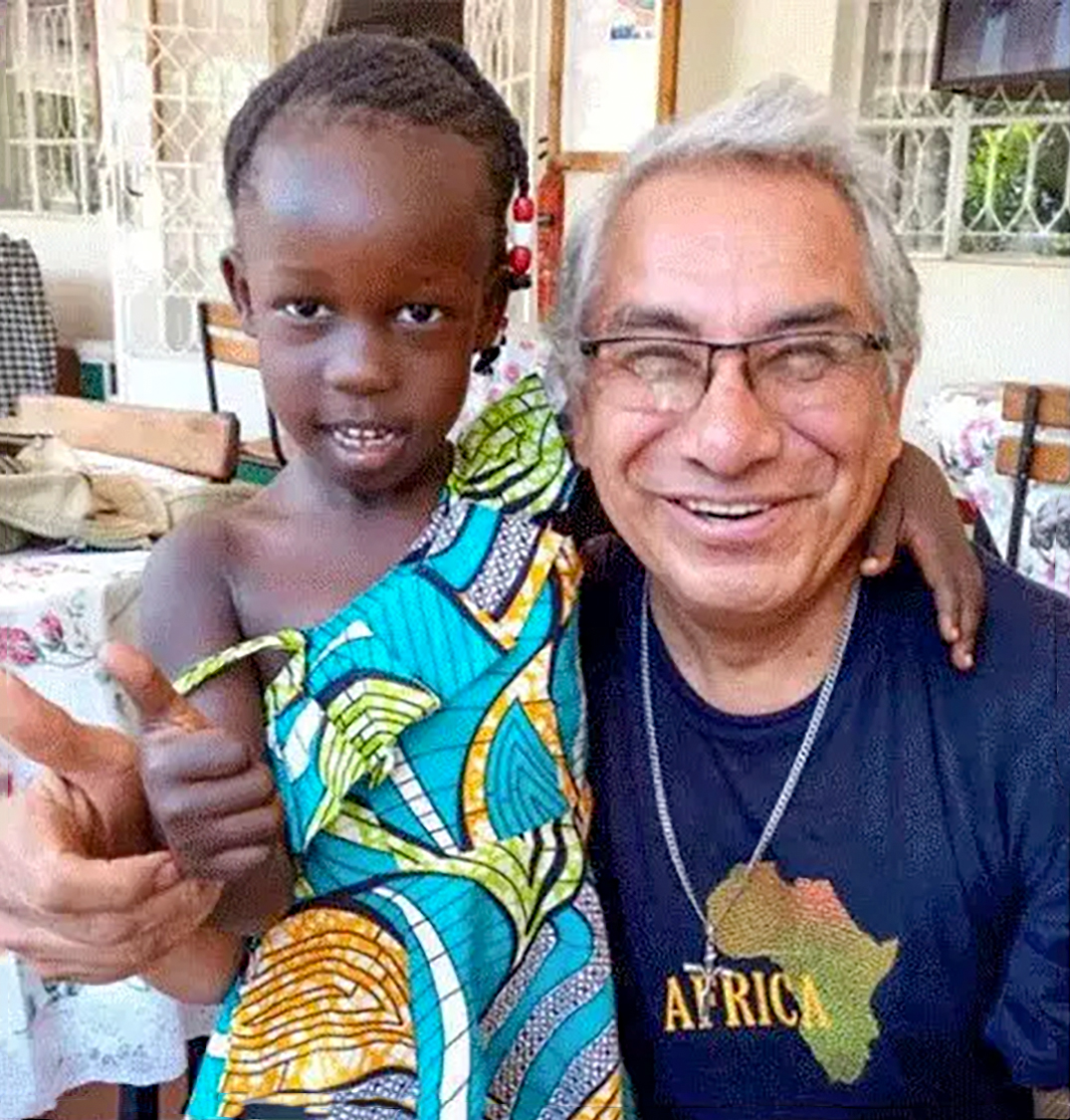 José de Jesús Aranda Nava was known for his contagious smile and love for the people he served.

The sound of gunfire is coming closer. Billowing smoke can be seen in the distance. The area has become a battlefield between the government forces and the rebels. The missionaries realize it is time to go.

They gather their few possessions and start walking toward the Ugandan border. Amid the many dangers and ever-present fears, Fr. Aranda writes: “After walking for days, we reached the Bidi Bidi refugee camp. Living like refugees is a new experience for us as a missionary community.

“We have left our mission of Kajo-Keji in South Sudan and now we are with our people who live in the refugee camps in the north of Uganda. Like them, we are homeless people and refugees.”

Mexican Father José de Jesús Aranda Nava first went to Sudan in 1984. His main apostolate was the training of the Comboni postulants in Juba and Khartoum. In 1992, he was expelled with other Combonis by the Muslim government of Khartoum, in Sudan. Once back in Mexico, he worked in the formation of future missionaries as well as in missionary animation.

He is remembered as a man who was always smiling. He would always speak enthusiastically of his missionary work in Africa. In 1999, he returned to Africa and devoted himself to the formation of young missionaries first in Sudan and then in Kenya. Lastly, in 2007, he arrived in the parish of Kajo Keji, South Sudan. There he worked tirelessly training catechists and managing a number of schools for boys and girls.

On the feast of St. Daniel Comboni, he wrote on Facebook: “Comboni Day: 10 October 2020. The holiness of Comboni is lived out in communion with suffering humanity. St. Daniel lived his holiness in solidarity with the suffering and the ill-treated. In the course of our history, the sons and daughters of St. Daniel Comboni have sought to follow the path of holiness, sharing the daily life of their suffering brothers and sisters.

We have great people who are fine examples of making common cause with the people: Fr. Giuseppe Ambrosoli, Fr. Ezekiel Ramin, and many more.

Today, we are called to share in holiness, the life of so many people who are faced with the crisis of the coronavirus pandemic and its consequences. We are in communion with the migrants and refugees, the populations in areas of conflict and war. Let us carry in our hearts the burden of suffering of the Church and the sad situation of the environment and all creation. Pray for peace and brotherhood between our people and South Sudan.”

He was urgently taken to Lacor Hospital in Gulu where he was admitted with the coronavirus infection. He died on November 4, 2020. He was 68 years of age.

Biographical information for these missionaries originally appeared in World Mission. Used by permission.