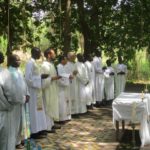 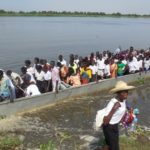 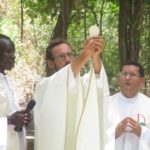 A group of young Comboni Missionaries who evangelize in different missions across South Sudan attended a five day workshop on “personal integration of values and communication dynamics in the mission.”

The group of young evangelizers, brothers and priests, meets every other year to share missionary experiences and reflect on a particular topic as part of their ongoing formation.

Fr. Vincenzo Percassi, a Comboni Missionary in Ghana, facilitated the five day workshop that was held in Juba April 20-24, 2017.

This workshop has been placed within the celebrations that mark the 150th anniversary of foundation of the Institute of the Comboni Missionaries. This was an opportunity for them to reflect on the generous work of many missionaries who offered their life for the mission in South Sudan over the past 150 years.

On Sunday the group of young missionaries joined the Christian community of Gondokoro, a community located some 20 kilometers outside Juba on the east bank of the Nile. They longed to visit the place where the pioneering missionary and inspiration for St. Daniel Comboni, Fr. Angelo Vinco, opened a mission in 1849 which gave birth to the Catholic Church in South Sudan.

Hundreds of people from the three Christian communities that inhabit the island in Gondokoro crossed over the Nile and met the missionaries near the burial place of Fr. Angelo Vinco where they celebrated the Eucharist. It was a joyful day for both the community and the missionaries.

Fr. Louis Okot, the Provincial of the Comboni Missionaries in South Sudan said “this visit to Gondokoro arose in each missionary the feelings of joy and pride for being a Comboni Missionary as they touched the soil where a priest, Fr. Angelo Vinco, who inspired Comboni to shift his mind from being a missionary in Japan to come to Africa, lived and proclaimed the Word of God among the Bari community with courage and perseverance. Another missionary who was in that island with the same age as the young missionaries was Fr. Knoblecher. His life got consumed there and he died under 45, as a servant of the Gospel.”

Fr. Vinco made three journeys on the Nile to the village of Gondokoro between 1849 and 1853 when he died at the age of 33. He had a great impact on the Bari community that loved him so much and still remembers him so dearly as their father in faith.

The workshop was closed with the Eucharistic celebration at which the Scholastic Mario Pellegrino renewed the religious vows of poverty, chastity and obedience for the mission.

Fr. Okot said “together we feel that a life given to Jesus and his people is a beautiful life and it is a life that gives joy.”

After the workshop the young missionaries will return to their respective parishes full of enthusiasm and passion for the mission where they are called to witness Christ with the same joy and generosity as Fr. Angelo Vinco and St. Daniel Comboni.