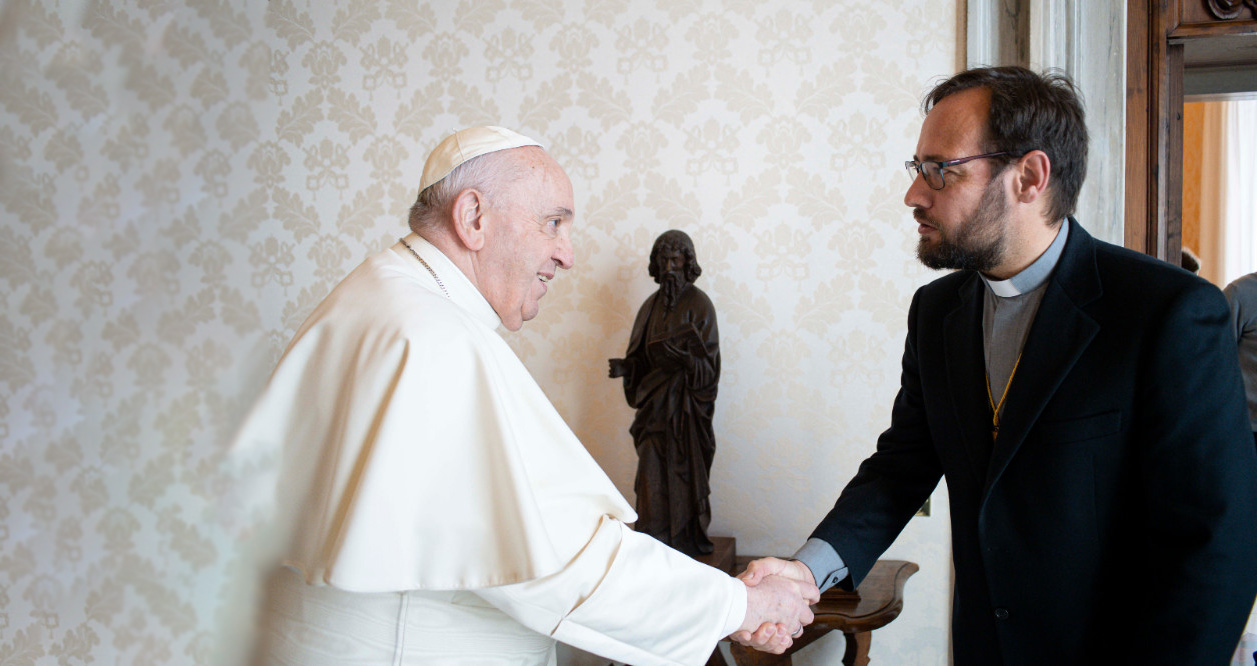 Pope Francis meets Bishop-designate Christian Carlassare at the Vatican in March. The meeting took place almost one year after Carlassare was shot following his appointment as the new bishop of Rumbek, South Sudan. 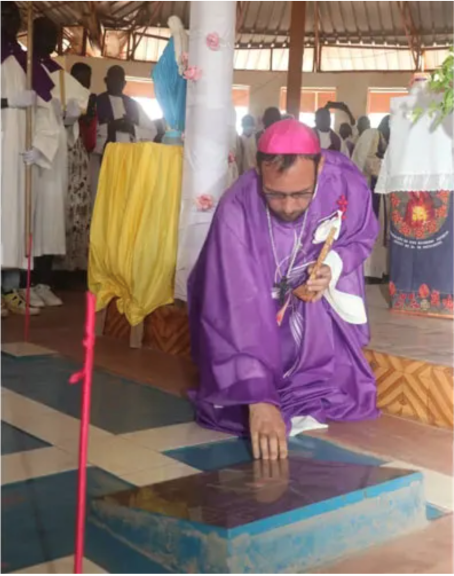 Bishop Christian Carlassare placing a cross on the grave of his predecessor the late Comboni Bishop Caesar Mazzolari in Holy Family Cathedral at a Mass following his episcopal ordination.

“They hit the muscles in my legs but missed any vital areas. This was a moment of grace, because it gave me the humility to be like the people, bearing the same wounds as the people.”

South Sudan and its New Bishop Get a Fresh Start

“I look at South Sudan with optimism,” says Comboni Bishop Christian Carlassare of Rumbek. At a media roundtable in April, he noted South Sudanese President Salva Kiir’s recent success in unifying the army was a “significant step forward” in the peace process.

The forty-four-year-old Italian met with Pope  Francis at the Vatican in mid-March, just ahead of his episcopal ordination in Rumbek on March 25.

“The pope just told me not to be afraid because the Lord provides, and then he gave me his blessing,” said Carlassare.

Carlassare, whose service in South Sudan predates the founding of the country in 2012, is doubtless grateful for the papal blessing. He returned to his new diocese after recovering from serious wounds received in an attack in April 2021, just before his episcopal ordination was to take place.

When two armed men broke into his home in the middle of the night, he says, he tried to talk to them. “But they cocked the gun and shot me in the legs. Then they fled. They were not here to steal or kill me because they would have killed me easily,” he told Agencia Fides. “The Lord guided the bullets,” he adds. “They hit the muscles in my legs but missed any vital areas. This was a moment of grace, because it gave me the humility to be like the people, bearing the same wounds as the people.”

South Sudan, the world’s youngest country, has weathered a barrage of political storms, with violence driving millions of refugees from the region. In September 2018, Kiir and his chief rival, Vice President Riek Machar signed a peace agreement, brokered in part by the Vatican. Military forces backing each leader have been fused into a single united force. However, peace has been slow in coming.

Tribalism, says Carlassare, is one of the driving forces behind the conflict. “Everyone talks about peace. There is no open war, but there is violence that is still concerning. . . . Tensions have decreased,” he says, “but they reappear.” Those who fled violence in one region may have displaced others or they may cause strain on available resources. In this way, even old conflicts can still have an impact and perpetuate themselves.

“Differences between clans and tribes shouldn’t be a problem, a community must be created where people can live in peace and safety without those conflicts,” he said, highlighting the role of the Church in promoting peace.

In Rumbek, and throughout the region, the Catholic Church and the Comboni Missionaries have had to provide for the people. Development projects, schools, parishes, promotion of education for girls and women, healthcare and sanitation — these are areas in which the people know they can rely on the Church, Carlassare says.

“There is much work to be done for the population to stop suffering because of the conflicts, instability, endemic poverty and lack of services,” he said during his episcopal ordination. “The attack I suffered was a clear sign of this.”

Despite the challenges faced by the Church in South Sudan, though, the new bishop notes, “It can count on the solidarity and resilience of the people. It is a wounded and suffering Church, but there is no lack of faith and hope in healing. It is a young Church that has a long way to go before it. It is a fragile and imperfect Church that experiences the compassionate love of God and is called to be a witness of mercy.”

Carlassare describes that attack as “not only a physical wound, but in the heart. . . . As a person I was hurt for personal interests.” He said he is “not closing my eyes to what happened,” but moving forward with forgiveness and a desire to heal. After months of medical treatment and therapy, he says he can walk normally, but still receives physical therapy. He sees this as an opportunity for a new start. “For me, restarting means forgiving because without forgiveness there would be no restarting. Mercy, on the other hand, becomes the ability to establish relationships and rebuild relationships from where they were interrupted,” he says.

Pope Francis’s planned July visit (since canceled) was another new beginning and a source of hope for Carlassare. He had hoped the visit would “give an important impetus to the process of pacification that will affect all communities, especially those that are most discouraged and most marginalized.”

He told Vatican News that the visit could “be a great encouragement for the Church to be a real instrument of reconciliation and peace through the many works already present in the country, from those of evangelization to those of promoting the integrity of the human person.”

As to security concerns for the pontiff’s visit, Carlassare said, “I am confident. The logistics will be difficult, but Africa has shown we can do anything.”